Samsung is preparing to launch a smartphone called Galaxy M51 and there are plenty of rumors going around but only a few leaks from trustworthy sources. Finally, we have something more substantial as the phone appeared on Google Play Console with some key specs.

The new midranger will have a Snapdragon 730 chipset and there’s an accompanying image, confirming the selfie camera is going to be in a centrally-placed punch hole. 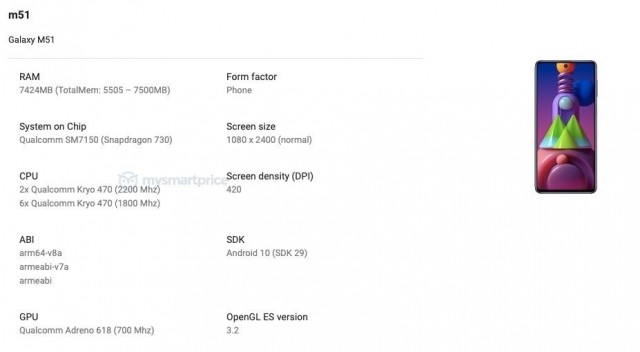 The Google Play Console listing of the Galaxy M51 also shows that the launch is fast approaching, as the development is entering its final stages.

The listing also confirmed the Samsung phone will have up to 8GB RAM and a Full HD+ screen, as well as Android 10 out of the box. We know the Galaxy M51’s launch is right around the corner because it has also appeared on Amazon India.

The landing page does not have any actual date for the unveiling nor the price is mentioned, but it should be updated in due time and we’ll let you know when there are more details.

is this model competent with 5G

U got any of theese, cause I'm really interested yet not sure

It's an amoled display