If you're coming from the Galaxy M51, you're in for a surprise when meeting the M52 5G. While the old model was quite a chonker at 9.5mm and weighed a significant 213g, the M52 is thin and light. Replacing the huge 7,000mAh battery with a more sensible but still sizeable 5,000mAh cell has to be responsible for that development, and the 2.1mm and 40g reduction in the two metrics is a lot, and is easily felt. 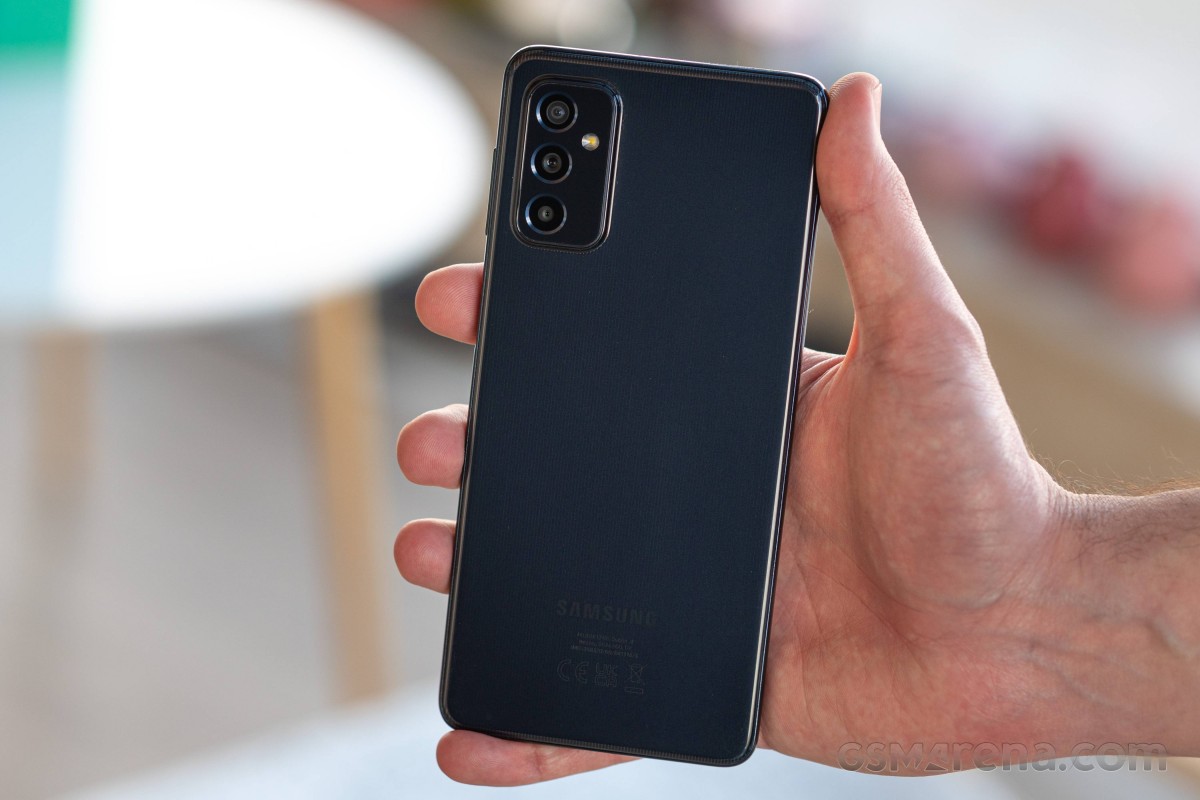 It's a stark transition from a model that was clearly designed with a battery-first mentality to one that is actually lighter on your pocket and easier on your pinky when holding it with one hand than a lot of potential competitors. Even Samsung's own Galaxy A52s 5G is 16g heavier and a mil thicker, all the while having a smaller display and lower battery capacity. 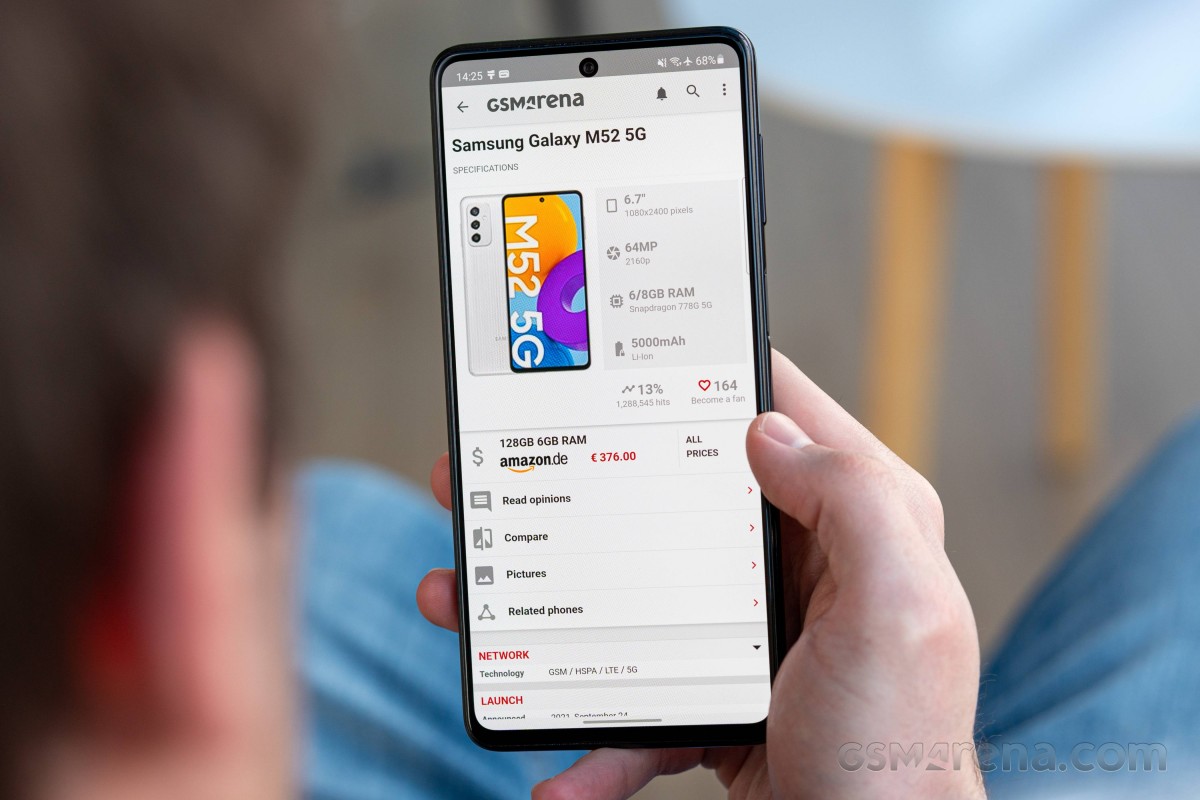 The M52 5G does fit in essentially the same footprint as its predecessor, and it's no wonder, given that it uses the same-sized 6.7-inch display. It's a new display, though, one that supports a 120Hz refresh rate - more on that on the next page.

With a punch-hole selfie camera and averagely proportioned bezels, the M52 5G has a fairly non-descript face. It's not ugly or anything, it's just not special or doesn't stand out in any way. 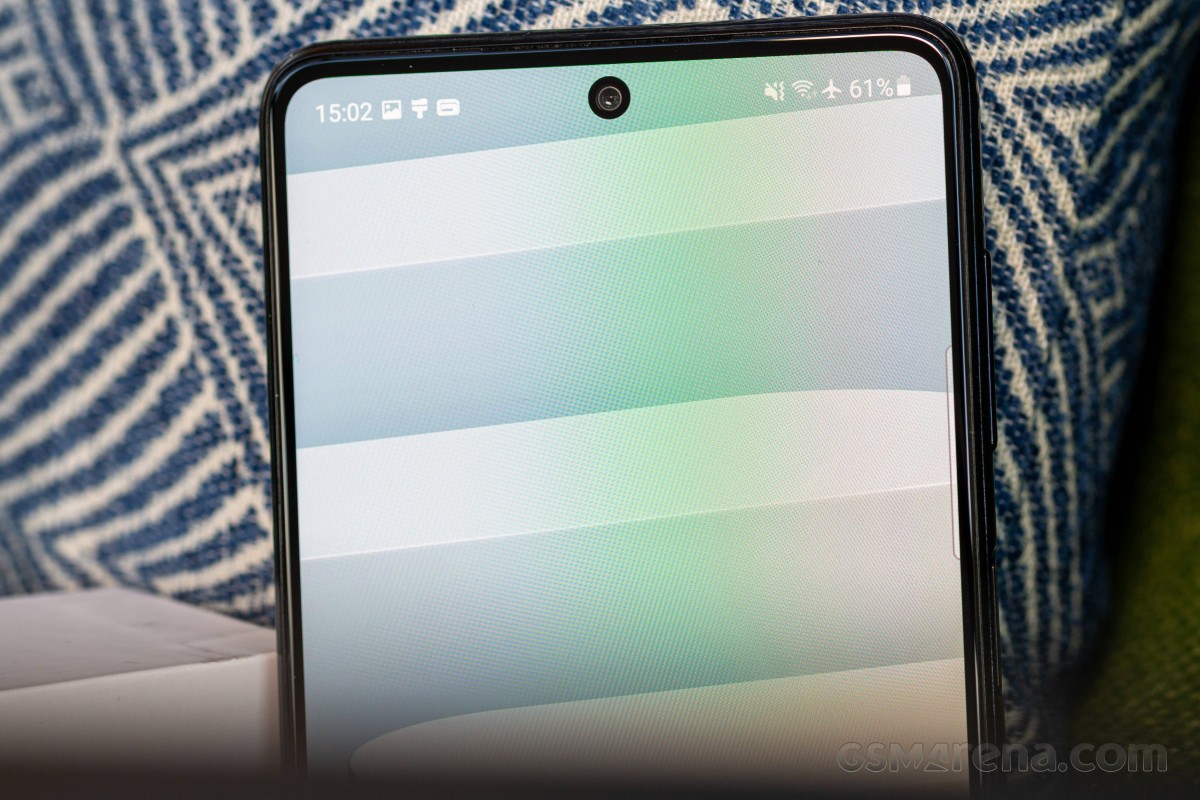 Similarly to that A52s 5G, the M52 5G does come with Gorilla Glass 5 protection on its display, an upgrade over the GG3+ on the M51. For an IP upgrade, you'd still need to get the A-series phone, however - the M52 5G isn't rated to be sealed against the elements. While the display side is glass, the rear panel of the phone is plastic - so was the M51's, and so are the ones on the A52 bunch. Unlike its A-series counterparts that get a very nice-and pleasant-feeling frosted finish, the one on the M52 5G is glossy and will happily accumulate fingerprints. Samsung tried to spice things up with a fine striped pattern, but it's almost as if we prefer the solid color of the M51 over this.

Having said that, we are reviewing the Blazing Black variant, and that may have something to do with our lack of enthusiasm for the phone's appearance. The Icy Blue or White options do look more exciting. 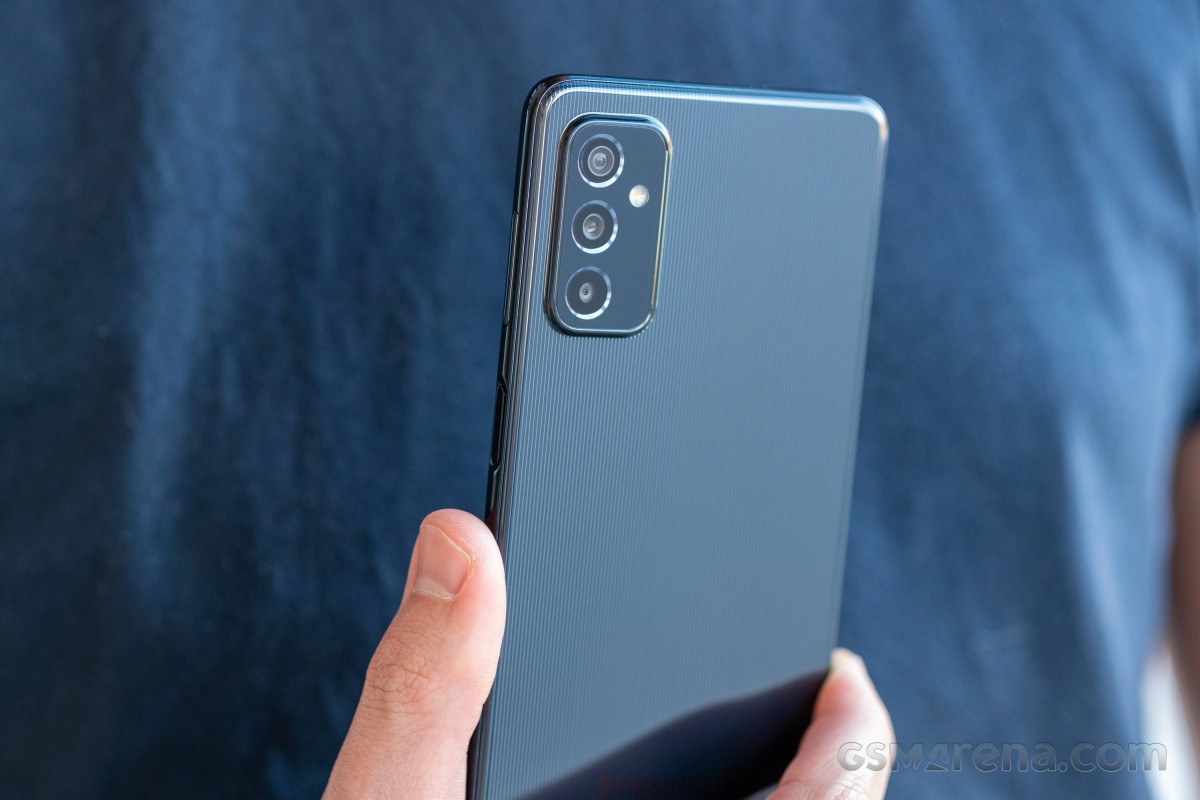 The camera island in the top left corner holds three cameras now, the depth sensor getting lost along the way from M51 to M52. It's a somewhat needlessly oversized assembly, with the three cameras stacked vertically and just the LED flash to the side. We can imagine some people are going to be bugged by its seemingly arbitrary position, but we're trying to be better than that ourselves.

Unlike the M51 and its nearly flush camera cluster, the one on the M52 5G does stick out a bit as a result of the much-reduced body thickness. 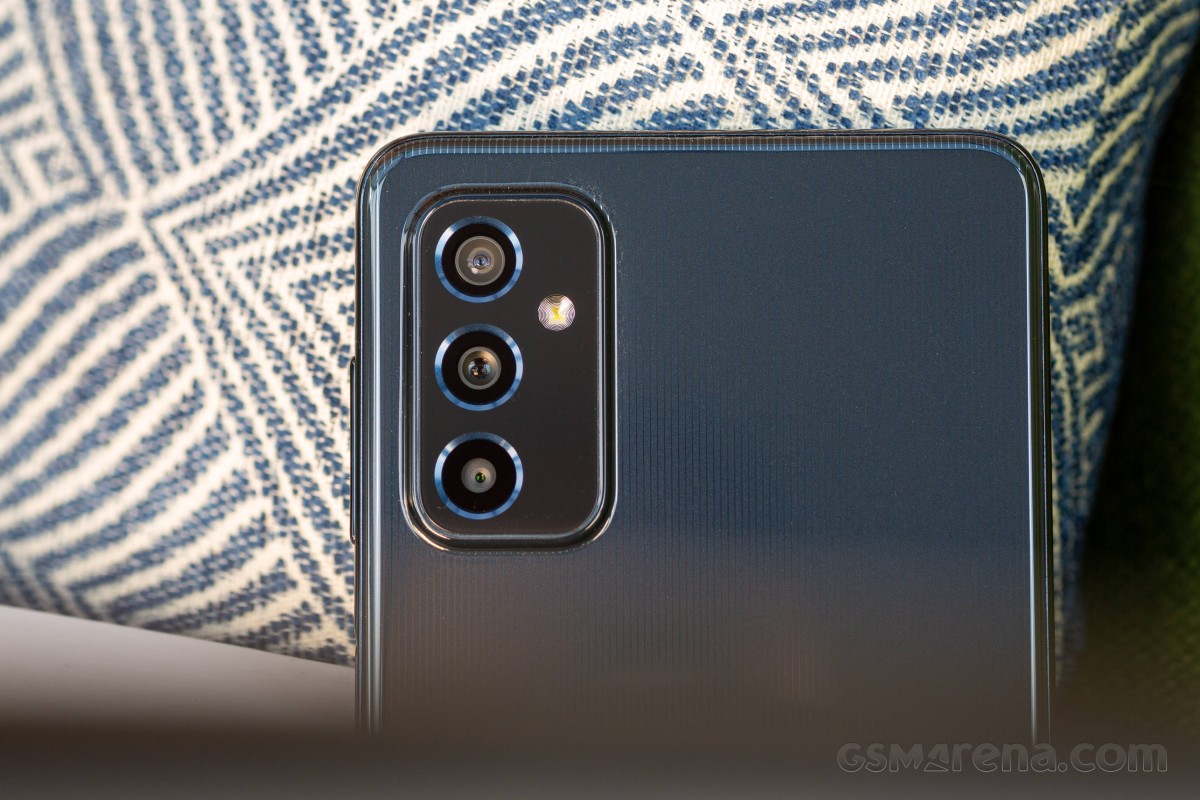 The exposed frame of the phone is also plastic, as was the case with the M51 and the A52 bunch. It doesn't feel particularly premium, but it should be durable enough in the long run.

The right side is home to the power button, which also houses the capacitive fingerprint reader. The positioning remains a bit too high, but perhaps thanks to the M52 5G's thinner profile, it's easier to reach with a left index finger than it was on the M51. No issues for the right thumb.

Reaching the volume rocker requires a further stretch, but it's not all that big of a deal. All buttons click reassuringly. 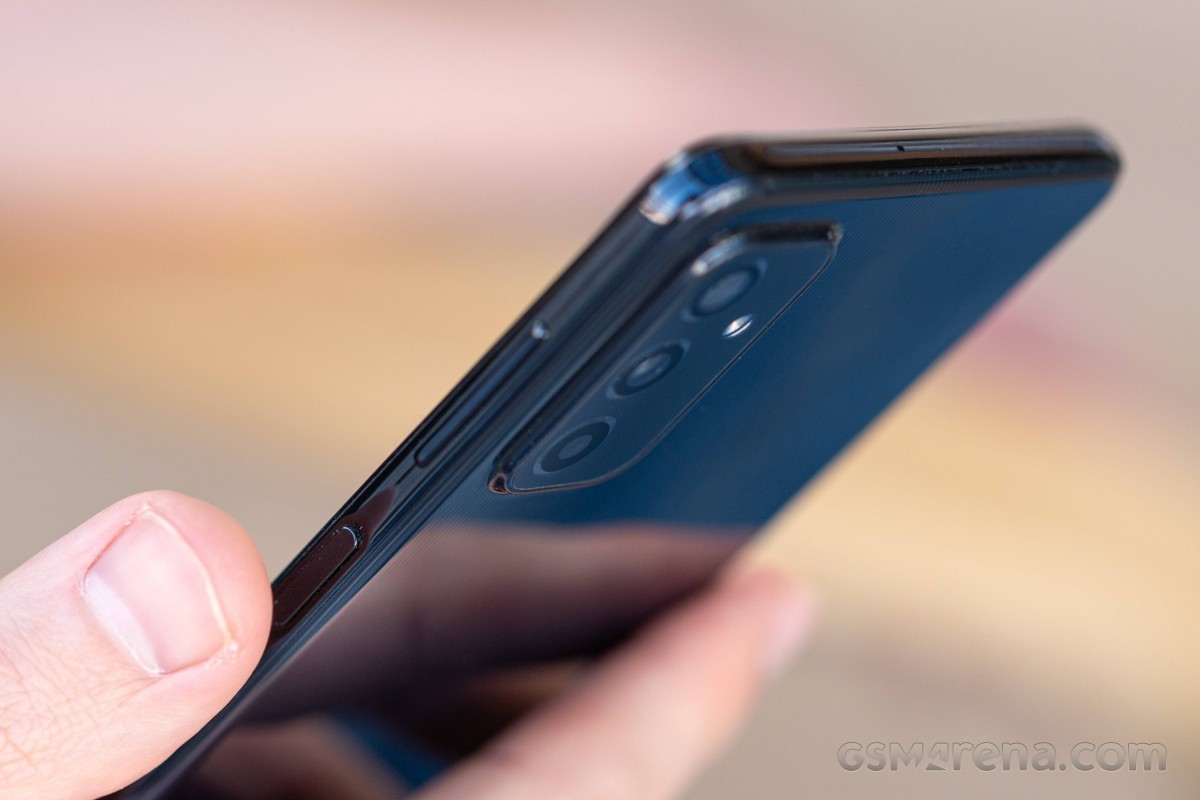 On the opposite side, high up, you'll find the card slot. A discerning observer will notice that the tray can't take two nano SIMs and a microSD all at the same time - you'll need to choose between your second SIM and your memory card, which is a less than exciting development coming from the M51 and its dedicated microSD slot.

There's another one of those too - a less than exciting development, that is. The Galaxy M52 5G has no headphone jack. The M51 did, the A52 trio all do.

Speaking of the A52 trio, they all have stereo speakers, but not the M52 5G - all it gets is the single bottom-firing unit beside the USB-C port on the bottom. There's a mic in here as well, plus another one up top.

Card slot on the left • USB-C port, loudspeaker and mic pinhole on the bottom • Secondary mic up top

Overall, the Galaxy M52 5G's design is hardly groundbreaking, and it seems unlikely to be a major deciding factor in getting this phone over any other. On the flip side, it's a well-built handset that's actually very light and reasonably compact for what it is, and that could be the right way to look at it. 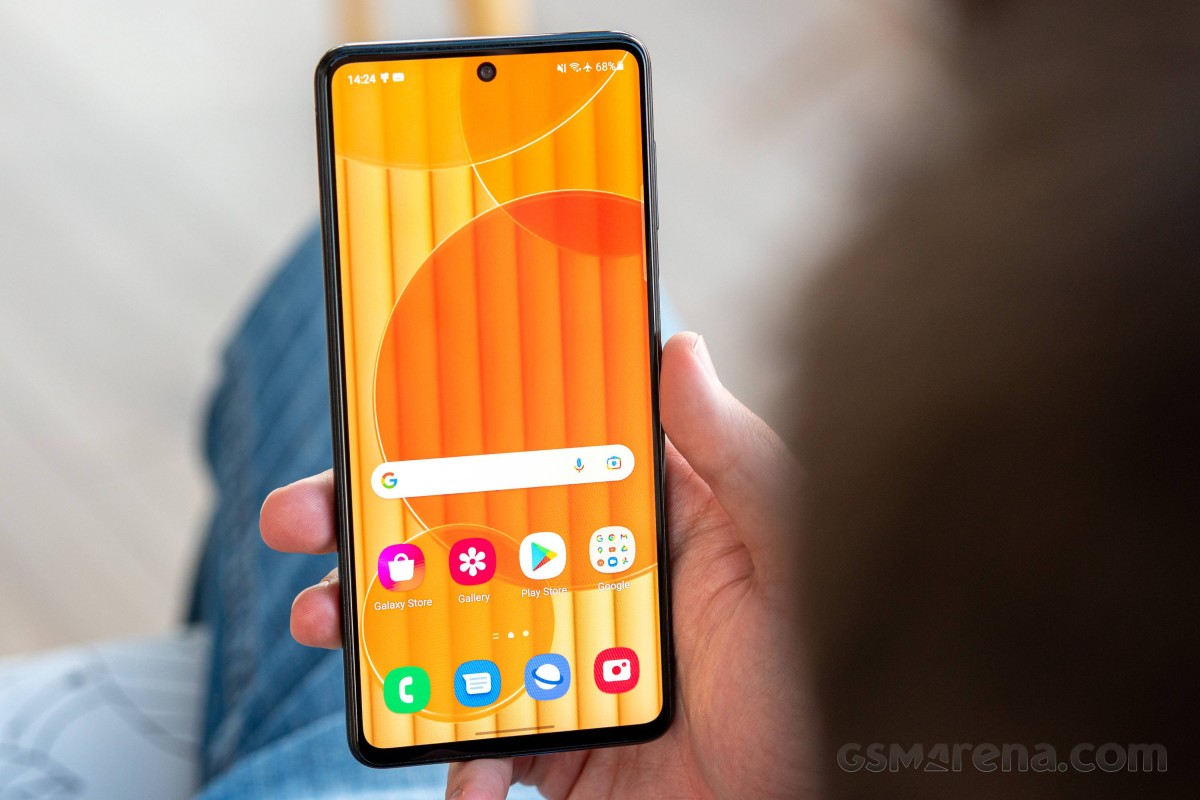 If you compare OneUI and MIUI on phones with same chipset, you will notice both have about same speed and smoothness. MIUI lags a bit on slower chipset, but so does OneUI i.e. A12. The only thing OneUI is better than MIUI nowadays is faster software ...

Most of them, movies are not in 16/9, but have cinema aspect witch is near 21/9. The definitions you're mentioning are for 16/9 format, so with top and bottom black bars you can just dismiss as useless lines. Not marketing, but brain. Of cou...

It is heavier and lagier meanwhile enjoys more bugs.