The Samsung Galaxy Note7 came in an ink-black box (nature-friendly soy ink, specifically) with glossy embossed letters. The carbon footprint is tracked by the Carbon Trust for extra nature points.

That aside, it's a well-stocked box, even without the launch-day freebies that Samsung is offering.

You get an Adaptive Fast charger (9V at 1.67A = 15W), a USB cable (full-size A to Type-C), two adapters (Type-C to full-size A and Type-C to microUSB 2.0), some spare S Pen tips and a tool to replace them yourself. As for the card ejector tool, it's hidden in the box that holds the manuals.

The eco-friendly box of the Note7 • Rich content inside

Samsung packaged the snazzy headset that it puts in recent flagship launches (EO-EG920BW). It's a premium headset with canal-type buds, 12mm drivers, tangle-resistant cables and a microphone with wind noise protection.

Sidenote: we mentioned freebies, and we're sure we've got your attention. Here's the deal - Samsung's official store and some retailers and carriers will offer a choice of several items when you pre-order the phone. In the US, the choice is between a Gear Fit2 smart band or a 256GB microSD card (some also offer a year of Netflix). In Europe, it seems early birds will get the new Gear VR headset bundled instead.

The Samsung Galaxy Note7 measures 153.5 x 73.9 x 7.9mm, that's taller and thicker than the Note5. And yet, its design makes it feel smaller. It's certainly noticeably more compact than an iPhone 6s Plus. And being as narrow as it definitely helps in everyday handling.

The phone is barely larger than the 5.5" Galaxy S7 edge (and we know this because we compared them side by side, otherwise you may not notice).

Famous sculptors will tell you that beauty lies in symmetry and Samsung heeded their advice. The Galaxy Note7 is symmetrical - its left and right sides are identically curved on the front and back. And in our humble opinion, it's one of the best-looking pieces of hardware Samsung has ever put out.

The Note7 shows beauty in symmetry

The screen curves aren't as pronounced as those on the S7 edge (yay!), they have a smaller radius. Some people were worried that the curves would interfere with the S Pen, but you naturally leave margins as you write, so Note7's curved screen edges aren't an issue.

These curves are still enough to make the phone feel narrower than the Note5, it even feels as pocketable as the S7 edge size-wise (it's not really that compact, though). The new Galaxy Note7 will win over many people who may have been on the fence about larger phones.

The curving sides help mask the bezels, which are now almost invisible, it's a striking appearance. Don't worry about accidental presses; the Note7 can detect where your palm touches the screen and will not react to it.

With this much glass, Samsung went with the new, tougher Gorilla Glass 5 to protect the exterior (the Note7 is the first phone to use it).

The glass covers both the front and back, the metal frame is sandwiched between both panes. On the sides, the frame is very thin, but it gets thicker around the top and bottom to accommodate ports, slots, and other hardware features.

The glass back and the thin metal sides surprisingly offer decent grip, but it's not the best. A case goes a long way here. 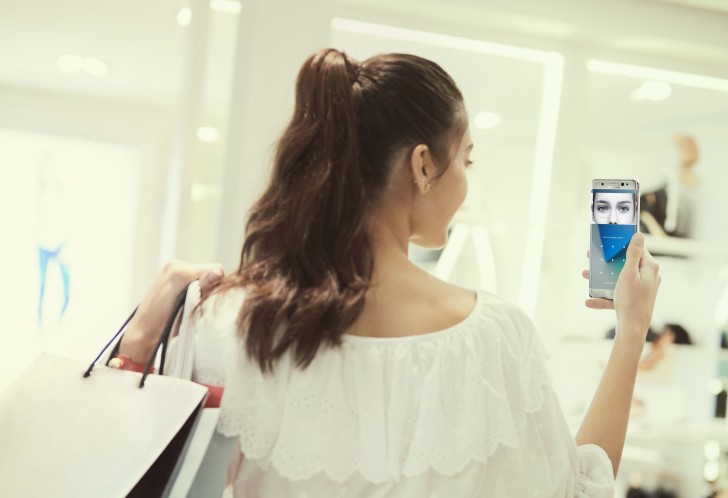 The front looks slightly differently, due to the addition of an iris scanner on the right of the earpiece, next to the regular selfie cam. It's essentially a second front camera, but it sees infrared light. To help it in the dark, there's an IR LED (left to the earpiece, you can see it light up in a dull red when it's active).

There's a decently-sized notification LED to the left of the infrared LED (it's not visible when it's off).

Below the screen is the other biometric sensor - the fingerprint reader on the Home key. To its side are capacitive keys (App switcher and Back), which are invisible when off and their backlight goes out quickly.

This shows Samsung likes the sleek look of having few buttons, but it refuses to move to on-screen buttons. We get the practicality of having the buttons fill the otherwise unoccupied lower bezel, but sometimes we wonder if it's time to take the plunge and move to virtual keys.

Anyway, three keys we prefer to stay physical are the Power button on the right and Volume keys on the left. They are on the thin side, but are easy enough to find by touch and they offer a solid click.

The top side of the Galaxy Note7 is rather baren - no IR blaster, sorry, there's only a microphone and the card slot. It's a hybrid slot that accepts two cards - nanoSIM and microSD, but on dual-SIM models you can drop the extra storage in favor of another phone line.

With 64GB as base (and so far only) storage option, we'd be okay with using two SIMs.

The bottom of the phone is quite busy. The new attraction is the USB Type-C - the reversible connector that wears many hats. This is a first for Samsung, we'll cover the port's functionality (and there's plenty of it) on the next page.

Also here is the trademark S Pen stylus. You have to push in with your finger so it 'clicks' (like a pen) and the top part sticks out, allowing you to pull it out. There's no chance it will ever fall out accidentally and you can't insert it backward like you could with the Note5 (which had the unfortunate side effect of damaging the slot's shaft mechanism).

The redesigned S Pen is more comfortable to use and tougher

Another first for the Galaxy Note line is the waterproofing. The Galaxy Note7 is IP68-certified, officially it can last for up to 30 minutes underwater.

The USB port is left uncovered, but don't worry - the phone will warn you if it detects moisture in the port and will refuse to charge until it's dry.

If you do need to charge near the pool, you should invest in the Backpack - a 3,100mAh power bank that uses wireless charging to top up the Note7 battery. It's water resistant, just like the phone itself! 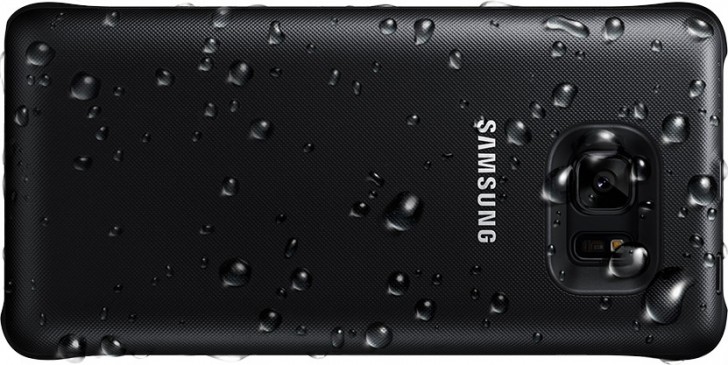 The back is not removable, so you can't access the battery. That's one feature from the Note 4 that we don't think is coming back.

The camera on the back is almost flush with the back and features Samsung's sports sensors - heart rate and blood oxygen. This is Galaxy S7's excellent camera, but the software has been retouched so we expect some improvement.

12MP Dual Pixel camera on the back, along with sports sensors

We're particularly fond of the new color scheme for the Note family - Coral Blue. Notes started off as business phones and they came in business-friendly colors (aside from the occasional Pink version for Valentines).

This new one is a dual-tone paint job. The metal parts and certain accents are gold (looks close to Samsung's Rose gold) and the expansive areas under the glass (front and back) are blue. It looks great in person and we hope Samsung will release more like this in the coming months (for those that don't care for the Blue/Gold combo).