Samsung's Infinity Display is still probably the most impressive smartphone panel for more than a few reasons. If you subscribe to the bigger-is-better way of thinking, then at 6.3-inches, the one in the Note 8 trumps its S8 siblings.

On the other hand, if the curvature along the screen edges is what tickles your fancy more, you might find the S8 and S8+ a bit more appealing. The Note8 is a lot more conservative in this respect. To be fair, now that the S8 pair has been around for a few months and the novelty is a bit worn out, the Note8 certainly comes across as less striking. Then again, for an end user, especially one upgrading from say, a two-year old device, the Infinity display design is breathtaking. 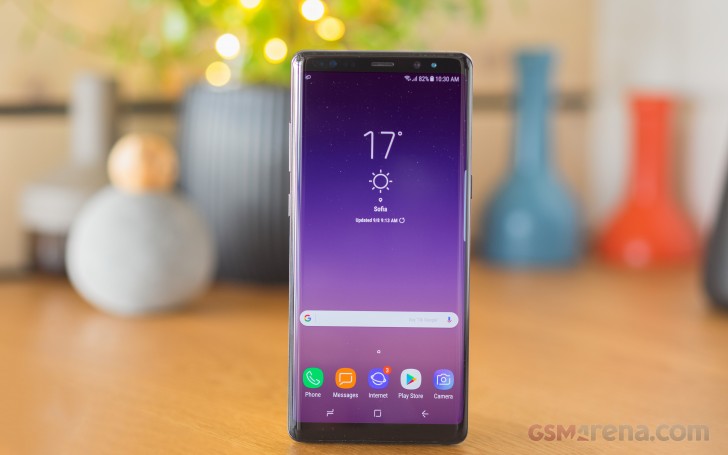 Curvature aside, the thing that takes longer to get used to is the ultra-wide (or tall) aspect ratio. One way to look at it is that 18.5:9 has a 15% larger height to width ratio than the traditional 16:9.

An increasing number of apps are starting to play nice with this new "stretched" aspect ratio. And it's particularly well suited to apps, which present their content in a scrolling feed (Twitter, Facebook, Instagram you name it) because you get a taller viewport.

Apps and games are one thing, Android can scale those easily. Media content, on the other hand, will take years to adapt to the new screen format if it adapts at all. So, prepare for a good deal of black bars around your videos or photos, or learn to live with some stretching or cropping.

It's not all bad - the new format is better for watching movies as they come in the even wider 21:9 format. Netflix is making a push in that direction as well. And even when watching older videos, living with letterboxing isn't all that bad as, at the end of the day, you are still getting more usable space.

High Dynamic range support is another major display trend this year. Chances are, the push to HDR will only get more intense. Just like the Galaxy S8 and S8+, the Note8 is at the bleeding edge of this content revolution. There are, however, certain certification and content issues still to be overcome. The Note8 supports the HDR10 standard, but not Dolby Vision. 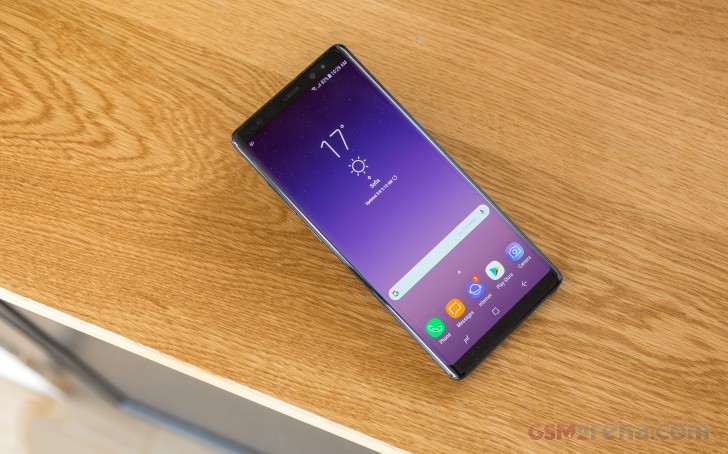 However, the HDR situation is currently a bit more complicated than that. Samsung's new Infinity Display panel holds the UHD Alliance's "Mobile HDR Premium" certification - it is the first smartphone display to get it. It got there through a combination of 112% coverage of DCI-P3 and 141% of the sRGB color spaces, impressive levels of brightness and contrast ratios. DisplayMate recently gave the panel its highest ever "A+" rating, so it should be perfectly well-prepared for HDR, regardless of formal certification.

In theory, Mobile HDR Premium means the Note8 has the same capabilities as recent high-end TVs branded with the Ultra HD Premium badge, and should allow you to enjoy the same HDR content. In real-world, practical terms, Netflix currently seems to hold the most promise as an HDR content provider. The platform is still adapting to the new-found HDR fad on mobiles though. Only recently, it decoupled HDR video from its 4K plan and added official support for three new mobile devices: LG V30, Sony Xperia XZ1 and the Galaxy Note8. Interestingly enough, the S8 and S8+ are still not on the list, so there obviously are kinks to iron out.

The future looks bright, but picking up a Note8 today probably means you won't be able to find much HDR content. However, the Note does feature a brand new Video Enhancer. It is meant to process non-HDR videos and simulate extended HDR-like dynamic range for photos and clips. However, we can't quantifiably test how well that works. 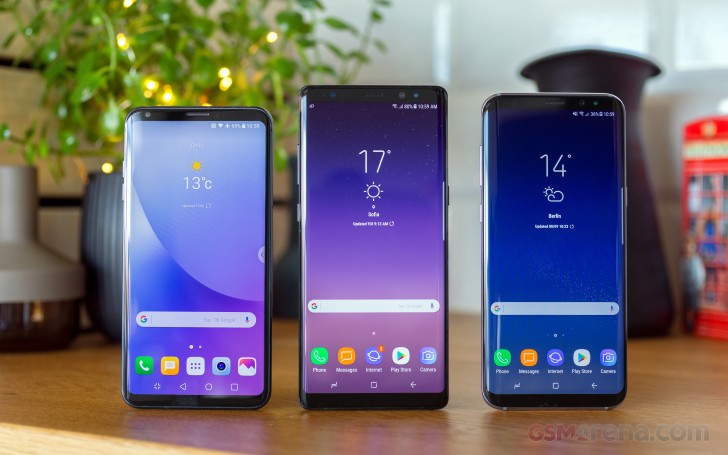 Since the S8, S8+ and Note8 all share a resolution of 2960 x 1440px, it is only natural that the 6.3-inch Note8 has a slightly lower pixel density, at 521ppi, than the other two at 529ppi and 570ppi, respectively. However, the difference is negligible, and the Note8 is tack sharp. It is also worth mentioning that Samsung runs the display at 2220 x 1080 pixels resolution out of the box. There is a setting which allows you to switch to its native 2960 x 1440 pixel resolution, or even go down to 1480 x 720. Things do look noticeably fuzzy on the latter.

On a sub-pixel level, Samsung employs a setup it calls Diamond Pixels. It has a few key characteristics: first, the Red, Green and Blue pixels are all different sizes. The Blue is the largest since it has the lowest light emitting capacity. Then comes Red and the noticeably smaller Green. Shape is also different. In order to maximize sub-pixel rendering, the first two are shaped like diamonds, while Green is oval and squished in between. The 45-degree symmetry of the arrangement should prevent aliasing and artifacts in drawing straight and diagonal lines on the Pentile display.

AMOLED panels have always been the go-to screens for saturated and "punchy" colors. The Note8's Infinity Display makes no exception. Besides the already mentioned wide native color gamut, you might remember, Samsung also mentioned high-saturation 'Deep Red' OLED when it first unveiled the display tech on the S8. This is a basically a fancy term to signify even punchier colors. Images are amazingly vibrant on the Note8.

That is especially the case if you leave the default Adaptive display mode on. In it, we measure an average deltaE of 5.2 and a maximum on 10.2 - pretty respectable scores but not really superior to the S8+. The more subtle curvature and size difference alone are indicative that the two devices do use different panels, so such variances were expected.

It is worth mentioning that our standard color tests all measure color accuracy compared to the sRGB color space. Just like the S8 duo, the Note8 has a total of four selectable screen modes, each with its own gamut specifics. If you really want to get technical about it, AMOLED Cinema is very accurate as per the DCI-P3 color gamut. AMOLED Photo is what lets you come as close to Adobe RGB as possible and Basic Screen mode aims towards sRGB or Rec. 709. The latter is usually what digital content and consumer digital cameras, TVs, laptops and other tech aim to cover.

So, Basic is the most accurate mode in case your content is meant to be viewed in sRGB. It netted an average deltaE of 3.1 and a maximum of 5.5. It doesn't necessarily look the best on the phone's screen, as it seems Samsung has applied a rather neutral gamma curve. The UI will look bland and not as contrasty when you switch to this mode.

We were happy to find that one novelty in the Note8 is an adjustable White Point. The controls could be a bit more granular, and the option is only available in Adaptive mode. However, having it allows for some manual calibration, if you have the right equipment. By putting brightness at exactly 53% (using a third-party app) and dialing in the channel sliders, as shown above, we were able to get the average deltaE down to just 2.5. This represents such a low deviation that we can consider the screen perfectly color-accurate.

However, the Adaptive display is the mode you probably want as your day-to-day setting. What it does is try to detect what kind of content is currently on-screen and adjust itself to that. It also makes good use of the entire extra-wide color gamut range of the panel to offset some of the washouts in a brighter ambient light. This is great for outdoor use.

Speaking of, the S8 pair pretty much blew us away and we expected a lot from the Note8 as well. Now, we did manage to get to a brightness as high as 850 nits in Auto mode by shining a light in to the ambient light sensor, but that is still a bit lower than the 870 nits of the S8+. In fact, at 100% brightness in Adaptive mode, without any input from the light sensor, the Note8 appears to run a bit dimmer than its S8 sibling as well. The difference is small, especially when you consider that the Note8 will happily go into overdrive when exposed to the sun outdoors, so we didn't really notice a real-life difference when using the phones normally. Still, we couldn't exactly confirm DisplayMate's recent claim of a record-shattering 1,200 nit reading on the Note8.

Since this is an AMOLED panel, contrast is practically infinite. The lowest available white luminance is also nice at 2.1 nits, so it's easy on your eyes if you operate the phone in complete darkness.

As for the difference you may spot between our published readings and the 850 nits we mentioned: OLED brightness is dependent on the percentage of the screen being lit up. We thus got the 850 nits score from a very small white rectangle. 647 nits is what you can realistically expect when using the entire screen. For the sake of fair comparison, we've stuck to the usual APL (average picture level) 80% which we've always used so far. This means that the white pattern, which we use to measure the max brightness of an AMOLED screen takes 80% of the display surface area.

Sunlight legibility is another area where the Note8 manages to score pretty close to the S8 and S8+, but still a few points short. Nevertheless, 4.148 is well impressive and won't fail you even in direct sunlight.

The point we are trying to get across is that while it's amazing, the Note8 display is not exactly better than the S8 duo. The differences are there and potentially important for certain professional users, but they don't necessarily benefit the regular user.

Note 10 lite is somehow Made from Note 9 Chipset and Note 8 Back Camera but with bonus Ultrawide, so yeah it depends on what do you need? You need flagship grade or somewhat flaghsip but it is on the midrange grade?