Samsung Galaxy Note9 stops by Geekbench with Android 8.1 on board

The Galaxy S9 and S9+ have been official for around a month now, so it's time for the upcoming Galaxy Note9 to start leaking much more than before. Today the device has been spotted in the Geekbench database.

Specifically it's the SM-N960U model, the one that will be sold in North America. It's rocking the Qualcomm Snapdragon 845 SoC unsurprisingly, just like the US-bound S9 duo. The Note9 also features 6GB of RAM, like its predecessor. 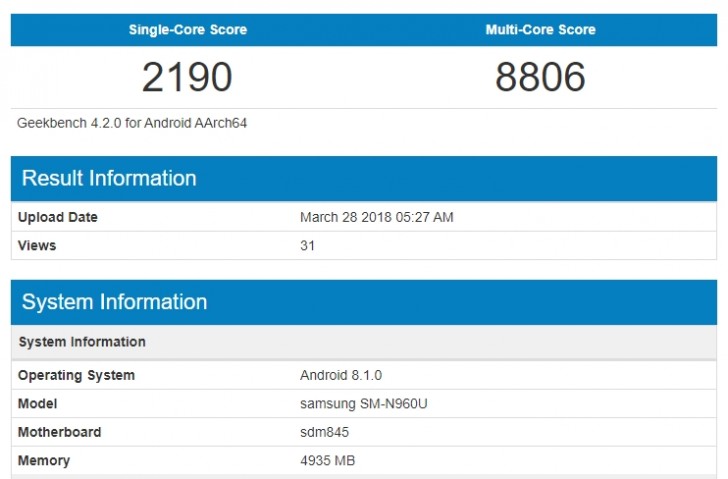 Interestingly, the prototype that ran Geekbench had Android 8.1 Oreo on board. That's of note because the S9 and S9+ launched with Android 8.0, and the updates that Samsung is currently rolling out to the Note8 and S8 are also based on that iteration of Google's operating system. So the Note9 may in fact be the first Samsung device to ship with Android 8.1. At least that's how the company played things last year, when the S8 duo launched on Android 7.0 while the Note8 got 7.1.1 from day one.

The Note9's Geekbench results, 2,190 single-core score and 8,806 multi-core, are about in line with what you can expect from a handset with the Snapdragon 845. The different Android version employed might have skewed those numbers somewhat, especially if it hasn't yet been properly optimized.

Same here, I will keep my Note8 unless we get at least two of the following: - Fingerprint sensor under the display. - 8GB RAM - Significantly larger battery. - Significantly faster charging. Yes I am fine with keeping Bixby as is, it seems...

"or optimise, tweak, whatever the device so the full 6GB RAM can be used instead." Dude, Do you know how hardware & software works? Those missing 1.1GB memory is reserved for the freaking operating system and some portion for the background...

Yeah, and I still don't care if or not.