Samsung Galaxy Note Edge review: The other side

Experiments are great but it takes manufacturing prowess to follow them all the way to the retail shelves. Samsung have it - no surprise there - and they pulled it off, bringing the Galaxy Note Edge to stores. Never mind that curved screen looks like a concept. The Galaxy Note 4, which was used as a base, will otherwise continue to offer the flagship experience, sans the experimental features. 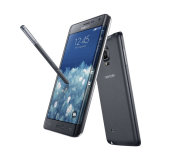 The Galaxy Note Edge features a 5.6" QHD+ screen - a little smaller than the Galaxy Note 4 screen up front, but with 160px worth of an added strip on the right side of the device. This "Edge screen" is subtly curved outwards but connected with the main screen - in fact, they are one piece in terms of hardware, though the software handles them separately for added functionality.

We'll discuss the software additions in detail, as for the basics you're basically looking at a Galaxy Note 4 with a Snapdragon 805 chipset - this includes everything from the S Pen stylus to the heart rate and SpO2 sensors.

Samsung's previous device with a bent screen, the Galaxy Round, was a high-end phablet in its own right but the added value of the arched screen was questionable. The Galaxy Note Edge seems to have more purpose and steps on the recognizable giant shoulders of the Galaxy Note 4, instead of building user awareness from scratch.

The Edge screen is used by the TouchWiz software to display at-a-glance info and offer various shortcuts. You can flip between multiple panels with a swipe and they offer a new multitasking experience on Android. The Edge screen boosts the user experience in compatible apps too: being on the side it can act as side-mounted buttons, like a shutter key for the camera or playback controls for the video player. This leaves the main screen fully dedicated to displaying content.

The Samsung Galaxy Note Edge seems like an odd device, but so did the Galaxy Note and, in retrospect, a lot of its features make sense. Will we look back at the Edge as "the one that started it all?" With multiple companies pursuing bendable displays, this may just be the first step to a flexible future. For now we'll stick to examining the Galaxy Note Edge in the present.

JUST do updates. All those issues are history...

I need Samsung not edge

I Purchased this phone and looks like was a great mistake, it hangs almost everyday and gets restarted. Battery is pathetic and cant even flash this as it wont start once Switched off. Took it to samsung store they kept it for a while and told me t...