The Samsung Galaxy S10, S10+, S10e and also the S10 5G are now receiving One UI 4.1 (based on Android 12). The three phones originally arrived in early 2019 with Android 9 and the original One UI. They are not alone either as Samsung’s other 2019 flagships are getting updated too. 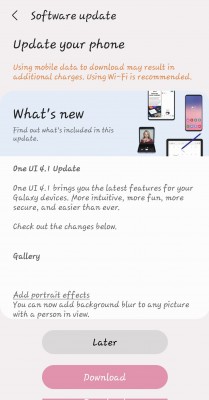 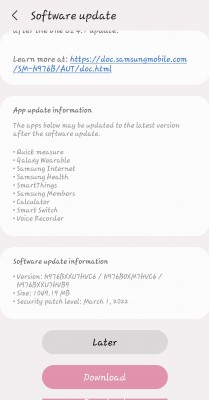 The update for the Notes is a fairly hefty 1,049 MB and brings changes to multiple Samsung apps. It has a firmware version of N976BXXU7HVC6 and includes the March 1 security patch. The S10 updates also bring the March patch.

Note that we haven't seen any mention of the Samsung Galaxy S10 Lite nor the Galaxy Note10 Lite when it comes to the 4.1 update. As for newer models, the Galaxy Note20 models started receiving One UI 4.1 last week.

guys dont update ur galaxy to UI 4.1 . my galaxy 10 after updating it from 4.0 to 4.1 is now overheating without any reason and battery drains faster the whole phone is lagging pls don't update im trying to figure out a way to fix it . i might g...

Really we need it in Africa for the s10 plus