As you'd expect from a glass sandwich smartphone, the Galaxy S10e isn't the grippiest one around. It's still quite slippery and the glass is a fingerprint magnet. On the other hand, due to the small footprint of the handset, it's way easier to handle even with one hand. And the rounded edges on the back help with that too.

Moving to the front, we feel like we are missing something here - the curve. Unlike all Samsung flagship phones for the past couple of years, the S10e is the first one to go for the flat front panel design. And this could be a plus depending on how you look at it. The curve does help with reducing the footprint and maybe the grip to some extent but the repairs are more expensive and if you are looking for extra protection, the curved display makes things more complicated. It depends on your stance regarding curved displays. 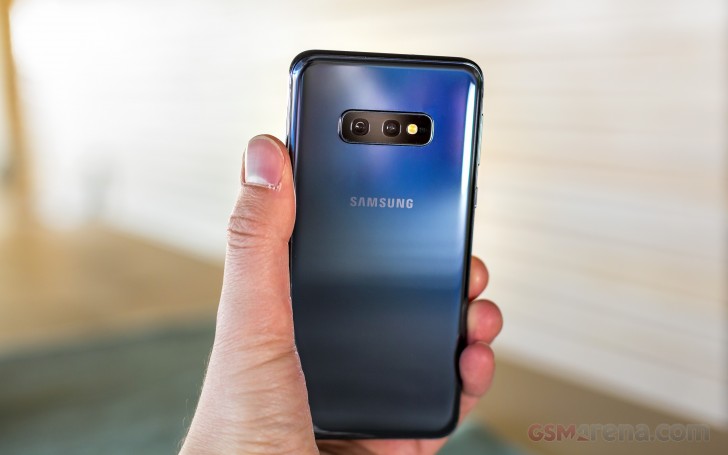 Bezels are pretty minimalist as well, so you can enjoy the 5.8-inch display in a pretty compact package. In fact, the upper bezel is so small that it barely fits the earpiece that doubles as a secondary loudspeaker. That's why the proximity and ambient sensors are placed under the screen. The chin is the only thing that stands out and it's still a lot thinner than most we've seen. And now let's address the elephant in the room - the punch-hole selfie cam. Once you get used to it and apply a funny wallpaper that masks it, you will get used to it fast. 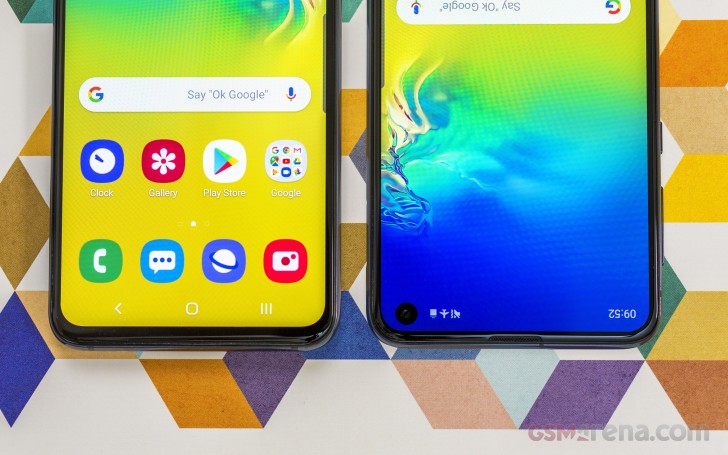 Mathematically speaking, the punch-hole camera makes more sense than a notch but it's a really minimal upgrade, to be honest. The UI usually cuts out the upper part of the screen rendering it unusable. Also, we don't know why Samsung decided to place the hole on the right as it pushes the status bar icons more to the middle of the screen. And one would make a case that there's no relevant content in the lower-left corner of the screen than on the upper-left when playing games or watching videos. It's less distracting on the left. In any case, we feel like this shouldn't be a deal-breaker if you like everything else about the phone. 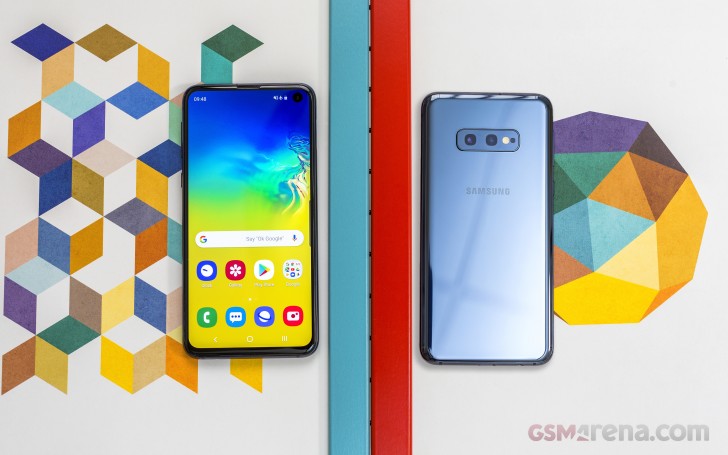 This leaves us with the side frame of the handset. As we've already mentioned, it's made of aluminum with a glossy finish. On the bottom, you will find the USB-C connector along with the loudspeaker grille, the main microphone and the 3.5mm audio jack. Going to the left, we find the dedicated Bixby button and the volume rocker. Both buttons feel quite firm, there's minimal wobble and provide tactile and clicky feedback. The top side houses the secondary noise-canceling microphone and the SIM card tray that also holds the microSD card slot. 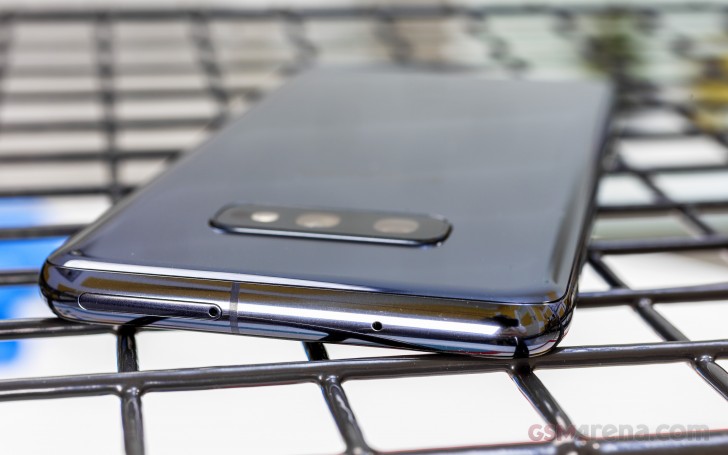 And finally the right frame. This is where Samsung really messed up. The power button that also doubles as a fingerprint reader is placed so up high near the corner of the S10e that makes it really hard to reach. To be honest, we were impressed by the awkward and uncomfortable placement of the button since we are dealing with such a small device here. 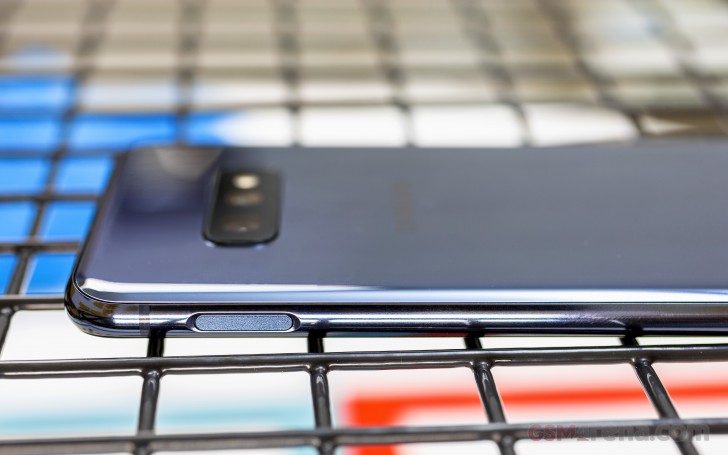 Also, due to the small surface of the fingerprint scanner, it's really important to train it properly and scan all the edges of your fingertip to ensure accurate and fast reading. Otherwise, we don't have any major complaints about the functionality of the reader. It's accurate and responsive. 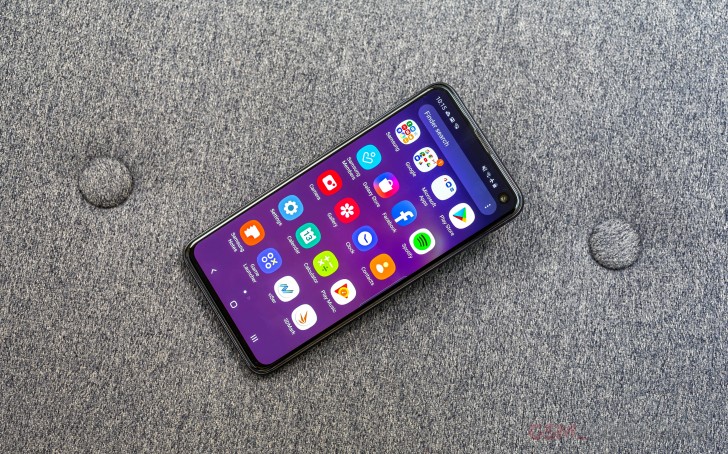 Although there were no surprises with the design - except for the utterly awkward fingerprint reader placement - the Galaxy S10e carries high-end materials and offers impeccable build quality on par with the rest of the expensive flagships out there. 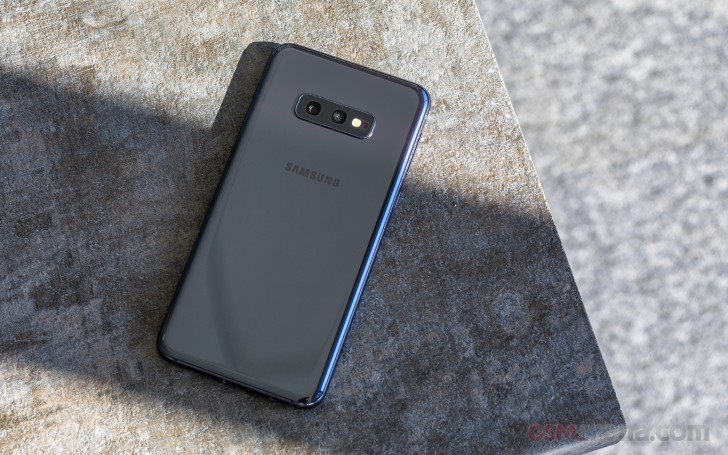 Here's a 360-degree view of the handset if you want to take a closer look.

I thought of buying Samsung S10 e. let me know the working capacity of the battery (charging to be done frequently) and quality of the camera

Hi, Yes it lasts a day. I've had one for the last 2 years and it's great. It does depend what you plan to do - if you want to walk all day following Google Maps (so constantly using GPS and mobile data) you might struggle, but I've u...

Does it last at least a day?