The Galaxy S20 FE has a distinctly Samsung looks, thanks to the central punch hole in the display and the camera arrangement on the back. Despite the obvious brand affiliation, the Fan Edition doesn't quite accomplish an S-series impression - it gives off more of an 'A' vibe. 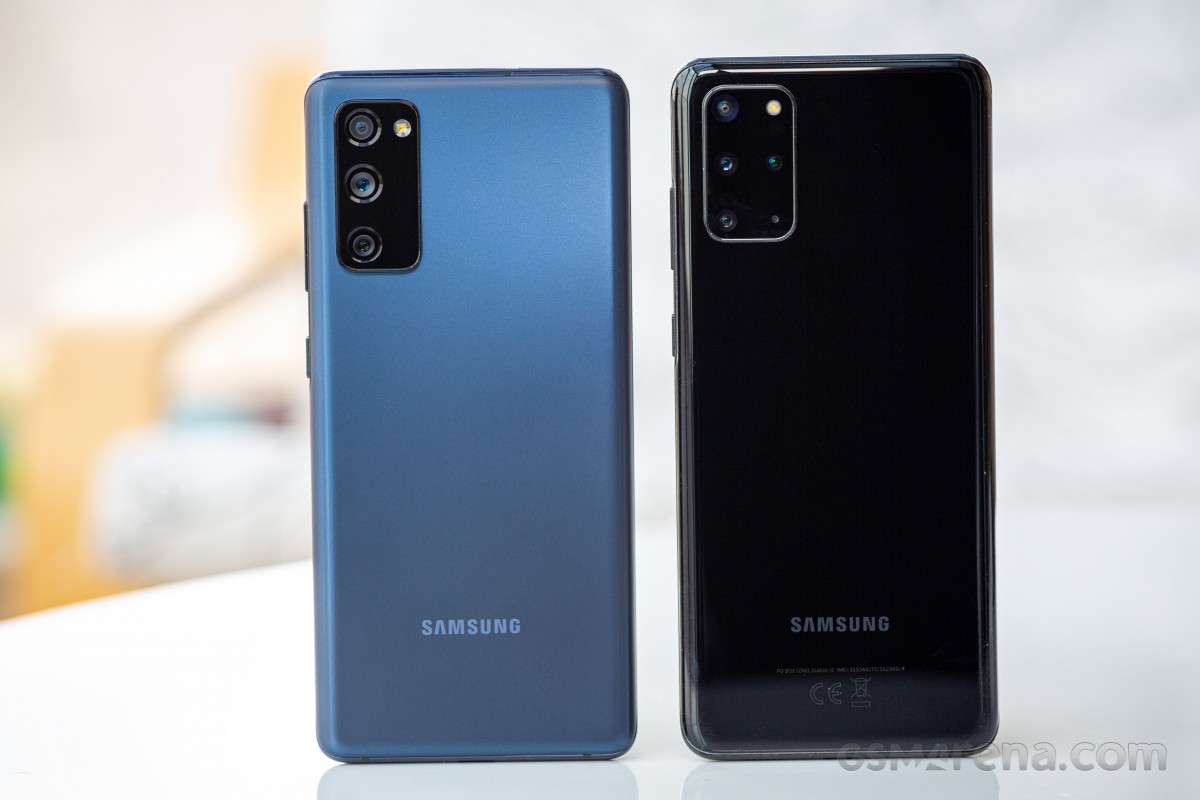 For example, the Fan Edition has thicker bezels all around, and we all know nothing says 'premium' quite as loud as minimal bezels. It's not like the black frame around the display is overly thick. It's just that it's not as 'flagship-grade' as on the other S20s. 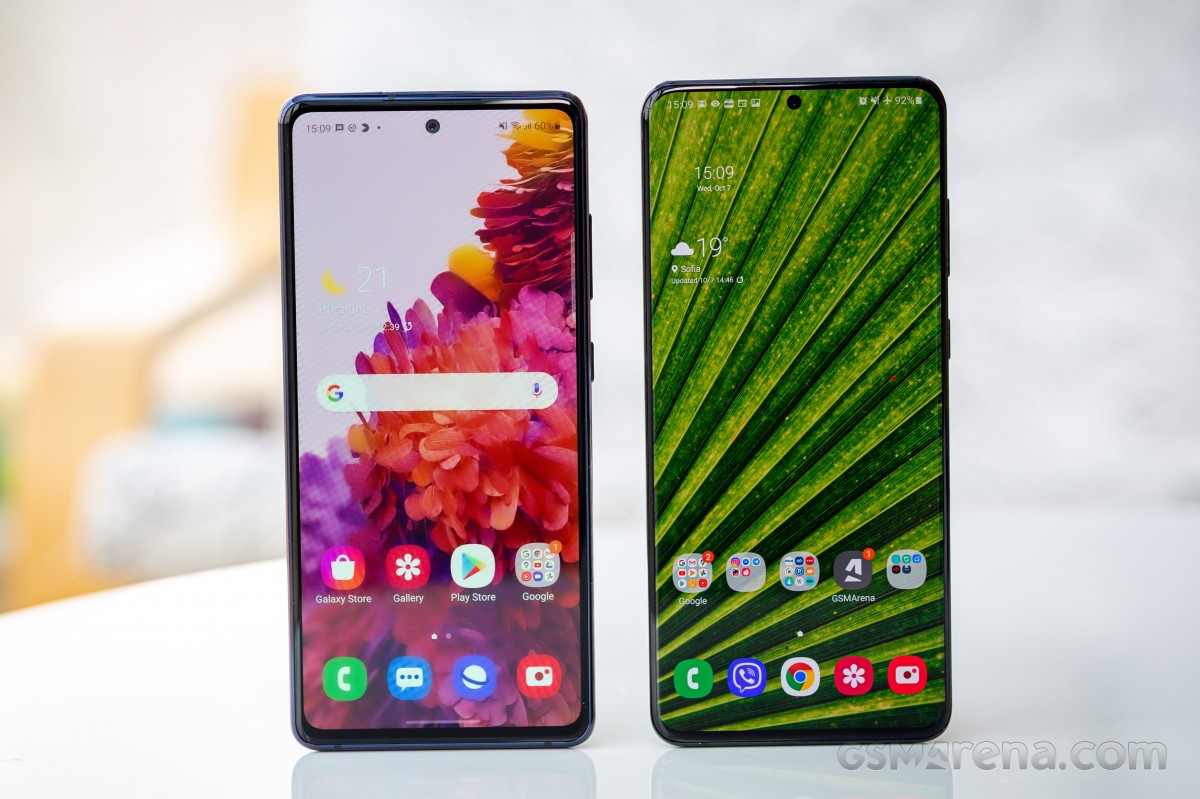 Another mark of a high-end phone, particularly in Samsung's world, is a curved screen. While they have been reducing the effect on recent models, the S20 phones still have a millimeter of a sloped edge on the sides. Well, the FE is entirely flat. 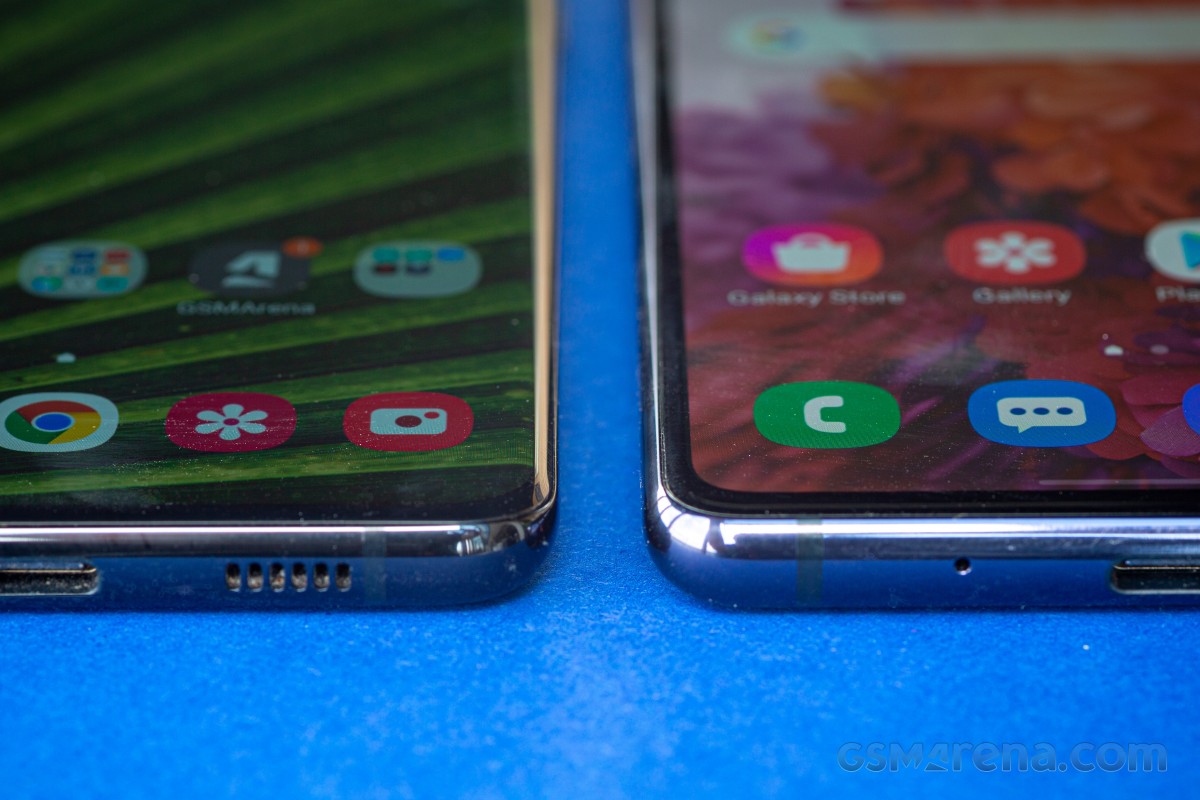 The punch hole is tiny, we'll give the FE that - it's tinier than what the Note20 has, for what that's worth. Then again, it's also tiny on the Galaxy A51 5G, for example. 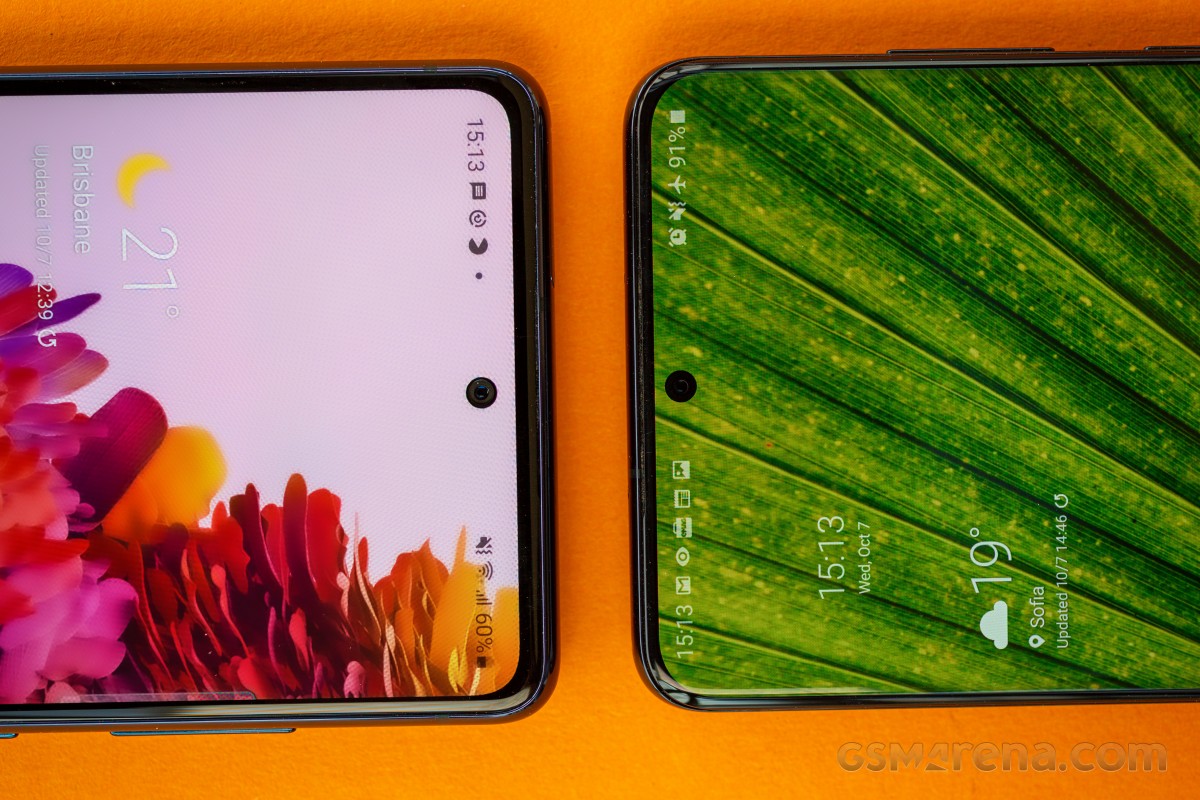 Perhaps the one most notable difference in the build quality of the Fan Edition compared to the other S20s is the material used for the back. Where the S20 and S20+ used glass, the S20 FE's rear panel is plastic. It's got a satin finish, and it's about as slippery as they come. While it rarely looks pristine, it's certainly miles better than a glossy glass panel when it comes to accumulating fingerprints. 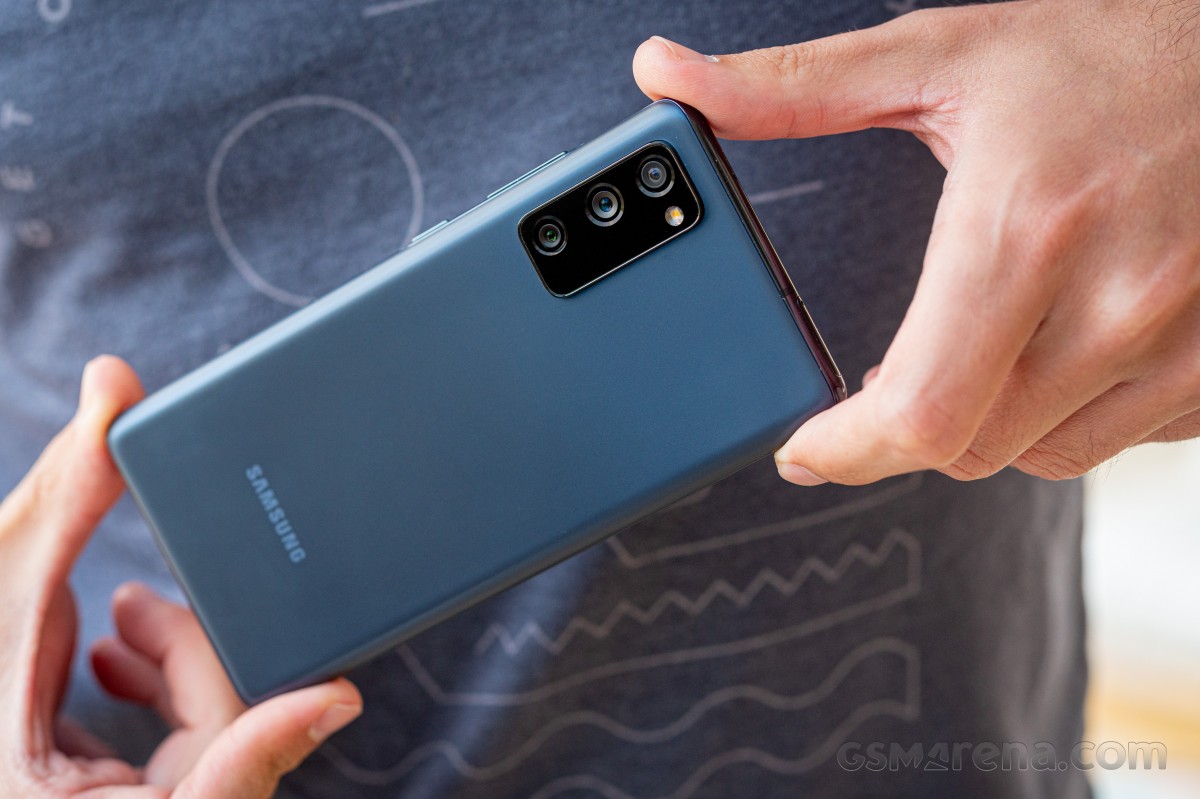 Despite the change in material, the Galaxy S20 FE is still IP68 - like the big boys. Not that we expected the rear panel to be any more water permeable than a glass one, it's just that dust and water protection is hard to find at this price point.

The S20 FE is available in six colors - Navy, Lavender, Mint, Red, Orange, and White, all of them with a Cloud prefix. Our review unit is the blandest of the bunch, the Cloud Navy one. 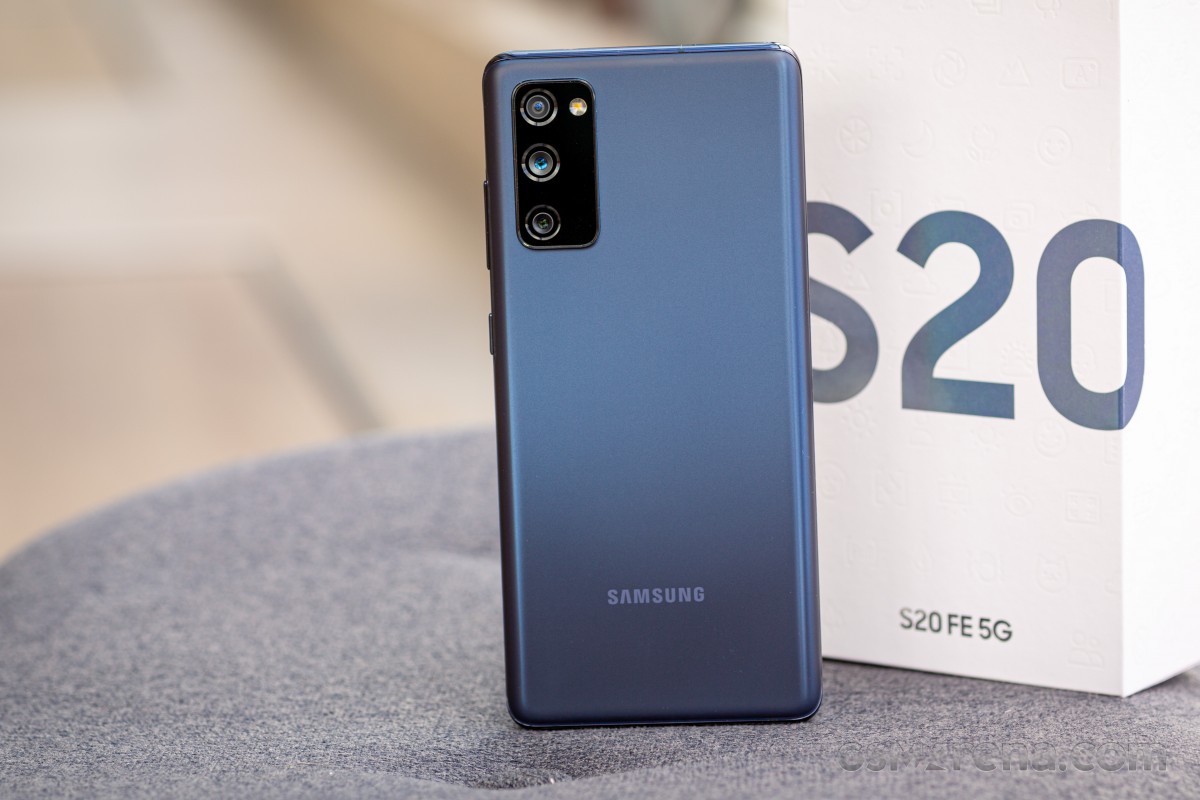 Over on the front, the AMOLED display is covered with an unspecified glass - it's likely not the sixth generation Gorilla Glass that you can find on the S20 and S20+, and it's most definitely not the Victus that the Note20 Ultra gets either.

What's not changed is the frame material - it's aluminum on the FE as it is on the other S20s. The bits along the frame are arranged identically too. The power button and the volume rocker are on the right in a slightly enlarged portion of the otherwise slender aluminum outline, while nothing is spoiling the minimalist left side. The bottom is home to the USB-C port, the main loudspeaker, and the primary mic.

Up top is the secondary mic and the card slot. In the back-to-back tray of our dual SIM unit, you can insert one nano-SIM and microSD, or two nano-SIM, but you can't do all three at the same time - same as on the S20 bunch.

The Galaxy S20 FE measures 159.8x74.5x8.4mm, which is 2mm shorter than the S20+, but 0.8mm wider and 0.6mm thicker. While the height difference is hardly noticeable, the extra thickness, marginal increase in width, and the flat front all combine to create a boxier in-hand feel when comparing against the S20+ - and the S20+ does have a bigger display, at that. 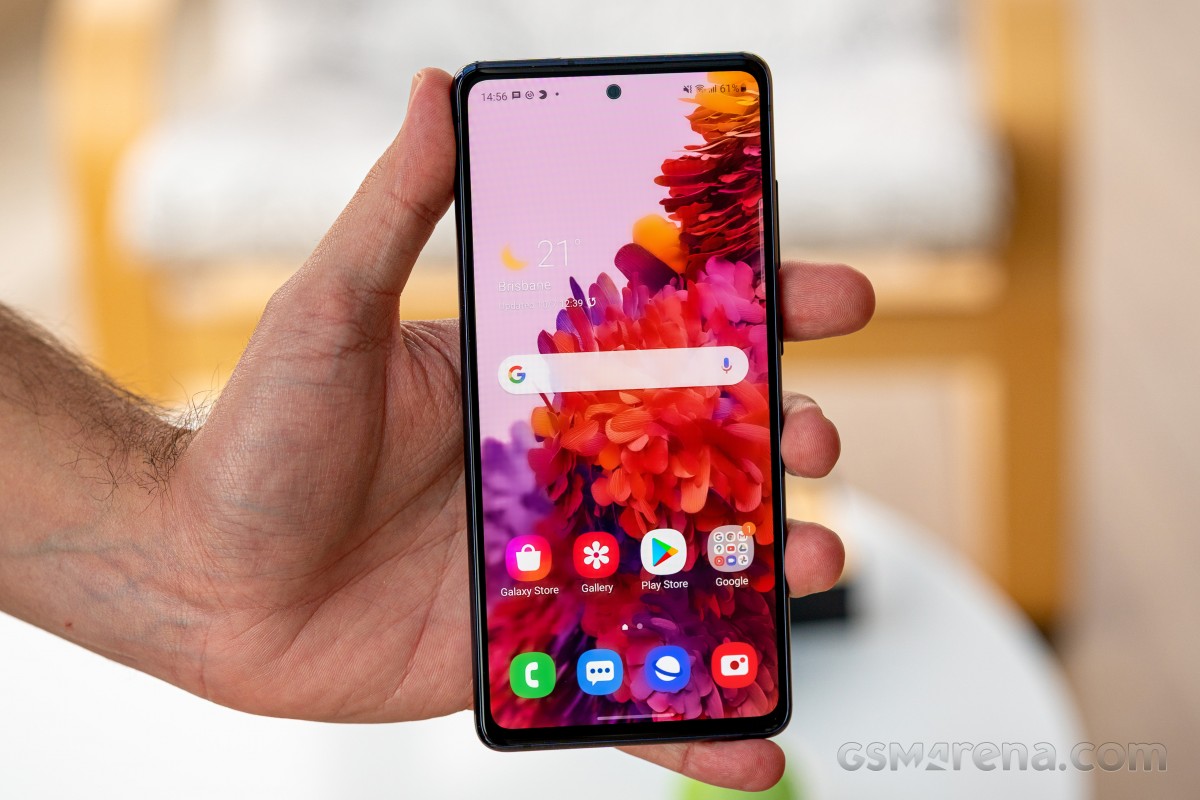 I am not very sure of the gsmarena S20 FE battery test results. My screen on time is around 4.5 hrs after all possible optimizations.

FE 5G model has the Snapdragon. Go for it. The camera is 12 MP but is excellent. Flagship grade. The only thing the A71 will definitely offer is better battery. But the Snapdragon should be reasonably good in the FE too in this regard.