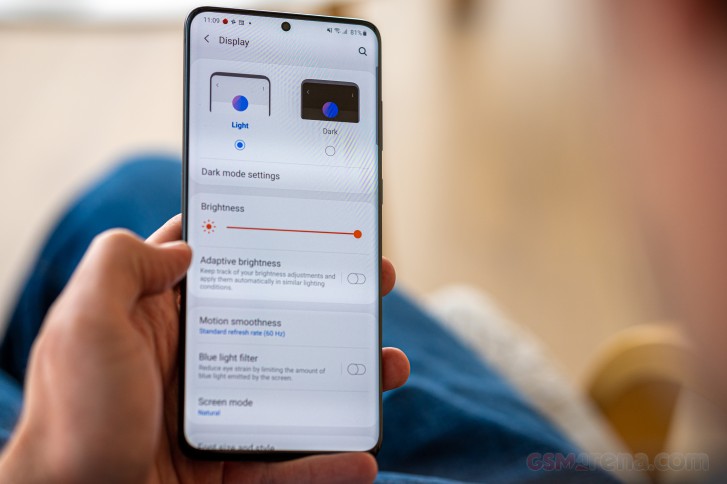 The results for brightness we got out of the Galaxy S20+ are mostly in line with the numbers posted by its stablemates, if slightly lower. When adjusting the slider manually, we measured a maximum of 379nits, compared to nearly 400nits on the other two. The 797nits in Adaptive mode with the display under direct light are marginally lower than on the S20 and a full 100nits lower than the Ultra.

Having said that, the S20+ has one bright display - it pumps out 200nits more than the OnePlus 7T Pro and 100nits more than the Huawei Mate 30 Pro, with a Pixel 4 XL far behind. Even so, the iPhone 11 Pro Max manages two dozen nits more, while the Find X2 Pro with its 871nits in our test is closer to the Ultra.

The S20+ adopts the two-mode color reproduction scheme Samsung's been using lately. In Natural mode, we measured an average DeltaE of 1.7 with a 3.1 maximum for our set of sRGB test swatches - excellent accuracy. The Vivid mode offers a wide gamut and can reproduce the DCI-P3 color space with relative accuracy - an average DeltaE of 3.4 for the P3 test swatches, though the whites are a bit bluish (DeltaE of 4). You can fix this by bumping the Cool-to-Warm slider a notch to the right, and you'll get near perfect whites (DeltaE of 1) and slightly better overall accuracy (average DeltaE of 2.8).

The numbers aside, Vivid mode delivers the familiar AMOLED punch we know and love, while Natural looks a bit lifeless in comparison (though perfectly okay in isolation). Vivid is the mode out of the box.

The color modes have a few implications on maximum brightness. While it is almost identical in Adaptive mode (797nits in Vivid, 792 in Natural), the Natural mode's maximum in manual operation is 340nits as opposed to the 379 in Vivid - a more noticeable difference. We checked ,and the refresh rate and display resolution setting had no effect of color rendition or maximum brightness. 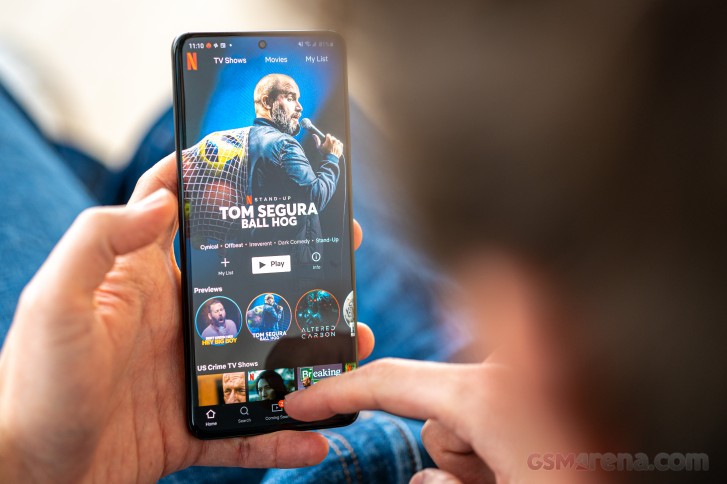 As expected given the 'Dynamic' in the panel's branding, the display on the Galaxy S20+ supports HDR10+, the royalty-free dynamic metadata HDR format that Samsung pushes next to DolbyVision. At the time of writing, both Netflix, Amazon Prime Video and YouTube will happily serve you HDR content.

The Galaxy S20+ is powered by a 4,500mAh battery, midway between the S20's 4,000mAh powerpack and the Ultra's 5,000mAh unit. While the S20+ unit we have for review is the 4G-only version, its modem is still external to the chipset as it is on the 5G variant, and the increased battery consumption from this, coupled the high refresh rate display means that 2020 Samsung flagships won't top up any battery life charts.

As we did on the S20 and S20 Ultra, we tested the S20+ in the two modes that we feel make the most sense. Number one is with the display set at 120Hz (and consequently resolution at 1080p), while the other option is at maximum 1440p resolution and 60Hz. We observed similar performance on the S20+ as we did on the Ultra, with the vanilla S20 deviating in some ways, which we'll investigate when we get the chance. 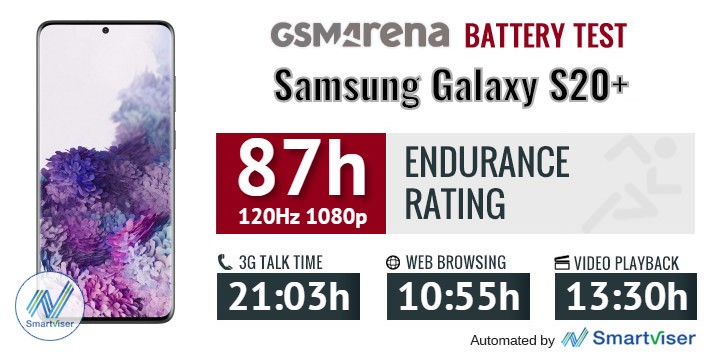 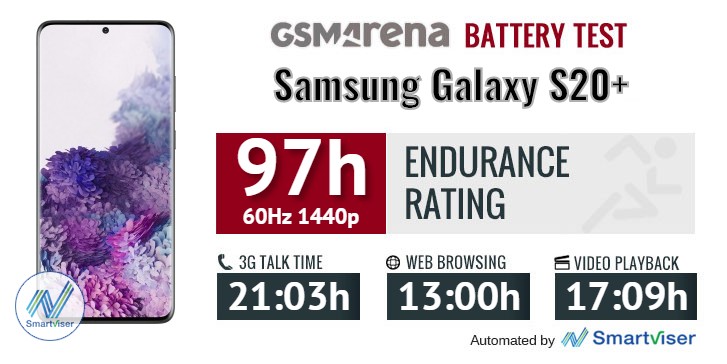 Our battery tests were automated thanks to SmartViser, using its viSer App. The endurance rating above denotes how long a single battery charge will last you if you use the Samsung Galaxy S20+ for an hour each of telephony, web browsing, and video playback daily. We've established this usage pattern so that our battery results are comparable across devices in the most common day-to-day tasks. The battery testing procedure is described in detail in case you're interested in the nitty-gritty. You can check out our complete battery test table, where you can see how all of the smartphones we've tested will compare under your own typical use.

Charging the S20+ with the bundled 25W adapter (Power Delivery with PPS) takes 57 minutes from flat to full and 30 minutes into the process you'd be looking at 62%. Only the Ultra supports Samsung's 45-watt charging, which doesn't make all that big of a difference in real-life charging speed, so the lack of such support on the S20+ isn't really an issue.

More importantly, the S20+ supports wireless charging, up to 15W with compatible chargers. It will also charge other devices itself - Samsung calls the feature Wireless PowerShare, and it works at up to 9 watts. An ideal use case would be for traveling light with just the phone's charger and using the handset to power things like wireless earbuds or a smartwatch.

The Galaxy S20+ has a stereo speaker setup with the earpiece serving as the second channel. It defaults to the left channel when the phone is in portrait orientation, with the primary speaker on the bottom taking over the right, but when in landscape, the two will switch accordingly.

Oddly enough, the S20+ wasn't quite as loud as the smaller S20 in our testing, but it still earned a 'Very Good' rating, as the other two phones in the family. On the other hand, the Plus's frequency response was closer to the Ultra, go figure. In any case, the Galaxy S20+ sounds excellent and well worthy of its flagship position.

The phone has been good so far, just that if I missed any call I will not see the notification at the top of the phone icon

Great phone until now. Fast 5g support a big high quality display, good 64mp camera, and a durable exterior. Why is everyone so angry about this phone?