Unconfirmed reports claim that the Exynos 1000 will be faster than the Snapdragon 875, but we can’t just assume that this will be the chipset used in the next Galaxy S flagships. Those early reports were based on Geekbench results that were pulled from the database before we could confirm they are legitimate. 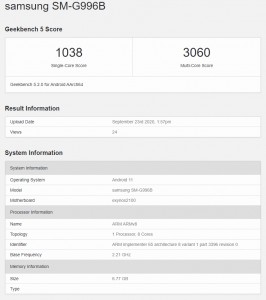 Well, now there is a Geekbench result from what should be the Samsung Galaxy S21+ and the scores are tangibly lower. Notice that the score page for the SM-G996B (likely the euro version of the S21+) lists the chipset as “Exynos 2100”, which appears to be an entirely different chip.

Here’s how it compares against the rumored scores of the Exynos 1000 and Snapdragon 875.

The phone should have 8 GB of RAM as the 6.77 GB figure likely omits the memory reserved for the GPU. This matches the RAM capacity of the current Galaxy S20+ with 4G connectivity (the 5G models have 12 GB).

The 2.21 GHz clock speed should be for the small CPU cluster – for some reason Geekbench always reports the small cluster. For comparison, the four A55 cores in the Exynos 990 run at 2.0 GHz, so we can expect a small overclock for all cores. What those cores may be is unclear (the Exynos 1000 is said to feature the new Cortex-X1 core).

That's for the 2022 release going forwards, theyr still not ready but when they are. I might consider a Samsung for once becouse of my support for amd being an amazing company

Becouse when have you ever seen them do that? Mostly China only phones have it, it's hard to get. Besides that is a 2020 chip ffs, technology is gonna evolve and need more, we don't wanna stay in the same barriers of charging, cameras, perf...