The S21 Ultra is Ultra not just in name and features, but also in size and (especially) weight. Its design is less in-your-face than its predecessor's, but it's still not ashamed of what it is - namely a huge slab of glass and metal, with a gargantuan camera island. One so big, in fact, that it's reaching all the way into the frame now.

Compared to the S20 Ultra, the design has been refined a lot, and while in this reviewer's opinion the S and Note flagship series are still clearly designed by two different teams (and our subjective assessment seems to always favor the Note team in this regard), this time around it does seem like the people designing the S21 Ultra were at least aware of the most recent work done by the competing team. The arrangement of the cameras in their island does somewhat remind us of the Note20 Ultra, but that's about it. 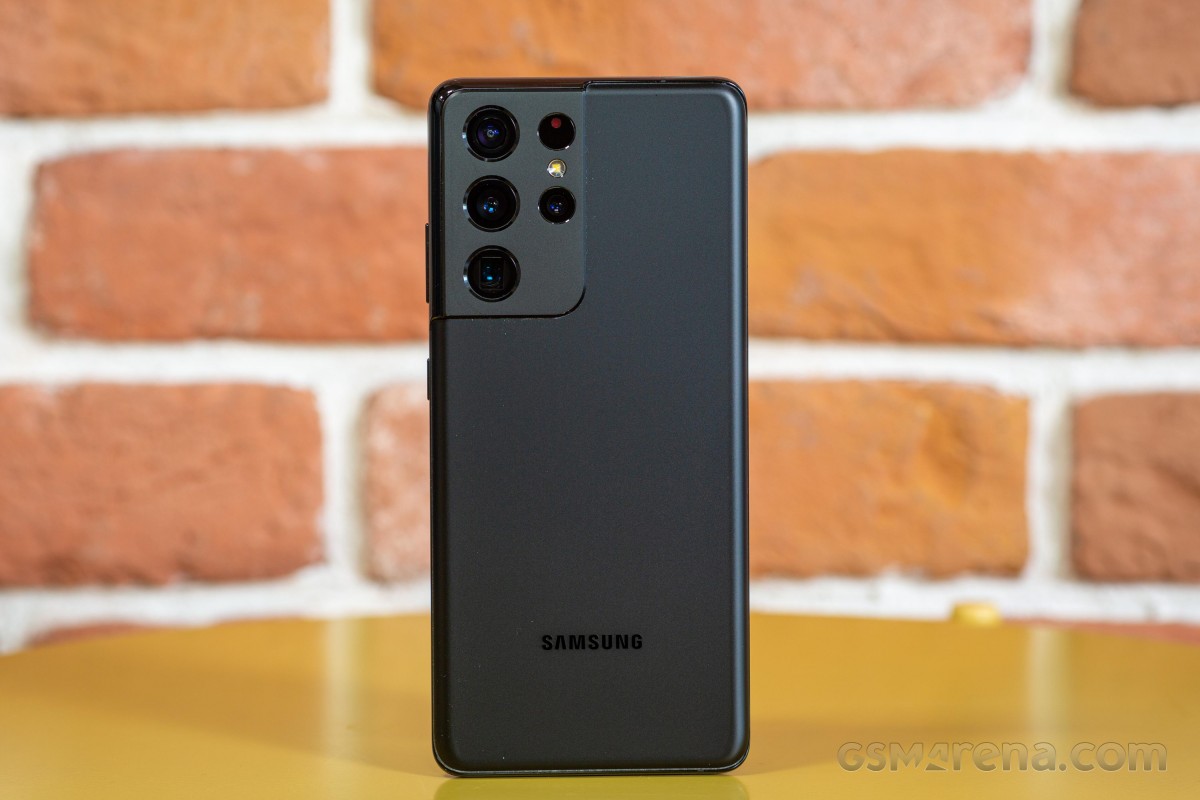 Our matte black review unit is quite possibly the best looking (and best feeling to the touch) all-black phone ever made, but it's still an all-black phone and that's rather dull. Of course, if you're team #matteblackeverything then you'll cry "Blasphemy!" at these words, but we like to live in a more colorful world. Samsung's S20 Ultra and S21 Ultra don't, though, and we still can't fathom why. The entire color palette of these handsets is heavily yawn-inducing. Before you say "office people like boring colors for their phones" - okay, but aren't the Notes supposed to be even more catered to that public? So why do the Notes get "Mystic Bronze" and green, and the S series Ultra doesn't get anything nearly as exciting? 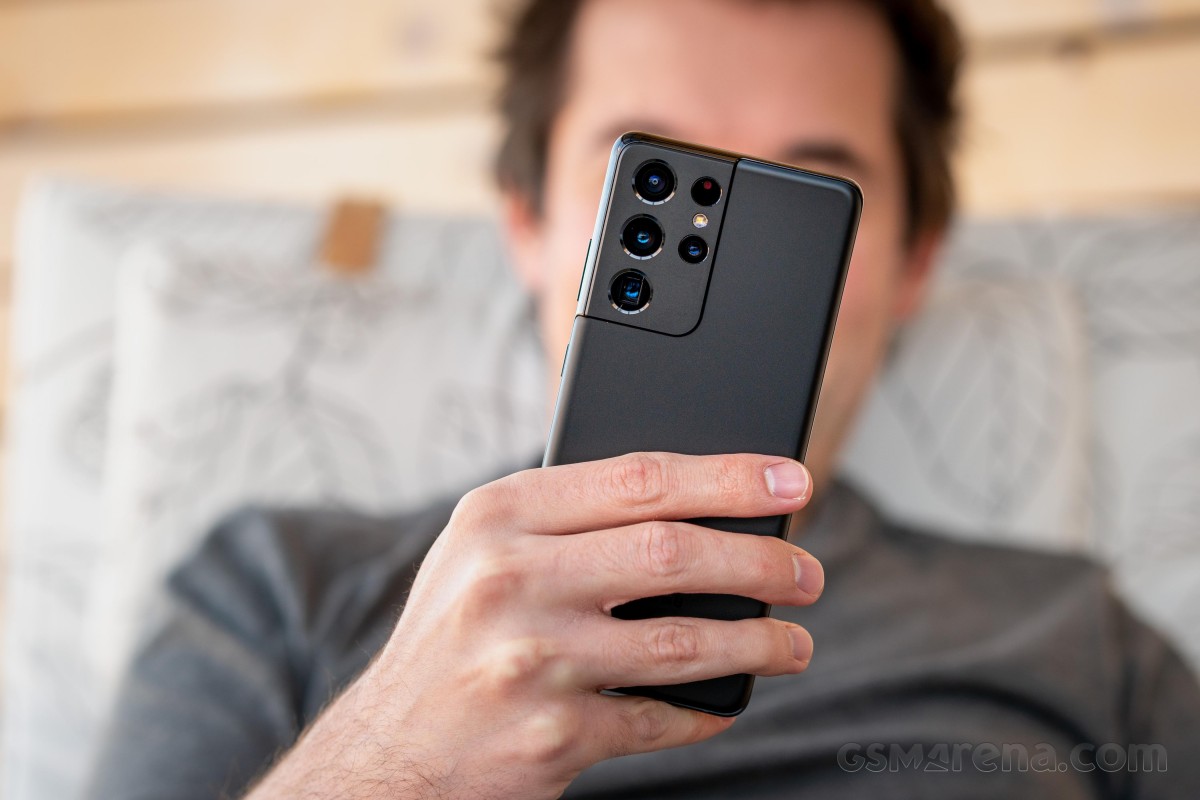 That aside, the finish on the back is great to touch, with a silk-like texture and almost zero visible fingerprints even after a while of use and a lack of microfiber cloth action. Usually the more matte a phone's back is, the more slippery it gets, but not in this case. We aren't sure what magic Samsung has access to, but this phone is actually a very slight tad less slippery than the norm. That's a huge plus in our book, but in truth even if it would've been more slippery, it's just so big and heavy that it still would be kind of impossible for it to sneakily escape from your hand in normal use.

The way in which the camera island blends with the frame in the top left area of the back is definitely still an interesting design flourish to look at, and hasn't been 'replicated' by any competitors yet, which means it makes for a very unique look. There isn't much else left to say about this handset's design, because there isn't much else to it. In all other aspects it looks just like any other flagship phone. 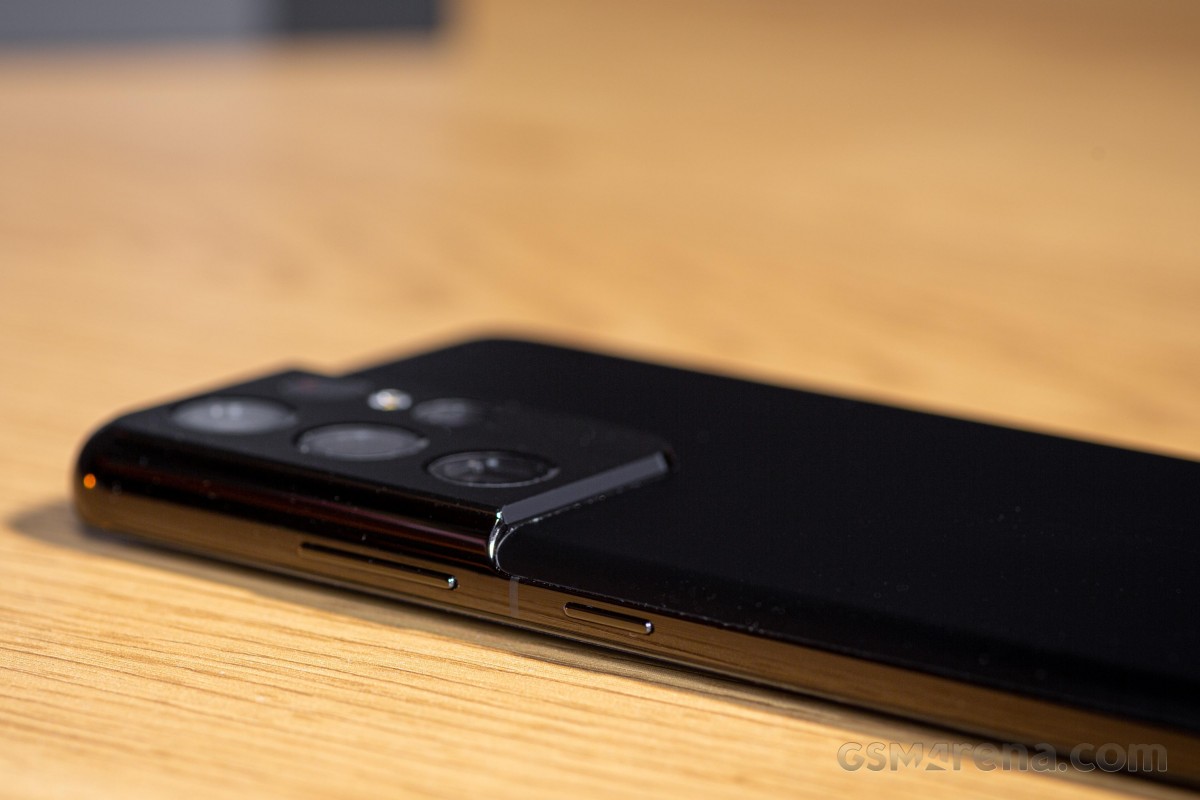 The tiny bezels on the front do positively stand out, though, and the dark gray antenna lines don't, and we like both of these things very much. Even without the camera island, this is a thick phone, and it comes with a significant feeling of heft. A lot of people like that, we would've preferred it to be lighter if not also thinner, but the big issue with handling is that it's top heavy, and rather significantly so. 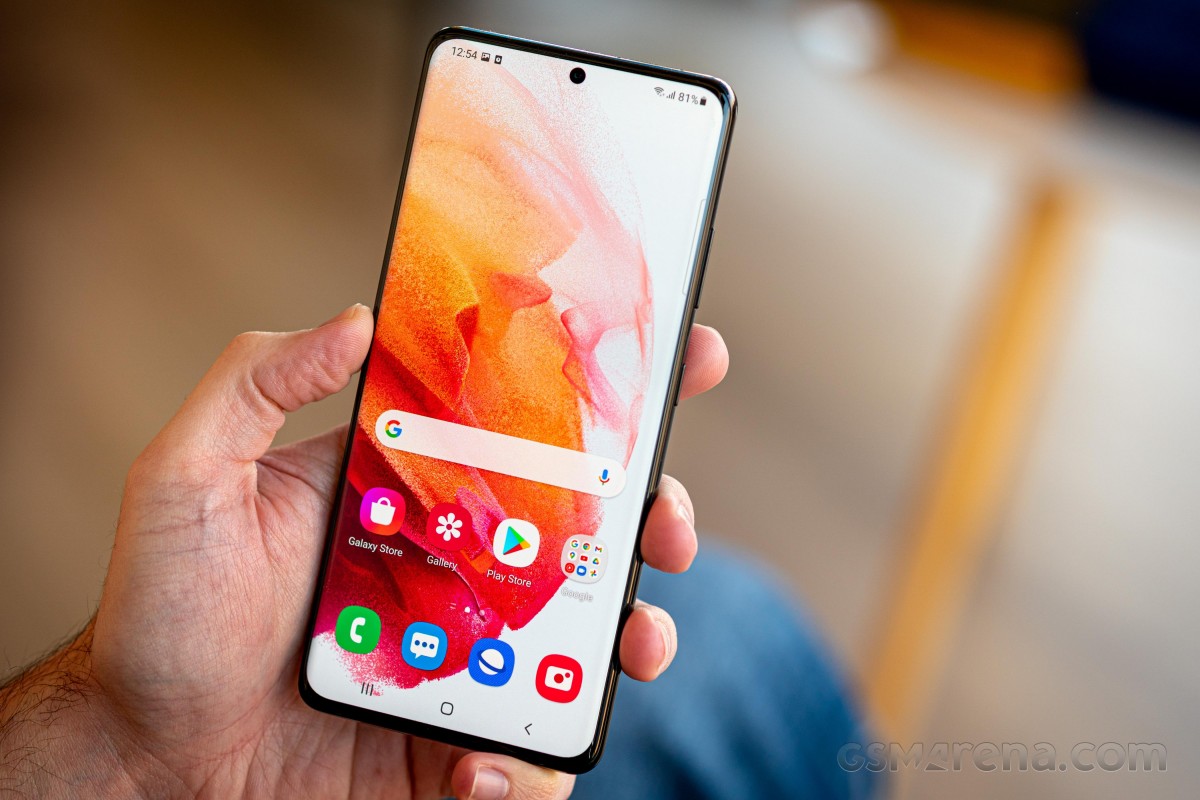 It's strange that it's been quite a while since we've had a phone this top heavy for a long-term review, we'd gotten used to more balanced weights. But with the S21 Ultra, you either need to grab it from further up than you might be used to (or comfortable doing), or you should get ready for a lot of balancing action hand gymnastics all the time. Maybe the cameras are to blame, maybe something else, but regardless, this is something that very slightly impairs usability in our book and we felt we had to mention it. In the grand scheme of things, is it nitpicking? Well, kind of. It actually mostly depends on how much you use your phone, aka hold it in your hand in portrait mode. The more of that, the worse this gets. 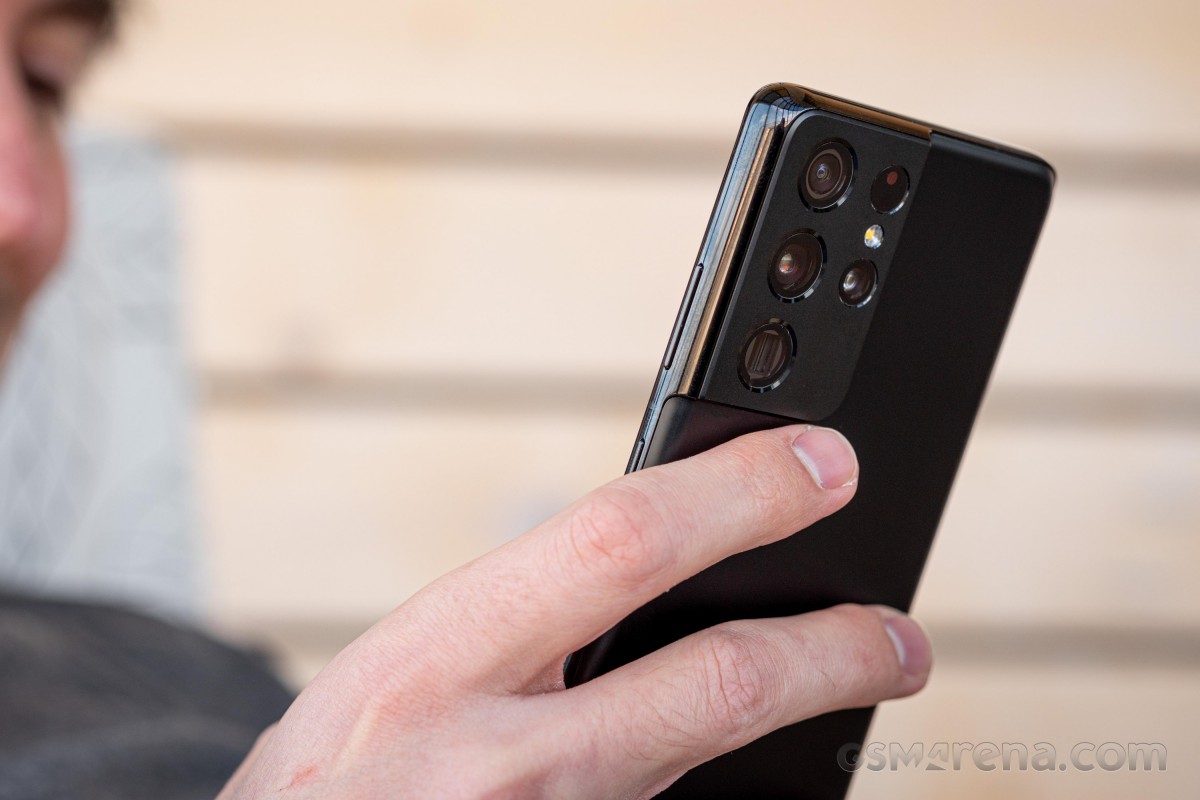 The build quality is unsurprisingly top notch, as it should be at this price. As for general handling, we're not going to lie - this isn't an easy phone to handle, because of its size and weight. This reviewer could use it with one hand without issue, but only just. The problem is that the experience is a bit jarring thanks to the combo of size (especially thickness), weight, and heaviness. It's not a huge downside, but unless you really like heavy phones, it's definitely not an upside either.

One thing we'd like to mention regarding design is the very unfortunate positioning of the microphone pinhole at the bottom, which can very easily mislead people into thinking it's where the SIM tray ejection tool needs to be inserted. Do that and the mic is bust. This is confusing design, and thus it's bad design. Not that Samsung is the only company guilty of this, or that this phone is unique in this regard, but it's always bad when we see something like this, so be extra extra careful. One split second of inattention can end up costing you dearly. 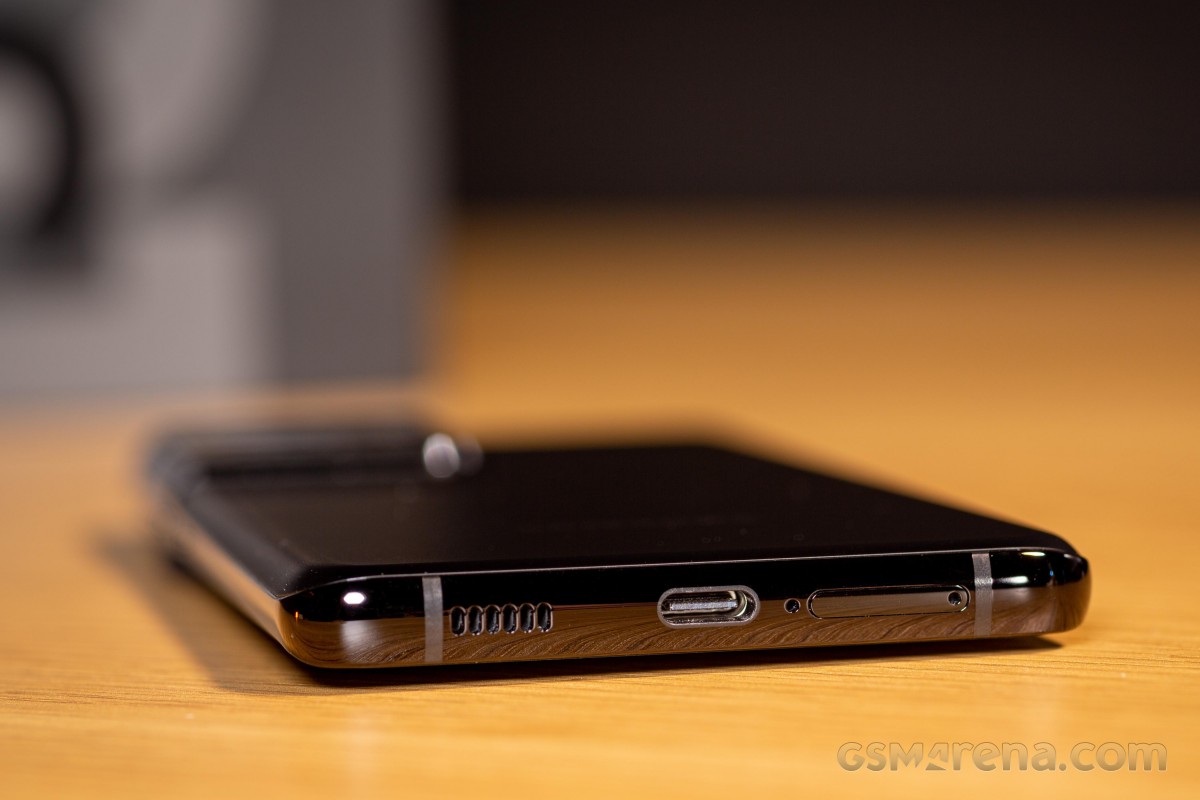 Finally, let's address the invisible elephant in the room, and that's the airiness of the box. You get no charger, and you also get no case, and we're not sure which of those omissions feels more ridiculous. People usually fret about the lack of a charger mostly, and sure, that's a good point, but Samsung's chargers aren't class-leading in speed anyway, so maybe it's okay? 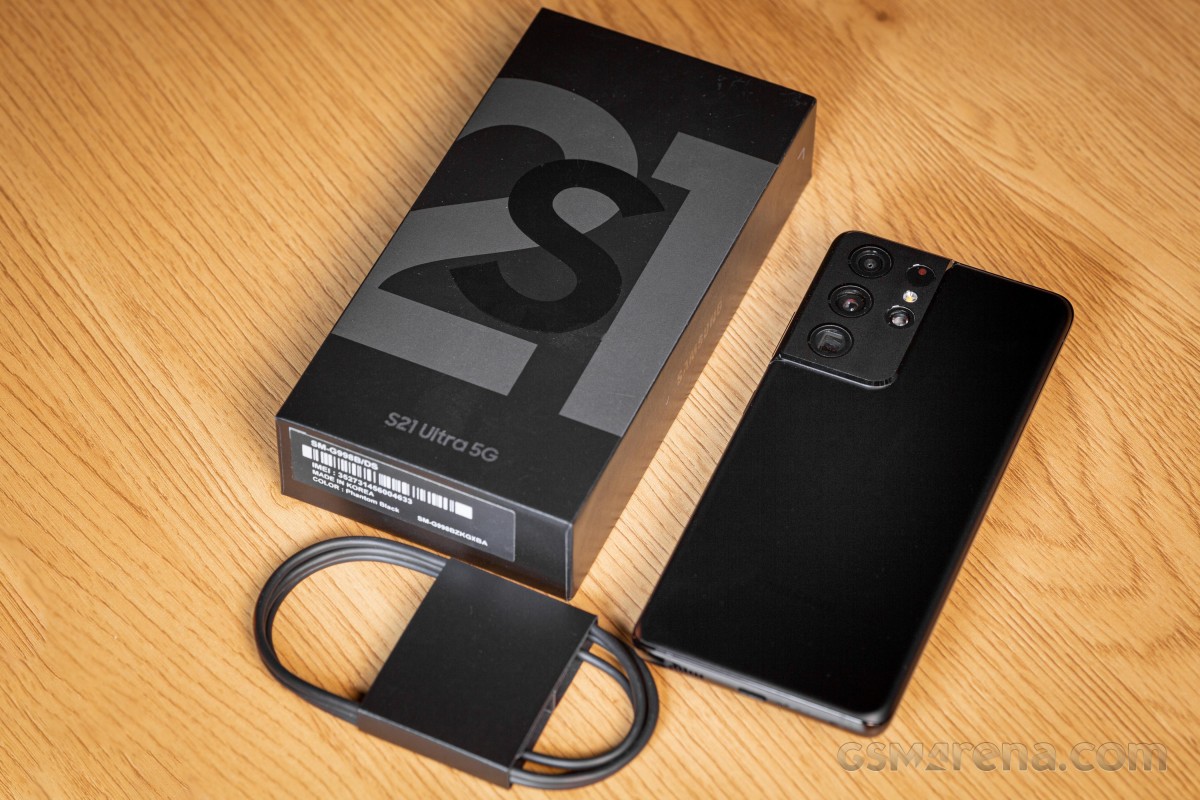 Whereas a nice quality case would probably cost the company $5 to manufacture and would add a lot of perceived value to the unboxing experience. Then again, why do that when you can sell people cases on the side, right? Right, Samsung? Right, Apple?

Okay, time for some better news. Much better, in fact.. The S21 Ultra has the best speakers ever put in a smartphone that was long-term reviewed. They're tied for loudness, in our subjective assessment, with the Xiaomi Mi 10 Pro from last year, but beat it in quality ever so slightly. You'll have zero issues consuming media on these speakers, even in reasonably loud environments. At full volume, a lot of times we were shocked that a phone can deliver such a big-feeling sound. Now obviously if you like bass, you'll need to invest in a Bluetooth speaker or three, but that doesn't take away from Samsung's achievement here. 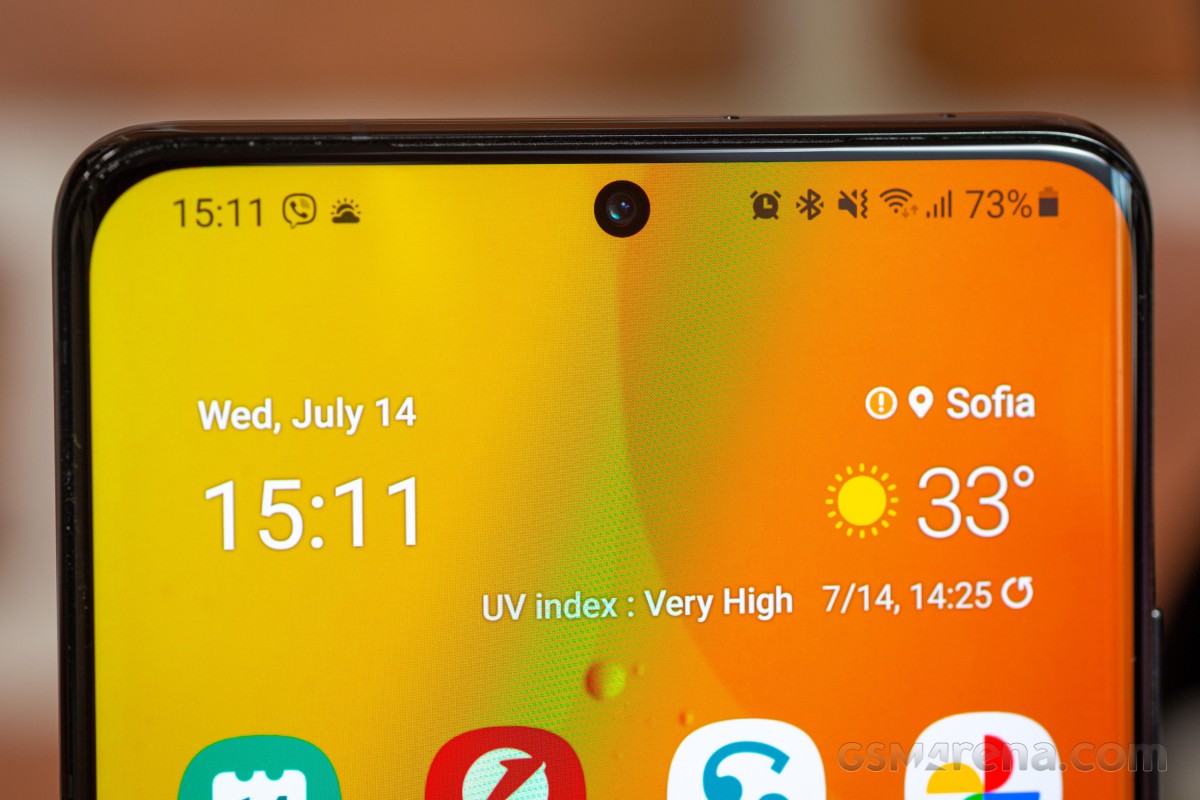 Speakerphone calls are probably the best we've experienced as well, including what's been reported to us in terms of mic quality - and you don't need to speak right into the bottom mic to be very clearly heard and understood. Speakerphone quality is one of those things that cheaper phones mainly gloss over, and even some 'flagship killer' type devices have been known to skimp on. Not the S21 Ultra, it does this very well indeed.

The vibration motor inside the S21 Ultra is very good, among the best we've tested, and among the most flexible in its range of vibrations - both in terms of perceived weight as well as 'localization' in the phone's chassis. However - whenever we talk about vibration motors, and especially very good ones like this one, we remember how nicely MIUI uses gentle nudge-like vibrations throughout its menus and interactions. One UI just doesn't do that to anywhere near the same extent, so most of the time the great vibration motor is just sitting there, unused, and that's a big waste when it comes to the user experience if you ask us.

That said, Samsung does give you some toggles for when to use vibrations, you can see these in the screenshot above. You can also customize the vibration intensity separately for calls, notifications, and touch interaction, and all of these are neat choices to have, but we wish the Korean company would go a bit further like its aforementioned Chinese competitor.

Something that was also true for the Note20's vibration motor is that if you set the phone to vibrate when it rings and use the default pattern the vibration will very much manage to wake you up - if the device is on a wooden nightstand or the likes. It's got a lot of oomph, if we might put it that way.

If you hate it so much, why use it for the past three years?

Yeah my S9 was made by Shamsung...

not good, not bad it's just another Samsung phone.