Samsung Galaxy S4 vs. HTC One: Army of two

Two flagship smartphones carrying such a weight of expectations that one would think they'd have no time and energy to worry about each other. The Samsung Galaxy S4 has to outsell the Galaxy S III and the HTC One is expected to turn the fortunes around for an ailing company. So, which one's bigger? And we mean the job, not the phone. 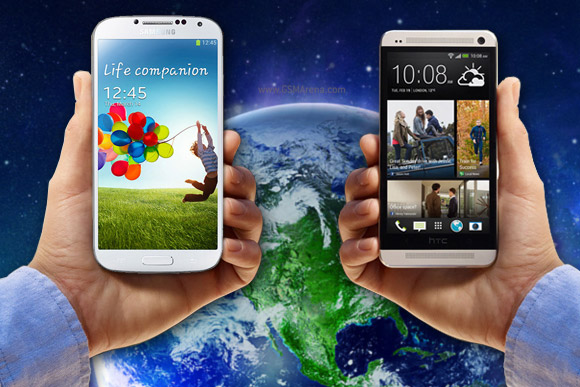 The two contenders themselves will have an entire review to each prove their point. These two superdroids make no compromise and charge big bucks. They need to make sure users are getting their money's worth. That's what flagships are all about. They win big but they lose big too - and last season Samsung and HTC were on either side of that line.

Things look different this time around. We know the two phones quite well already, the HTC One review is only just behind us, and the Galaxy S4's in the final stages. The setting for this clash has changed too - the elite flagship club isn't exclusive to top-tier manufacturers anymore. Yet, there should be no better guarantee for a thriller than the names of Samsung and HTC. The prodigy children of two of the most revered Android makers are about to fight it out, and even the slightest edge could give a massive advantage in the marketplace.

Running over the entire spec sheet of each phone will take too long - both droids are impressively armed - so instead we'll just list the differences. Here's how one is better than the other and vice versa.

Samsung Galaxy S4 over HTC One

HTC One over Samsung Galaxy S4

Looking at the two lists above, you'd thing the Samsung Galaxy S4 has the upper hand. It's not that simple - not all bullet points have the same weight. For example, we'll take the sleek aluminum unibody over a hygroscope any day of the week. And the megapixel debate for the two cameras will probably take a huge chunk of this article to resolve.

But let's look at the schools of thought behind the two phones. The Samsung Galaxy S4 is the power user's heaven with settings, tweaks and toggles scattered all over the place - with all the proper hardware support too. TouchWiz is familiar and intuitive enough so regular users will not be lost, but they might miss out on some of the more exotic features of the Galaxy S4.

Samsung Galaxy S4 and HTC One sizing each other up

The HTC One is quite the opposite - it aims to make things simple. Zoe looks impressive, but require nothing of the user, it's all done automagically. The Optical Image Stabilization and Beats Audio similarly work behind the scenes to enhance the experience.

Anyway, let's take this one step at a time. Just one important note before we let the HTC One and the Galaxy S4 off the leash. The Samsung flagship in this shootout is the I9505 version, the one powered by a Snapdragon 600.

It's like comparing LG L15G Sunrise to Alcatel A521L Pop Star 2 LTE. The HTC One is obviously better.

Is it have supporting 4g