The front of the Galaxy S4 zoom is a direct copy of the S4 mini - there are the front-facing camera, proximity and ambient light sensors around the earpiece and the hardware Home and capacitive Back and Menu keys below the screen.

One thing we liked (even if it took a little getting used to) is that the camera app disables the capacitive buttons. Those are too easy to press accidentally when you hold the zoom in one hand.

The hardware shutter key is another matter though, it's fairly comfortable even though it would have been slightly better to use if it was slightly further to the left. It can be half-pressed to focus and will launch the camera app if you hold it (but it doesn't automatically unlock the phone).

On the Galaxy Camera there was a zoom lever around the shutter key, but is missing here. Instead, you can use the control ring around the lens to zoom in and out (or use the volume rocker as on a regular phone).

The ring has a ridged exterior for extra grip, but rotates smoothly (there are no distinct steps). At the moment, the ring only controls the zoom, but we hope Samsung adds an option to control things like aperture, shutter speed and so on.

Anyway, the ring has an advantage over the zoom lever, it's much easier to get a specific zoom level.

Next to the lens is the xenon flash and LED light. The flash is always available, you don't have to manually extend and retract it like on the Galaxy Camera. On the other side of the lens is the loudspeaker grille.

Xenon flash and LED light, plus loudspeaker grill next to the lens

The top side of the Samsung Galaxy S4 zoom (left in camera orientation) holds the 3.5mm audio jack, secondary microphone and the IR blaster.

On the bottom (right) is the primary mic and the MHL-enabled microUSB port. The USB port is actually at the edge of a plastic flap that covers the battery and microSIM card slot. The battery compartment was borrowed from digital cameras and features a lock that holds the battery in place.

The battery has 2,330mAh capacity, a bit more than the Galaxy S4 mini got and not bad for a point-and shoot camera. Keep in mind that most such cameras don't have active radios, which can drain the battery pretty quick. Note that the unit Samsung sent us (a retail unit according to company) had a battery labeled "2,130mAh", but the official specs of the Galaxy S4 zoom say 2,330mAh battery capacity.

The Samsung Galaxy S4 zoom scored a respectable endurance rating of 61 hours over the 54 hours of the S4 mini. The talk time was pretty good at 15 and a half hours, but the web browsing and video playback were both lower than the mini's times (by one and four hours respectively). You can read more details about the Galaxy S4 zoom battery performance at our blog. 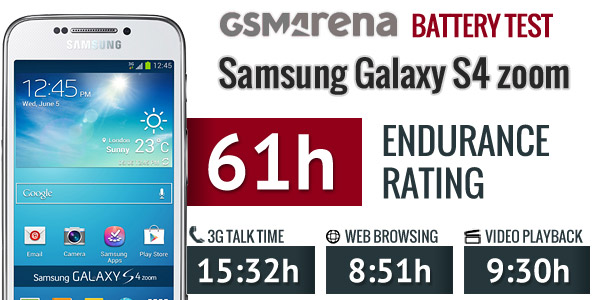 The microSIM card slot can easily be accessed without having to remove the battery, which is great if you need to swap out the card (the Galaxy S4 zoom will probably not be your primary device and you won't keep a SIM in it at all times).

The microUSB port handles charging, data connectivity and TV Out duties and can be used with the flap open or closed.

Moving on, the left side of the phone (bottom for the camera) offers a microSD card slot, tripod mounting hole and the lanyard eyelet. The microSD card slot is covered by a plastic flap and the card is easily hot-swappable. You'll probably need a card in there as the S4 zoom comes with only 4GB of built-in storage and there's less than 3GB available to the user.

Along with the Samsung Galaxy S4 zoom, we also received a case for the device. It consists of a rubbery strip that encircles the phone and has buttons for all the controls. It keeps the microUSB port exposed, so you can charge the zoom and download photos without having to remove the case.

The case probably won't protect the device against drops, but at least the screen will be safer under the flap. The flap has a groove about a third of the way from the side so you can flip it slightly open to take a peak and close it. It's an active cover too, so the screen wakes automatically when you do that.

A flip case for the Galaxy S4 zoom

There's a hole for the earpiece so you can talk with the flap closed, but there's no window that shows a part of the screen with the time and notifications.

youay've used up your allotted data plan allowence. you may have an incorrect apn setting, or your phone may have been locked down only usable thru them.bnone other.

my phone network stop wat can i do

I turned on my fone buh it stop booting and didn't pass d samsung label, what can I do