The Galaxy S8 Active we received is from AT&T, so it has AT&T's own packaging. The box is black with a blue accent that goes all the way around with the AT&T logo right on top. On the front and back of the box you can find the phone's name written in bold white letters.

Braking the seal of the adhesive we can slide the box's lid up and take a peek at the phone, which we got in Titanium Gold. Underneath the phone is AT&T's usual reminder to never text and drive. Aside from the usual documentation, the Galaxy S8 Active comes with an Adaptive Quick Charger (5V@2A or 9V@1.67A) w/ USB-A to USB-C cable, OTG to USB-A adapter to facilitate the phone transfer process, and a micro-USB to USB-C converter so you can use your old cables with a USB-C port.

Contents of the box

What's totally missing from the Galaxy S8 Active's package is a pair of AKG earbuds. We're not sure about the exact logic behind this other than saving some money, last year was the same situation.

The design of the Active series of Samsung smartphone varies a lot year after year. Last year's Galaxy S7 active was quite chunky with those physical buttons. This time around, the Galaxy S8 Active no longer has any buttons on the front since Samsung ditched the capacitive keys. This gives the phone the appearance that doesn't suggest it might be outdated. 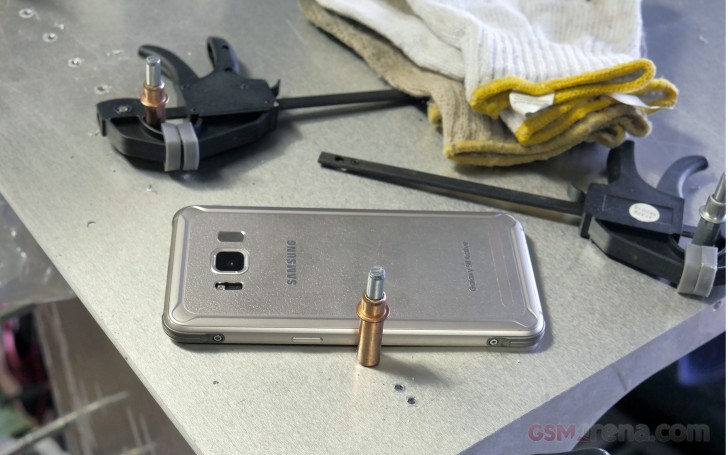 There are a variety of materials and textures on the phone. In fact, looking at one of the corners strangely reminds us of a Las Vegas hotel: layers of architecture. The S8 Active certainly has more exterior parts than the previous model did. At the same time, more of the metal frame around the device is exposed to help dissipate heat.

Corner of the phone • A better look at the bumper

The corners of the phone are reinforced with bumpers on the top and bottom of the phone. These bumpers are made of dense rubber that's soft to the touch and held in with torx screws. However, we casually dropped this guy on a concrete office floor and found tiny dents in the exposed metal of the corners.

Had the bumper been like the one on the S7 active, there would be zero dents on our unit. No biggie, although, the design took a quarter step backwards - if you ask us. Then again, perhaps it was for a reason, the additional exposed metal pulls more heat away from the metal edges of the phone.

The top of the phone has a noise cancelling mic, and the SIMcard slot. Since the bumper is dense rubber, the SIM tray's exterior is metal, but painted with a rough texture to blend in with the rubber. On the underside is a 3.5mm headphone jack, USB-C charging port, in-call mic, and loudspeaker - which is similar in design to the ones on the S8(+) and the Note8.

The left side of the phone has three buttons: the volume rocker and - surprise - the Bixby button, which has a very faint texture to it. It's not deep enough to feel through your finger, so chances are you'll be accidentally pressing it all the time. The right side only holds the power button

The front of the phone is home to Samsung's beautiful Super AMOLED display, which is the same size as the one on the Galaxy S8. The main difference is the S8 Active is not curved. Otherwise, another noticeable difference is the amount of additional bezel area. Since the S8 has such small bezels, the chance the display or glass breaking is much more probably.

Since the Galaxy S8 Active is a tough and rugged smartphone, there needed to be some more meat around the display in order to keep the tolerances of a "shatter resistant" smartphone in check. This is by no means a deal breaker. If you care about the numbers, the S8 Active is 75% display while the S8 is 83.6%. These are approximate figures.

At the top of the phone's display are the same array of sensors found on the S8: the in-call receiver (ear piece), notification LED, proximity sensor, light sensor, front facing 8MP camera, and the two sensors needed for iris scanning.

There's a lot going on in the back, so let's take a closer look. The metal frame subtly blends into the rugged backside of the phone. The entire back plate of the phone feels like it is made of the same dense rubber material as the bumpers and is also soft, yet grippy. The flat part of the back plate is ever-so slightly recessed, maybe in case the phone falls flat on a tiny pebble.

But a more possible reason is to protect the 12MP camera lens, which is protected by a square, metal bracket, and we've seen this same metal bracket in previous generations of the active model. To the left of that is the LED flash and heart rate sensor (which doubles as a shutter button when taking selfies), and on the right is the new and controversial fingerprint scanner.

Although the phone feels chunky in the hand, it feels sturdy in all the right places. This isn't a phone that you throw in a case, it's a phone that can take a beating without a case, and that's been the same case (no pun intended) for previous generations of the Active phone.

It feels a bit heavy, but sturdy at the same time. Honestly, this thing it built like a tank. You won't be disappointed with its construction.

Galaxy S8 Active in the hand

Next up is display, connectivity and battery life. We are expecting to see the same, quality AMOLED display as is found on the Galaxy S8 as well as killer battery endurance. Let's see how it did.

I do think that Samsung stopped making Galaxy Active phones because of the XCover lineup.

I love this phone. I would be looking to upgrade, but they stopped making the active. It's the best phone they've ever made. I've dropped it down stairs and into rivers and it is still running strong. I will keep it until I can find a ...