Retail package as basic as it gets

The Samsung Galaxy S III mini comes in rather standard retail package, with the usual set of accessories.

You get a charger and a USB cable for tethering your Galaxy S III mini to your computer and a headset. The charger has its own wiring and doesn't need the USB cable, so you can keep one at home and the other at your office.

The Samsung Galaxy S III mini measures 121.6 x 63 x 9.9 mm, which is just about the size of the original Galaxy S. The mini is certainly way more compact than the current Samsung flagship, but its form factor is nothing out of this world. What we mean is you get 34% less screen in 26% less front surface - not exactly an engineering masterstroke.

The Galaxy S III mini is a tad larger in every direction than a Motorola RAZR M, which fits a bigger 4.3" screen and a beefier 2000 mAh battery, so Samsung could have used the available space better.

Keep in mind though, that the Samsung smartphone has hardware keys, whereas the Motorola handset relies solely on on-screen navigation.

While we did have our reservations about the Samsung Galaxy S III all plastic construction, its design is one that grows on you. What's more, the Galaxy S III mini is not facing the same kind of elite competition as its bigger sibling, so its looks might actually be an advantage. There aren't any polycarbonate bodies to be had in the Android mid-range, so some high-quality plastic is quite welcome.

Bellow the display you get the same three keys - capacitive Menu and Back buttons and a regular press Home key.

The usual set of keys sits below the display

Above the display we have the earpiece, as well as the proximity sensor. There's also a VGA front-facing camera for video-calls here, but no ambient light sensor, which means that automatic brightness control is a no-go on the Galaxy S III mini.

There's a front-facing camera but no ambient light sensor

The left side of the Samsung I88190 Galaxy S III is where the volume rocker is located.

The volume rocker is on the right

On the right side there's only a power key. Since the original Galaxy S III lacked a dedicated camera key, it would be foolish to expect one here.

The power key is in its usual spot

The 3.5mm audio jack is at the top of the Samsung Galaxy S III mini. There's no secondary microphone here, as there's no active noise cancellation or stereo sound recording in videos.

The microUSB port sits alongside the primary microphone at the bottom and is used for both data connections and charging. USB host and MHL are not supported.

The microUSB port and the primary microphone

The back of the Samsung I8190 Galaxy S III mini is where the 5 megapixel camera lens is located. It has the LED flash and the loudspeaker grille on its sides.

Removing the battery cover reveals the 1500 mAh battery. Bellow it are the microSD card slot and the SIM slot, which takes regular size SIMs. The memory card slot is located below the battery, so hot-swapping is not an option.

The microSD card slot is under the battery, so no hot-swap

The Samsung I8190 Galaxy S III mini managed a pretty respectable 42h endurance rating in our dedicated battery test. It's not quite as good as the 50h score of the Galaxy S III after the Jelly Bean update, but the mini will still easily last you for a day. Even two if you aren't too heavy an user. 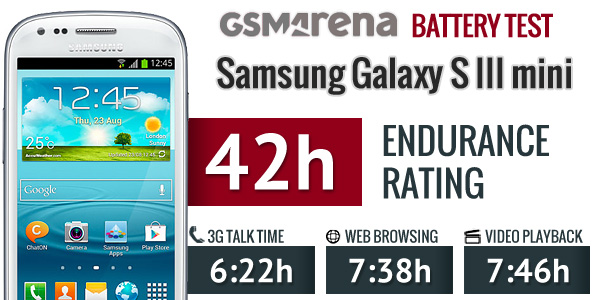 The complete test is to be found here. You can find more about what we test and how over here.

Why are you using a 10 year old phone, it does not work anymore.