The Samsung Galaxy Tab family was introduced back in 2011, to at least get a foot in the door swung open by the rising Apple iPad. The Tabs came in a variety of sizes and connectivity options with displays ranging from 7 inches all the way to the massive 10.1 inches, and more combos of screen resolution and processor specs than you can shake a stick at.

Just by comparing Samsung's and Apple's lineup, you can see two very different strategies at play - while Apple relies on the exclusivity of their devices and content to garner interest in their products, Samsung instead hopes to cater to every possible market segment under the sun - and has been immensely successful in the process.

It is exactly tablets though, where Samsung have been struggling to match the kind of impact they've had in phones. The latest Galaxy Tab 3 10.1 is in a way affected by the shifts in Samsung's tablet strategy. In an ideal world, the Galaxy 3 10.1 would've been the Koreans' flagship slate. But that position is already filled by the Note 10.1, with a successor possibly in the pipeline. 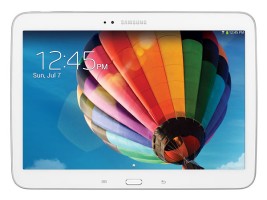 So, the Galaxy Tab hasn't got top of the line specs and comes across as a routine upgrade, whose single clear-cut advantage is the latest software version available. The latest Android build, 4.2.2 Jelly Bean, comes with arguably the most feature-rich custom UI from Samsung - TouchWiz 5.0. But how does it stack up to the likes of the iPad 4, or a handful of emerging Android tablets? Let's take a look at the key features at a glance:

Given the rather modest spec, including a dual-core processor, compared to some quad-core-powered full-HD-screen-flaunting droid tablets, it's more fitting to look at the Galaxy Tab 3 10.1 not as a high end device, but as a midranger with a large screen, aimed at a more price-conscious crowd. This goes in hand with a prominent trend of big screens in the midrange, like the Samsung Galaxy Grand and the Samsung Galaxy Mega.

It's clear that while the Galaxy Tab 3 10.1 gives you a large 10.1-inch display, it's not the pinnacle of Samsung's tablet lineup - that honor still belongs to the S-pen capable Samsung Galaxy Note 10.1. Nevertheless, the Tab 3 10.1 offers a compelling connectivity package, and could prove to be an enticing offer in its price range.

We'll get this review rolling on the next page with our usual hardware tour. Next up, we'll be curious to see that new generation dual-core Intel Atom in action, which is a first on a tablet.

My device cannot read the sim card any suggestions plizzz

This tab is on sale at amazon for $100 off. Don't know how long it will last.