As its name suggests, the Galaxy Tab S4 10.5 comes with a 10.5" screen. Samsung kept a minimal amount of bezels for those times when you use the tablet handheld (i.e. not in the keyboard dock). It's about the size of a notebook you may carry in your backpack. The Tab S4 is the first tablet with an Iris scanner, which replaces the fingerprint reader of the Tab S3. The scanner is positioned near the selfie camera, which means that it's on the left side when you hold the tablet in landscape orientation. We suggest you unlock it in portrait, however, as otherwise you run the risk of covering the sensor with your hand. When the tablet is docked, there's no such issue.

At 7.1mm, it's easy to slip into a protective sleeve and at 482g the weight feels balanced. The keyboard cover makes it thicker, but that's actually a good thing - the keys have good travel and the keyboard is rigid enough not to flex as you type.

On the outside, the keyboard cover has a texture that feels halfway between cloth and rubber. Its grippy and it can take a beating. The inside has a soft touch finish that will guard the tablet's glass back from scratches.

The cover has a magnet that snaps the tablet to the pogo pins (there are notches to help guide it to the right place). There's another magnet to hold the keyboard closed so it won't flip open when you pick it up. The cover extends slightly beyond the tablet itself, giving you enough room to put your thumb there and push the cover open.

The ergonomics of the S Pen are pretty great and it's all due to its size - it looks and feels like a regular pen. We would have liked a grippy texture at the bottom, but it's not a huge deal.

The bad news is that unlike the Galaxy Note stylus, this S Pen cannot slot into the tablet, so you have to carry it separately. There's a "pen cap" attached to the keyboard though, that will certainly reduce the chance of you losing the stylus.

The Galaxy Tab S4 10.5 can operate as a regular Android tablet, but the second you connect it to the DeX dock or even the keyboard cover, it launches the DeX mode. There the stylus is central to the experience.

When using the tablet in DeX mode you need to get out of the Android headspace. Running apps are accessed from the bar at the bottom, the regular app switcher is still available but requires an extra tap.

It's more of a 'keyboard and mouse" experience than a touchscreen one. The notification icons are tiny and even the icons of running apps are smaller than the same icons on the homescreen. This requires a bit of extra precision when tapping them with your finger, it's much easier to use the S Pen.

The multitasking pushes things further into a PC-like experience. Each app launches in a resizable window and while it's usable with fingers, it just works better with the stylus.

Even the homescreen feels like a desktop - there are no multiple pages and no widgets either. There's a bit of a Chrome OS vibe to the whole thing. For finger navigation, we prefer to stick with the non-DeX mode as its larger UI elements are much easier to hit with fingers. But DeX is what makes the Tab S4 special, so we rarely disabled it and stuck with the stylus. 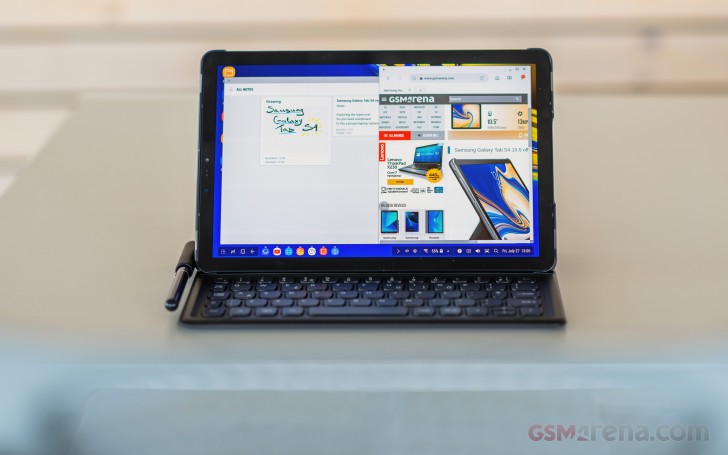 The keyboard doesn't add much to the way you navigate the UI. There's a button that instantly opens the app drawer in search mode, so launching new apps is just a few keystrokes away.

Alt + Tab does work for flipping between apps as you would expect, but this PC mindset also had us reaching for an Escape button that isn't there - if not Escape, a Back button would have been appreciated.

The Samsung Internet browser is much more shortcut-friendly than other apps. Backspace works as back, CTRL+Tab cycles through open tabs, CTRL+W closes them and so on. But then you go into the Gallery app and you need to reach up from the keyboard to press the (small) Back button on the screen.

The Keyboard Book cover is primarily for typing then. And sure enough, Microsoft Word and Excel come pre-loaded. Typing up a document and navigating cells with the arrow keys is certainly more convenient than doing the same on a touchscreen.

When you plug into a desktop setup over DeX with a proper monitor, keyboard and mouse attached, the border between a tablet and computer dissolves even more. Thanks to the new dual monitor feature, you keep certain apps on the tablet screen - e.g. a chat window or an app that works better with touch - and others on the monitor - e.g. the productivity apps that need a lot of room.

In DeX mode you'll be able to use the tablet and stylus combo as a digital sketchpad. Alternatively, the tablet's touchscreen can work as one large track pad.

Samsung's own PENUP is here to make use of the S Pen's artistic capabilities. You don't need to be an artist, not at first. The app has "replays" of line drawings that animate on screen. When they finish, you can trace over them to get the hang of it. If you want even more simple, there is even a digital version of a coloring book.

We found that the keyboard cover is stable enough that you can draw with the screen propped up if you prefer. You can press hard on the screen without having to support the screen with your hand and the rubbery finish of the cover keeps it from sliding too much. This works great with the drawing tools that respond to pressure. The charging dock we tried was less stable, but it would do for a quick sketch. 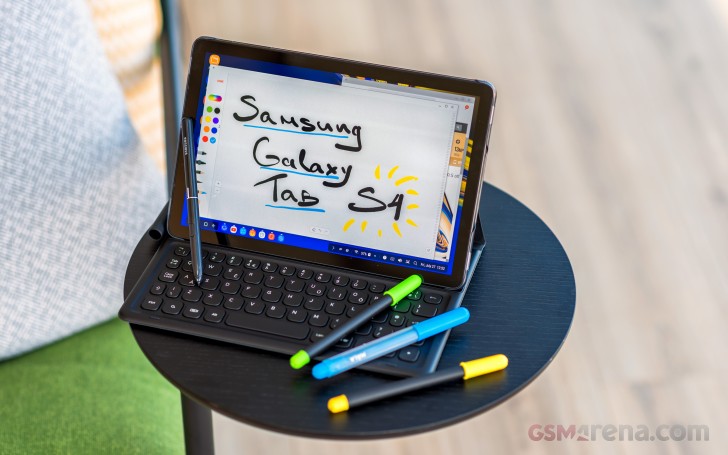 Similar to the Galaxy Note phones, the tablet supports Screen Off Memos - just press the S Pen's button and tap the screen. Jot down your thoughts on the black screen (perfect for late night ideas) and the memo will be saved in Samsung Notes.

The charging dock is better suited for watching videos. The Super AMOLED screen has a way of making movies and even your own videos pop. The 2,560 x 1,600px resolution keeps them looking sharp.

Samsung equipped the Galaxy Tab S4 10.5 with four speakers, two on each side pointing outwards. They have been tuned by AKG so they sound good in general, but the best way to enjoy them is to find content that uses Dolby Atmos. Netflix and Hulu support it, but so do YouTube and Facebook, so there's no shortage of content.

The tablet has a 7,300mAh battery, which Samsung claims is good enough for 16 hours of uninterrupted video playback. You get a Fast Charger in the box (15W) that goes through the USB-C port (which is rated for USB 3.0 speeds).

We also have a Charging dock on hand, it uses the pogo pins instead. It's limited to 10W when charging and to USB 2.0 speeds, but it does add convenience.

The Samsung Galaxy Tab S4 10.5 is clearly designed for road warriors. There's a version with LTE, but the Samsung Flow app makes tethering the tablet to your phone's data connection easy. The magnets and pogo pin system makes the tablet easy to snatch out of the charging dock when you leave and put it back in when you come back home (DeX relies on the USB-C port, though).

Even if your work requires a lot of storage (e.g. reviewing photos you shot with a DSLR), the tablet has you covered. The base 64GB built in storage plus a microSD slot is a good start and there's a version with 256GB built-in if you really need it.

We didn't run benchmarks, but the Snapdragon 835 with 4GB of RAM feel snappy, even when you juggle several app windows. Most Android tablets these days don't get a flagship chipset, even if it's a generation old - the tablet segment has moved more into a mid-range segment, which makes the Tab S4 something of an exception.

The S Pen is bundled with the tablet and it really is essential to the experience. Google abandoned the tablet-specific interface a long time ago and the phone UI doesn't scale well to 10.5". The customizations by Samsung make this feel closer to a laptop/PC.

The Galaxy Tab S4 10.5 is best when space is at a premium. That is both space in your luggage, but also space to work - it's tiny enough to fit even on an airplane tray or just to sit on your lap. Its selection of docks and the keyboard cover help it scale up to a full desktop and down to just a note-taking tool.

Best tablet has been ever made.

I m using tab s 10.5 and i am definitely going to buy this