The software experience on the Tab S5e, for the most parts, is similar to that of Samsung's recent smartphones. It comes with the Samsung One UI, which, for all intents and purposes, looks like the phone UI stretched over to the bigger screen. 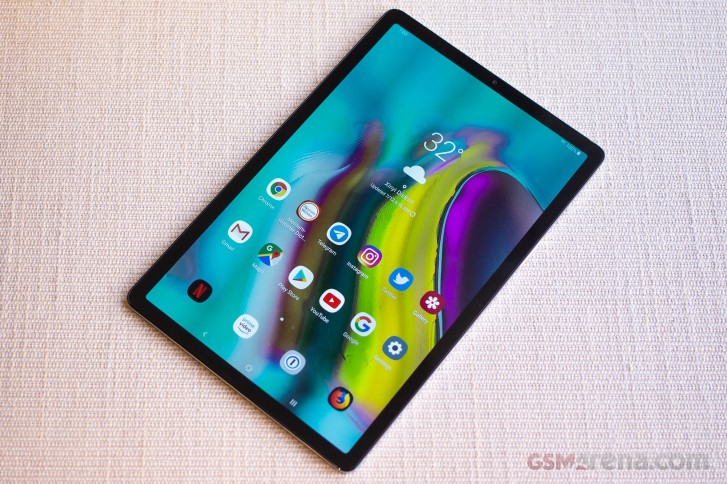 It doesn't help that that's how most of the third-party apps look like as well. Android never had a great selection of tablet optimized third-party apps but now that all the developers have entirely given up on the platform you can see more clearly how bad the situation is.

While some apps do two-panel layout thing, that's mostly the extent of their tablet support. Most apps don't even do that and then there are apps like Instagram that won't even rotate to landscape.

Samsung One UI on tablets

Samsung tries to fix this a bit with the DeX mode, which transforms the UI into this desktop like UI paradigm. This works okay in some cases as you can now have more than two apps open side by side, which you can't in the standard tablet mode. However, because the display real estate just isn't there, realistically you can only open two windows before it starts to look crowded.

To make matters worse, not all apps play nice with DeX mode. A lot of apps won't open at all in this mode. And then there's YouTube, which cannot be minimized or else it stops working.

Still, the DeX mode is largely an improvement over the otherwise disappointing Android tablet UI and when it works, it works quite well.

What ultimately lets it down and the entire tablet in general is the performance. Our review unit came was the 64GB configuration, which has 4GB of RAM. This, coupled with the Snapdragon 670 chipset meant that the biggest usability bottleneck with this device, more than even the non-existent Android tablet apps, is performance. The device just feels too slow even when you're using one app at a time and having more than two open is just a punishment for yourself and the tablet.

The result of this is that apps frequently close in the background. Once, we had some text written out in the browser and after switching to another app and switching back caused the entire browser to clear and reload from memory, which deleted all the text that was entered on the webpage.

The best use-case scenario for this tablet then is multimedia. We did have quite a good time watching content on the Tab S5e thanks to the amazing display. The quad speaker array, allegedly tuned by AKG with Dolby Atmos effect, also sound pretty great. There's no headphone jack here unfortunately but you do get a dongle.

When we say multimedia, we really only mean watching videos. Gaming isn't really enjoyable on this tablet as the high-resolution display coupled with a relatively mid-range chipset meant that performance wasn't very good. It's fine for simple 2D style games, though. 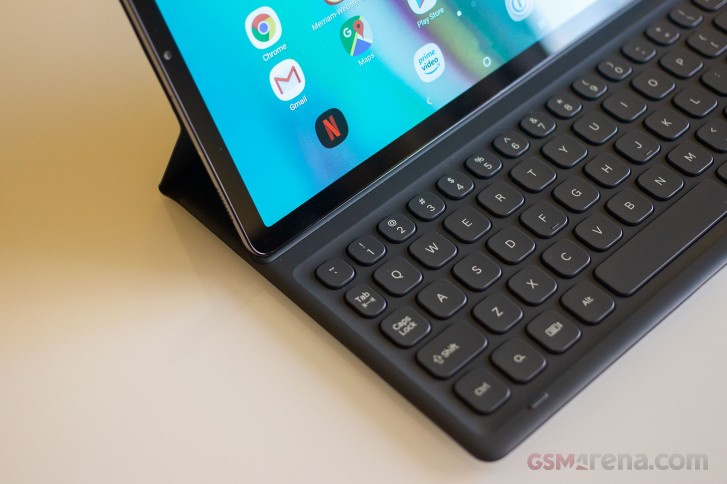 As we mentioned before, we did also get the Book Cover Keyboard from Samsung along with our Tab S5e. The keyboard was also a mixed bag. On the positive side, you can get used to typing on it fairly quickly and the keys feel light and clicky. It also doubles up as a kickstand when you just want to watch something, which is what we mostly ended up using the cover for.

Unfortunately, it does have a couple of issues. For some reason, opening the keyboard does not turn on the screen of the tablet, nor does closing the cover turn the tablet off. This seemed like a weird issue as both the tablet and the cover seemed to have magnets for the hall sensor but they don't seem to work for whatever reason. Also, as mentioned before, the cover also makes it difficult to use the already difficult to use fingerprint sensor on the side.

I didn't know why the review on GSM Arena and many reviewer are take negatif for this tab s5e.... its a great tablet i have seen... ok, tab s6 and ipad pro is better... but the price so expensive...not valuable to use... ipad and s6 just waste the ...

Nice tablet! Runs smooth and a great value.Plus the screen! Chill out Grinch!

Oh my goodness, that reviewer hates it so much. Everyone on youtube pretty much just praises it. This guy probably had a bad day :))