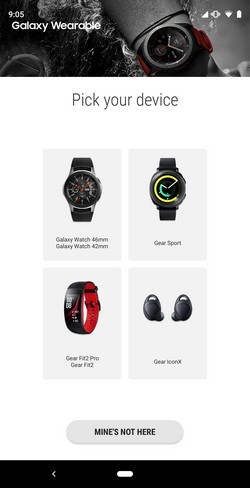 Last week Samsung announced the Galaxy Watch alongside the Galaxy Note9. The new wearable switches from the Gear branding of its predecessors in order to make the company's portfolio of products more consistent from that point of view.

Today the companion app has been updated in the Play Store to also reflect the name change.

Farewell Samsung Gear app, hello Galaxy Wearable. The new version should support the Galaxy Watch, as well as work on Android devices running the latest version of the OS - namely Pie. That was one of the oversights so far, the last version of the Gear app did not pair Samsung's wearables with a Pixel or Essential Phone running Android 9.

Although this is the theory, we're still having trouble connecting our Galaxy Watch hands-on unit to an Galaxy S9+ with the Galaxy Wearable app installed, so your mileage may vary. We assume things will be properly fixed within the next few hours or days - certainly before the Galaxy Watch hits the shelves.

Like the Gear app before it, Galaxy Wearable supports the Korean company's full array of wearables, it's not just for the new Galaxy Watch. So if you have a Gear S3, Gear Sport, Gear IconX, or another such device, you'll be using this app from now on too. It should arrive as an update to the Gear app any moment now.

Hi, all I'm wondering is it possible to pair Galaxy watch with Huawei P20 Pro, because i ca not find any information about this combination!

They removed samsung pay on my gear s3 tmo. Wtf