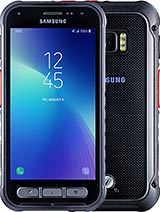 GaMedic, 29 Jul 2022I have been searching for a replacement for my S7 Active si... moreTry the s8

CAVBR, 22 Nov 2022SM-G889F (UK and Ireland) and SM-G889N (South Korea) are al... moreI think the SM-G888N0 was a distinct device - it looked quite similar to the FieldPro, but it had different hardware (most obvious difference being the missing fingerprint reader, and allegedly S7 internals, i.e. Exynos 8890). It also did not seem to have any catchy name yet; I have seen some Samsung brochure refer to it as the PS-LTE device, but mostly it is just the SM-G888N0.

Zakalwe, 27 Mar 2022I think it varies even between regional versions. The phone... moreSM-G889F (UK and Ireland) and SM-G889N (South Korea) are also running Android 10.
SM-G889G (Singapore) appears to have received Android 11 as it has a manual for that version of Android.
And there was also the SM-G888N0, the previous launch of the Galaxy XCover FieldPro exclusive to South Korea, which remained on Android 6.

Zakalwe, 01 Jul 2022Samsung is generally decent when it comes to updates. Other... moreI think the reason behind why this phone retails at an atrocious price and hasn't got proper updates is that this may be the last phone designed by Samsung themselves instead of relying on ODMs. Most Samsung in-house designed phones lag at updates or don't get updates at all compared to the ODM based devices.

Anyone know if they will be releasing a new version of this with 5G?

Anonymous, 03 Jan 2021Lost faith in Samsung so called rugged phones with the acti... moreI have been searching for a replacement for my S7 Active since 2018. That phone with no case went into fires, took video while underwater at 10 meters during rescue dive training and when either a Samsung or android update finally bricked it and made it to slow to possibly consider using I gave it to my two toddlers as Netflix wifi machines and they still work perfectly (if now mysteriously slowly even after a factory reset). If they would make that exact phone with 2022 computing technology (not retardedly huge like all new phones seem to be) I would happily pay twice the price of the field pro

Features that not in this phone is
1.No One UI
2.Only light theme
3.New icons on Pie
4.Clock style

Anonymous, 01 Jul 2022Dont buy phone with crappynos in it!Samsung is generally decent when it comes to updates. Other XCover-phones get them every month. That does not excuse Samsung's failure at updating the FieldPro, but it is a risk I was aware of when getting such a niche phone. I was more disappointed when my 1st gen iPhone SE ran into iOS fragmentation after just two years, with several apps not being compatible - a failure mostly to blame on the 3rd party devs, but I had kinda hoped Apple would enforce some discipline in that regard. Now I think the iPhone Mini can expect similar issues soon.

Zakalwe, 31 Mar 2022Ah, what I meant is, Samsung seems to have more or less aba... moreDont buy phone with crappynos in it!

Mark_S, 06 Apr 2020Android Oreo. Can do things with it that have been restrict... moreCan you elaborate? What can you do on Oreo that you can't do on Pie? I've seen some threads talking about different things like call recording no longer works on 9, but there has to be more, much more to it than that for your comment?

AnonD-959019, 30 Mar 2022If you want, you can go to the settings, scroll to the &quo... moreAh, what I meant is, Samsung seems to have more or less abandoned the FieldPro. Mine has not received any update since July 2021 (https://doc.samsungmobile.com/SM-G889YB/DBT/doc.html) despite supposedly being on a monthly schedule. To get my Galaxy Buds to sync with the phone I had to copy some APKs manually from another phone as Samsung's server would not recognize the FieldPro when it was trying to download the drivers. I talked to Samsung's support, they escalated to some engineers but eventually gave up - they seemed largely uninformed about the FieldPro.

It is a shame in that it is/was decent hardware. But it was released after the regular XCover Pro, which cost less than half, has been available everywhere, gets monthly updates to this day, has plenty of third-party accessories, and is arguably a more modern and practical device. I doubt they sold more than a handful of FieldPros against this internal competition.

Zakalwe, 27 Mar 2022I think it varies even between regional versions. The phone... moreIf you want, you can go to the settings, scroll to the "software update" and go to the "last update" section ... from there click the link below😃

Zakalwe, 27 Mar 2022I think it varies even between regional versions. The phone... moreThank you very much...😃

AnonD-959019, 24 Mar 2022For this phone which was the first OS with UI and which was... moreI think it varies even between regional versions. The phone I have is the SM-G889YB/DS, bought in Germany, and it currently has Android 10 and One UI 2.5. The American SM-G889A on the other hand seems to remain on Android 9. But it is hard to find comprehensive information. Samsung does not provide much support for this phone, I'm afraid.

Doug, 14 Dec 2021AT&T *Sells a charger that chargers a 'spare'... more"Hot-swapping" usually means you can replace the battery without turning the device off. Basically the device needs two batteries for this - one stays in to keep the device running. This is very rare in a phone; the only one I can think of was the Panasonic FZ-X1 which had a small internal battery or capacitor that could power the phone for a few minutes while you replaced the main battery.

The FieldPro just has a replaceable battery: You turn the phone off, take out the battery and put in the fresh spare battery, and turn it on again. That is great and useful, but it is not hot-swapping, as you are forced to reboot the phone. The previous poster (XCFieldArena) wanted proper hot-swapping, and the FieldPro does not have that. But from what I can tell there has never been any official claim that the FieldPro can hot-swap.

(Also, minor detail, but the charger you linked is for the XCover Pro, not the XCover FieldPro. There are similar chargers for the FieldPro, though, and it even comes with one.)

Zakalwe, 27 Nov 2021To be honest, I have never seen Samsung or AT&T claim h... moreAT&T *Sells a charger that chargers a 'spare' battery*.


What is that, if not "supporting hot-swapping"?