A new update has started rolling out to the Samsung Gear S3. Weighing in at around 13.6MB, the update arrives as version R770XXU2CRE3 and R760XXU2CRE3 for the frontier and classic variants, respectively.

The main new feature is the option to answer calls by rotating the bezel. 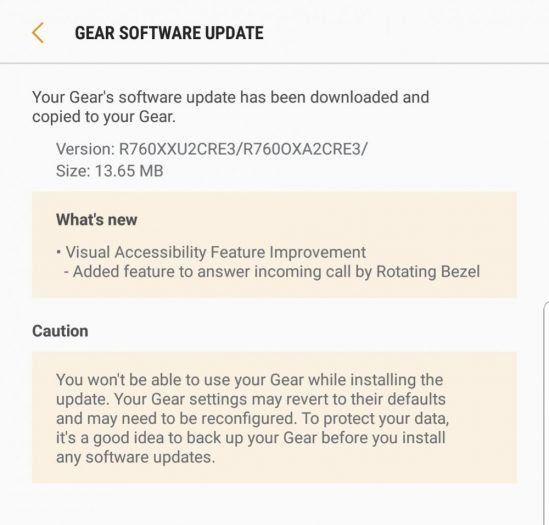 The feature is enabled by default, and you need to rotate (clockwise) the bezel twice in order to accept a call. Also, early adopters say it has been already available in some regions for a while now.

Samsung brings Tizen 3.0 to the Gear S3 with a Value Pack update

This update did not change anything in picking up phone calls. It worked by turning bezel since I bought the watch in January 2017. It has ruined my gear S3 watch battery instead. Or switched on something that I cant figure what it is. It used to las...

The new update stuffed up the battery life on my s3 frontier!? Now doesn't last even a day? Samsung changed the battery for me, but it did not make any difference. Had the same problem with earlier update?

Guess this was region locked earlier. Europe version had it since launch. At leas mine :)