The Samsung I5700 lacks the cool 3D view that we saw in the Nexus One but it offers two options for the image thumbnails. You can either go for 24 small image thumbnails or 12 larger ones.

The gallery supports gesture controls like scrolling images or finger panning so you can alternate images without having to return to the default view. Just swipe to the left or to the right when looking at a photo in fullscreen mode and the previous/next image will appear.

There isn’t pinch-zooming but the one-finger zoom more than makes up for it. There is also double tap zooming if that’s what you prefer.

Once again, we notice the strange bug of the Android galleries that fails them to properly zoom images to 100%. When zoomed, the Android handsets only load downsampled and heavily compressed versions of the images (to improve speed we guess) that can make you think your photos lack detail when you view them on the handset.

On the positive side, there are two important upgrades brought by the new OS version. You have the multiple marking that allows mass cut/copy/delete and Bluetooth file transfers from the gallery. There is also the handy option to upload images directly to Facebook and Picasa or send them by MMS or email.

Sharing a file from your gallery is easier than ever before

Video player does the DivX/XviD thing

The Samsung I5700 Galaxy Spica is among the best performers in the Android family as far as video playback is concerned. In addition to packing a dedicated video player app (though playing videos through the gallery is still possible) it also has DivX and XviD video support, which is very rare in the Google OS family.

Performance with higher-res videos is really good, the Galaxy Spica handling VGA videos at 30 fps with little to no issues. 720p crosses the line but having such videos on your handset is pretty unlikely anyway.

The interface of the video player itself is as simple and as it could possibly be. You get a list of all videos available on the phone and the controls while playing a video boil down to play/pause and skip buttons, as well as a draggable progress bar.

The TouchWiz UI has reskinned the music player on the Samsung I5700 Galaxy Spica. The interface consists of several tabs for the sorting options: current playlist, all tracks, playlists and albums, artists and composers. You are free to remove those you don’t need, to make the interface easier to navigate.

In addition, Samsung have made the Galaxy Spica the first Android to feature equalizer presets. The great feature that allows you to quickly look up a song in YouTube or through Google search is also here.

Equalizers presets are debuting on Android with the Spica

Now the handset also prompts you to select whether to look up the artist, the song title or the album. What's even better, the YouTube search results are loaded straight into the YouTube client.

And with the added eye-candy things are almost as good as they can get now.

The Samsung I5700 Galaxy Spica is not only pretty loud with headphones connected but also capable of providing high quality audio output.

The cut-off extreme bass frequencies and the higher-than-average intermodulation distortion are its only shortcomings but none of them is too bad actually. And the rest of the readings are just great and comparable to the best in class.

Here comes the table so you can see for yourselves. 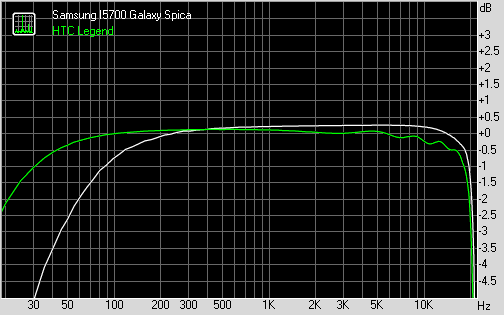 Please tell me how to unlock the gt15700 say

just want to know where & how can I upgrade this phone to vision 2.1 .I have 1yr using this phone but bluetooth is not working course of its vision 1.5 .I will appreciate ur help