Samsung has been beta testing Android 10 on the Galaxy Note9 for over a month now and the latest patch is here to iron out a single bug ahead of the stable release which is scheduled for January. 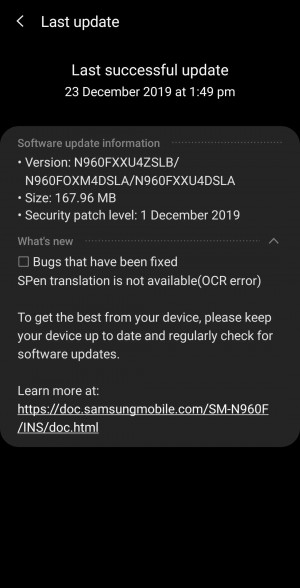 The new firmware bears the N960FXXU4ZSLB build number and weighs in at just over 167MB. Its only fix comes with a reported S Pen translation bug.

The security patch meanwhile is already on December since the previous release. Given the small changelog, we can expect the full-blown One UI 2.0 update to come soon enough as the beta testing period is coming to a close.

That they definitely will, to make sure it slows down or starts lagging or hanging well enough to compel the Note 9 users to buy 10 series or upcoming 11 series.

waiting For this Update