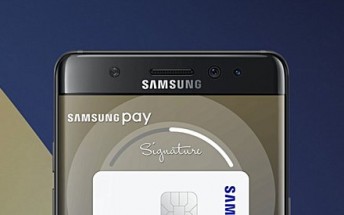 Samsung Pay was expected to launch in South Africa last year alongside the company's Galaxy Note8 smartphone. However, for reasons unknown, that didn't happen. The good news is now the company has confirmed the mobile payments service will be available in the region in a couple of months.

The confirmation came from Samsung Electronics Africa CEO Sung Yoon, who said Samsung Pay will be launching in South Africa around the month of June this year.

There's even a dedicated Samsung Pay page on the company's South Africa website, saying the service is coming soon.

Samsung Pay has been expanding around the world at a good speed. Last we heard, the service launched in Italy. Just recently, PayPal also started rolling out Samsung Pay support to users of its service.

As a dev and tech savy South African citizen. this is great news :D

Samsung Pay has been expanding around the world at a good speed ---- is this statement ironic?

It was a response to the first comment - appears that the original text was not quoted.