Samsung has started pushing out yet another Nougat beta update to eligible Galaxy S7 and S7 edge units, making it the fourth update that the tech giant has rolled out as part of its Galaxy beta program.

According to the official changelog, it's largely a bug fixing and performance-centric update. It also does away with the Samsung Note app. 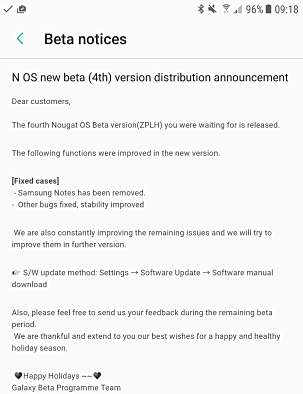 The Note app, in case you don't already know, now officially supports Nougat, meaning you can download it from the Galaxy Apps store or Google Play and there's no need for it to be part of your core build.

Moving on, reports say the improvements included in the update (which weighs in at 280 MB) are mostly related to gaming and browsing. And finally, there's no longer the mention of Samsung Experience in the About device section of the phone.

There is a difference between Chinese OEMs manufacturing phones in China and American/Japanese/Korean OEMs getting their phones manufactured from China. The difference of quality is evident.

samsung has alot of features in its phone that other phones does not have, have you seen the Samsung theme store? No other phone company offers that much customization. So it makes sense that it will take longer to update and to make sure it's bug fr...

Is this beta 4 or 5, I’m on 4 now, but everywhere is calling 5 a 4. Haven’t recieved the new update yet, tmobile united states