Music player has what it takes, DNSe too

The Samsung S5260 Star II is a very capable music player. You can filter tracks by author, album, and genre. Automatic playlists (recently added, most played etc.) are also generated but you can create your own playlists too.

The music player can naturally be minimized to play in the background and you can control it from the notification area or the lock screen.

The music player is up to scratch

The S5260 Star II offers the standard equalizer presets: pop, jazz, classic, as well as stereo widening, dynamic and surround effects. You can’t create custom equalizers, but with such a wide selection of presets you really won’t need to.

The Find music service is a tap away and can be used to identify tracks playing around you by sampling chunks and looking them up online. The Find similar option looks for songs similar to the one you’re currently listening to.

Radio has RDS, can record your favorite tracks

The Samsung S5260 Star features an FM radio with RDS. There's an option to record radio broadcasts as well, which can be a cheap way to get individual tracks or whole music sets off the radio.

Of course we also subjected the Star II to our traditional audio quality test. It turned out a decent performer, which is probably more than you would expect from a handset in this price range.

The handset is on the quiet side when plugged into an active external amplifier, but its output is pretty clean. There is a little stereocrostalk, but we guess most of you will be able to live with it. 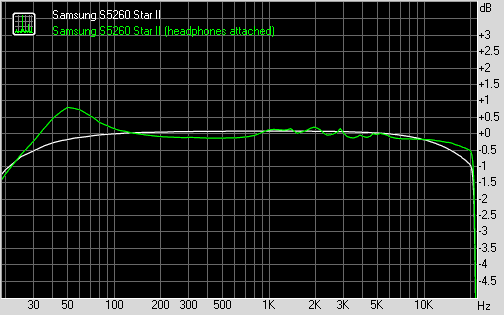 The video player is very limited in terms of codec support – only MP4 and 3GP are supported. It has some cool features like the 5.1 channel audio (simulated of course and works with headphones only) and mosaic search.

There’s an option to stretch the video so that it fills the whole screen, which is mostly useless since it distorts the picture. At least there’s brightness control in the menu.

The video player has cool features but poor codec support

The mosaic search takes a number of screenshots, about 30 seconds apart, to help you find the scene you’re looking for – tap on the thumbnail and playback will resume from that point on.

It was my first phone, basic, small and sleek, loved to charge it once every two days. Got it almost new from my mom, she was very careful with it, nice touch screen, with that camera the photos were not that bad on daylight time, I managed myself to...

My sister is using SG 5260 now it is requesting for a pin no when it is switched on pls how do I go about it even if it is to hard boot it thanks in advance.