Samsung has for years had a luxurious line-up for the Chinese smartphone market under the W line. It used to launch exclusive (and ultra-expensive) clamshell phones with Android until the Fold series came to life and now it's more of an exercise in rebranding. The company has confirmed that it's about to welcome a new member along those lines - the Samsung W21 5G.

The new phone is scheduled to arrive on November 4 but initial reports and listings reveal that it will be identical to the Galaxy Z Fold2 5G. 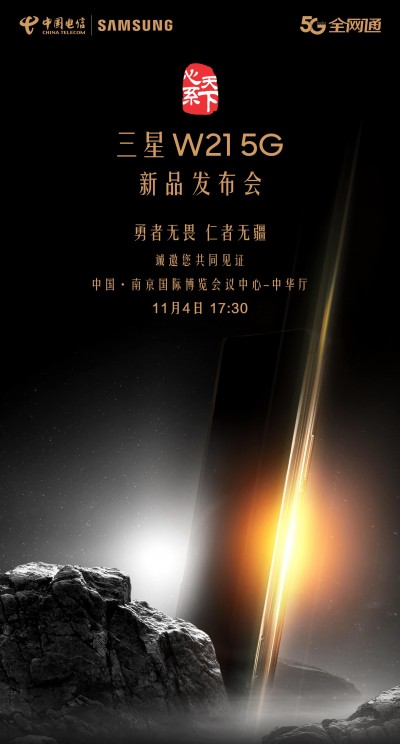 The only major difference between the W21 5G and the Galaxy Z Fold2 5G is likely to be the color of the hinge and the back panel - the phone appeared in Gold on TENAA. The listing also revealed a China Telecom logo on the back, meaning it will likely be exclusive to that carrier.

Here’s where it gets interesting - Samsung China offers both the Galaxy Fold and the W20 5G, with the exquisite version coming in Silver color, brings 5G connectivity and gets the Galaxy Buds in the retail box. That makes the price go from CNY15,999 to CNY18,999 currently.

The Galaxy Z Fold2 5G is currently selling for CNY16,999, so a similar hike will give us a price tag of at least CNY19,999 for the luxurious version. However, differences in retail package can bring a change to that so we'll have to wait until next week to find out.

I don't understand the reason for making W21 similar to the Galaxy Fold, a form factor that is already present in China as the article mentioned, but also failed big time in the international market. Samsung's W series is notable for reinve...

As you can read by yourself, it's only for the Chinese market.

Why? What would YOU name it?