Sony is holding an online event later today to give us our first look at the PlayStation 5 games. The company has already revealed the PlayStation 5's specs but hasn't announced its price yet. However, the gaming console was listed on Amazon UK with a price tag of £599.99 ($760/€670), and while most of the listing is obviously a placeholder, the price is too specific for it to be random.

What gives it even more credibility is that the listing was pulled down since. Some watchful shoppers took these screenshots that show the PlayStation 5 will come with 2TB storage and someone even managed to place an order.

Interestingly, the 1TB and 2TB models had the same price, which obviously won't be the case when sales proper start. We suspect Amazon only had the starting price and mistakenly added it to both listings. 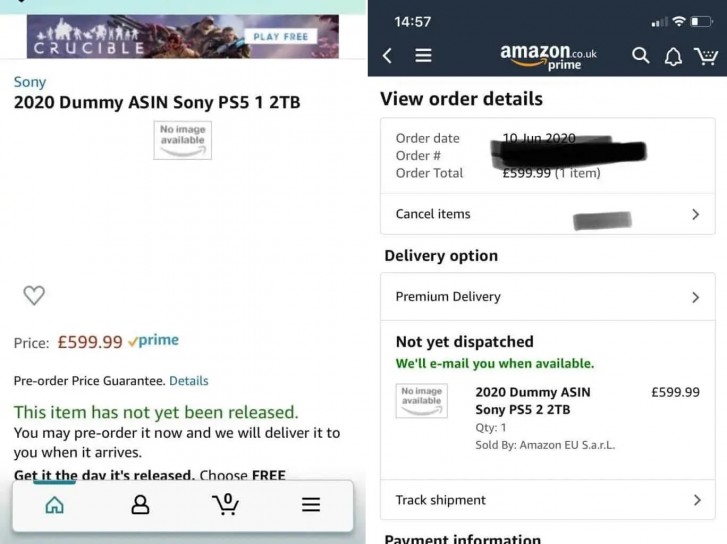 Previously Sony confirmed that PlayStation 5 will come with 825GB storage, but the company was likely referring to the actual usable storage.

Additionally, Amazon UK had listed the PlayStation 5 games from a few developers priced at up to £69.99 ($90/€80), but these were also placeholders which didn't include any information about the games.

Sony's PlayStation 5 event will be streamed starting at 8PM UTC where we'll hopefully get more details about the gaming console's pricing and availability.

Insiders: Sony will produce only a limited number of PlayStation 5 consoles at launch

Never met any hacker as discreet and fast like this White Collar Hackers. They are called WhiteHats and they has helped me in multiple ways first was when my ex spouse cheated on me- they got me every information from my spouse phone number and now t...

I want to use this medium in appreciating Webroot hacker, after being ripped off my money, he helped me find my cheating lover he helped me hack her WhatApp, Gmail and Kik and I got to know that she was actually cheating on me, in less than 24 hours ...

But you guys have pretty cheap broadband rates, right?