The Xperia 10 Plus packs a 21:9 aspect display and it's one of the first phones with such extreme screen proportions - others have peaked at 19.5:9 and usually have at least some type of notch. Not the Xperia - the rectangular 6.5-inch LCD panel only has slightly rounded corners. 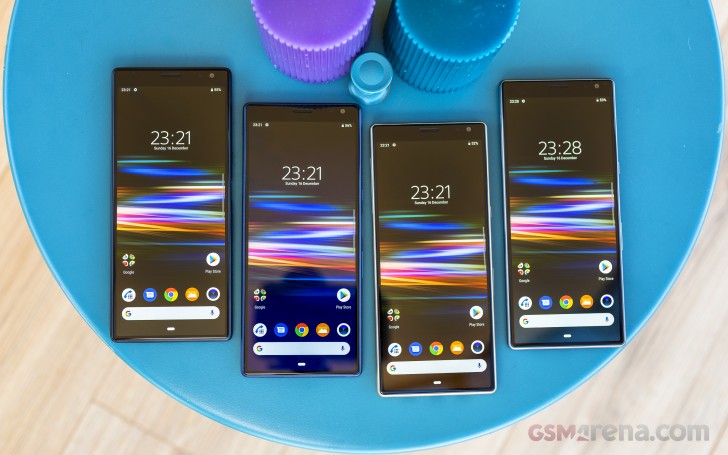 Anyway, back to the 10 Plus. In our testing, the phone posted a maximum brightness a little short of 600nits with the slider all the way to the right and we didn't see a boost with Adaptive brightness enabled. A fairly typical illumination of the blacks below 0.4nits means a good contrast a little over 1500:1. It's no OLED, but it's not a bad LCD either.

Minimum brightness is 5.9nits, so while it doesn't go as low as 2nits like some others do, it's still perfectly acceptable for use in very dark environments without poking your eyes out.

There are two tiers of color settings - 'Color gamut and contrast' and 'White balance'. The first one lets you choose between Standard and Super-vivid modes of color enhancement as well as letting you keep the enhancements off. 'White balance' then lets you choose between Warm, Standard, and Cool color temperatures or you can dial in your own RGB values with the sliders.

While none of the modes makes any claims for accuracy, we sort of expected 'Off' to be the 'sRGB mode'. Well, it's not - we got an average DeltaE of 6.1 and a maximum of 10.8 with whites heavily shifted towards blue. The out-of-the-box Standard setting gave us an average DeltaE of 6.6 and a maximum of 12.4, while in Super-vivid those values were 6.8 and 13.5 when comparing against multiple patterns from the sRGB color space. We tried the image enhancement modes against AdobeRGB and DCI-P3 targets but there was no match. Setting the White balance to 'Warm' didn't dramatically improve things, while 'Cool', predictably, was very blue.

The closest we got to a faithful representation of the sRGB color space was with the 'Color gamut and contrast' set to Off, and the RGB sliders at R255, G73, B0, but even that only got us an average DeltaE of 4.0 and a maximum of 8.0. There was a slight improvement in the whites too, but they remained distinctly bluish.

There's a 3,000mAh battery inside the Xperia 10 Plus, a fairly small capacity for a recent phone with a screen this large. The Redmi Notes 6 and 7 have their usual 4,000mAh at their disposal and that's as much as the vivo V15 and Oppo F11 Pro have as well. The Galaxy A9 (2018), meanwhile, packs 3,800mAh worth of juice. Then again, the Moto G7 Plus has the same 3,000mAh capacity battery as the Xperia.

For what it's got under the hood, the Xperia 10 Plus does a very good job. We clocked 21 hours on a 3G voice call, ten and a half hours of surfing the web over Wi-Fi, and an hour more of looping videos offline. Adding in the standby draw, we arrived at an overall Endurance rating of 78 hours. Imagine what could have been done with some extra capacity.

Our battery tests were automated thanks to SmartViser, using its viSer App. The endurance rating above denotes how long a single battery charge will last you if you use the Sony Xperia 10 Plus for an hour each of telephony, web browsing, and video playback daily. We've established this usage pattern so that our battery results are comparable across devices in the most common day-to-day tasks. The battery testing procedure is described in detail in case you're interested in the nitty-gritty. You can check out our complete battery test table, where you can see how all of the smartphones we've tested will compare under your own typical use.

Fully charging the Xperia with the adapter we got bundled (5V/1.5A) took a less-sluggish-than-expected 2:12 hours and 30 minutes into it the battery indicator read 31%. We tested with an 18W Power Delivery charger (a Pixel one) and got a slightly better 40% at the half-hour mark and 1:50h for a full charge from flat - we gather those are the numbers you can expect if using the Sony 18W PD charger, should you happen to get one in the box or buy it separately.

The Xperia 10 Plus has a single loudspeaker down on the bottom - don't be fooled by the two grilles, the left one is just for the microphone, and the earpiece is just... an earpiece. There is no stereo setup here. 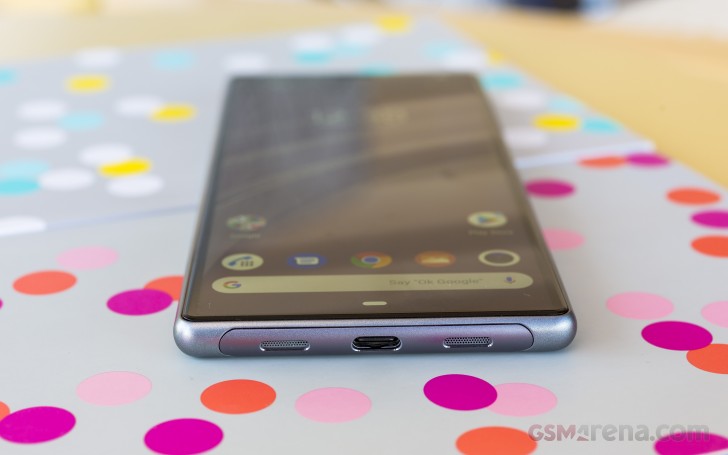 Having said that, the phone can be plenty loud - it scored an 'Excellent' mark in our loudspeaker loudness test. And while it does remain distortion-free at max volume, it's severely lacking in low-frequency reproduction - forget about the bass on the 10 Plus.

The Sony Xperia 10 Plus delivered audio of excellent clarity with an active external amplifier with all of its readings as good as we’ve come to expect from smartphones these days. Degradation with headphones was rather minimal too - the spike in stereo crosstalk was about average, but none of the other readings were affected.

However, we found the Xperia 10 Plus lacking when it comes to maximum loudness - the phone was below average on both occasions, suggesting that it might have trouble driving high-impedance headphones to sufficient volume.

Samsung A50 or A70 at the same android Pie and UFS and better chipset plus Oled, also Oppo Reno and Realme also offers similar like samsung at the lower cost than sony, Many OEM offers more interesting features than Sony at the similar premium price

do you still have that water proof sony

Can you tell me which cell is better than Xperia 10 plus and with more fixtures, thanks