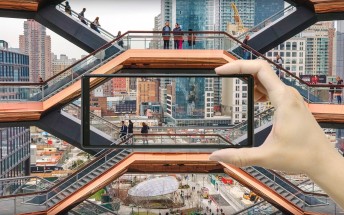 The Xperia 1 will be Sonys first triple camera phone when it launches next month. A short-but-sweet promo video shows what those three cameras can do.

The main shooter has a 26mm f/1.6 lens, but you can capture more of the scene with the ultra wide 16mm lens or zoom in with the 52mm tele lens. Sony took the phone to the Vessel at Hudson Yards to show what it can do. The crazy Escherian staircases are great at highlighting the differences between the three focal lengths.

The Sony Xperia 1 will premiere in Taiwan on April 26

Netflix, Amazon and Google Play have 21:9 movies you can watch on Xperia 1 and 10

Hey Shui8 specs on paper don't mean jack shit ! What really matters is to have the actual phone in hand to do a proper evaluation. For example the camera. Again you can't do that let alone do a true camera comparison if the phones not out yet which t...

: What's ironic is your comment ! The Xperia 1 isn't even out yet (for any type of proper camera review) but you state Huawei's better ! Now that's truly ironic and dumb too !!!