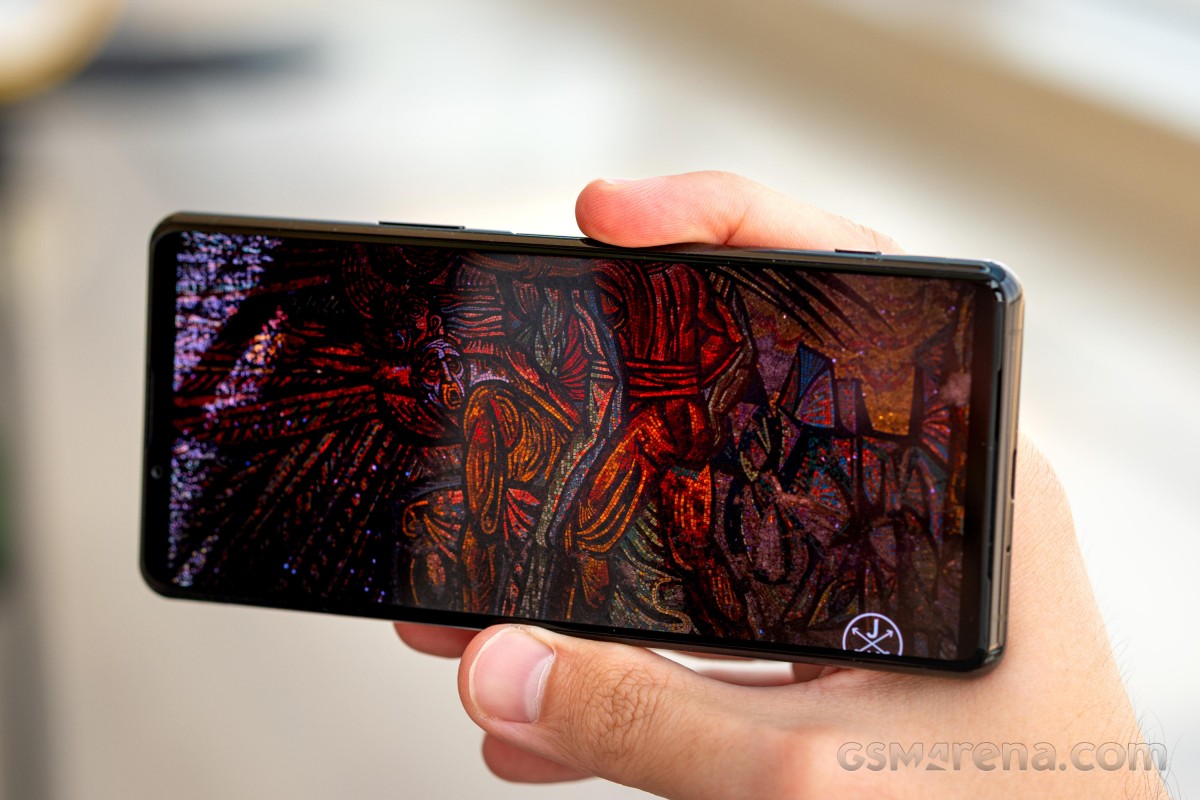 The 4K resolution remains reserved for the 1 series, and that's perfectly understandable. The 449ppi pixel density on the 5 III is easily excellent - it's more or less the same as on the Zenfone 8 (446ppi) and slightly higher than the Galaxy S21 5G (421ppi), while the iPhone 12 Pro has a handful of extra pixels making for a 460ppi number.

Where the Xperia can't quite compete with those is maximum brightness. The highest number we squeezed out of it was 590nits, which is the value you can get while in Creator mode and in select whitelisted apps like Google Photos or web browsers. It's a bit lower than last year's model, and a couple dozen nits lower still than the Xperia 1 III, but 590 is really about as good as 620.

A convoluted logic will determine the maximum brightness you'll be able to get at any given moment, and that depends on image quality mode (Creator/Standard and then some sub-settings), the app being used, and the available ambient light (if you have the Adaptive brightness enabled). It's not inconceivable that there are other variables as well.

We already mentioned the two main color modes and they are the same as they've been on Sonys for several years. Creator and Standard modes can be found under the 'Image quality' menu item in the display settings, while further 'White balance' adjustment options get their own menu and include Warm/Medium/Cool presets, as well as RGB sliders for extra granular tweaking.

In Creator mode, we were able to get excellent accuracy for our sRGB test swatches by switching to the D61 setting for white point - the average dE2000 was 0.8. The Warm preset was almost as accurate - average dE2000 of 1.2. The default white balance setting when in Creator mode was Medium, and that had a purple tint as well as colors that were more off-target than the custom presets.

Standard mode, again with the white point set to the D61 position, gave us an average dE2000 of 2.2, and that's not too shabby.

The out-of-the-box setting is Standard mode with the white balance set to Cool, and that's got a very noticeable blue shift.

Naturally, the display of the Xperia 5 III is HDR capable, and we got HDR streams from popular sources like Netflix, Amazon Prime Video, and YouTube.

Sony's refresh rate handling is unified across all (three) phones that have 120Hz screens, and on the Xperia 5 III, we observed the same behavior as on the 1 III and last year's 5 II. A single toggle in settings enables the 120Hz mode, and you'd be getting that refresh rate pretty much across the board with little to no activity-based or app-based switching. Notable exceptions include the camera viewfinder and Google Maps that force 60Hz mode, as does video playback in Google Photos (but not in the streaming video platforms mentioned above). Such a non-adaptive approach is a bit behind competing implementations and potentially more taxing on the battery, though the savings achieved with the adaptive alternatives on competing phones are hard to quantify.

As for games, from the Game Enhancer utility settings, you can switch the refresh rate for the display to 120Hz for titles that can go above 60fps - it's at 60Hz by default. You can also force it to 120Hz regardless of whether you know for a fact that the game itself supports a higher frame rate - just to be sure. That's done on a per-game basis and is buried several levels in the Game Enhancer, so it's not the most intuitive implementation, but the option is available.

The Xperia 5 III is powered by a 4,500mAh battery, the same capacity as the Xperia 1 III, which is always good news for a phone with a smaller (and lower-res) display.

On top of that, the 5 Mark 3 gets a 500mAh increase over the 5 Mark 2's capacity, which was already quite the marathon runner. Comparisons outside the Xperia lineup paint a nice picture for the 5 III as well - key rivals like the Galaxy S21 and the Zenfone 8 come with smaller 4,000mAh cells.

Indeed, the Xperia 5 III doesn't disappoint. We clocked nearly 22 hours in our standard offline video playback test (run at 60Hz refresh rate) and 12:37h in the Wi-Fi web browsing test (that one at 120Hz). Neither the Galaxy S21 5G, nor the Zenfone 8 can match the video playback endurance, while in web browsing, the Xperia is tied with the Zenfone, the Galaxy behind them by over an hour.

On a voice call, the Xperia 5 III was good for 24 hours - a couple more than the Zenfone, but 3+ hours short of what we got on the Galaxy. Standby battery draw was average in the grand scheme of things but good for the latest top-tier Snapdragon.

Ultimately, the Xperia 5 III posted an Endurance rating of 100h. 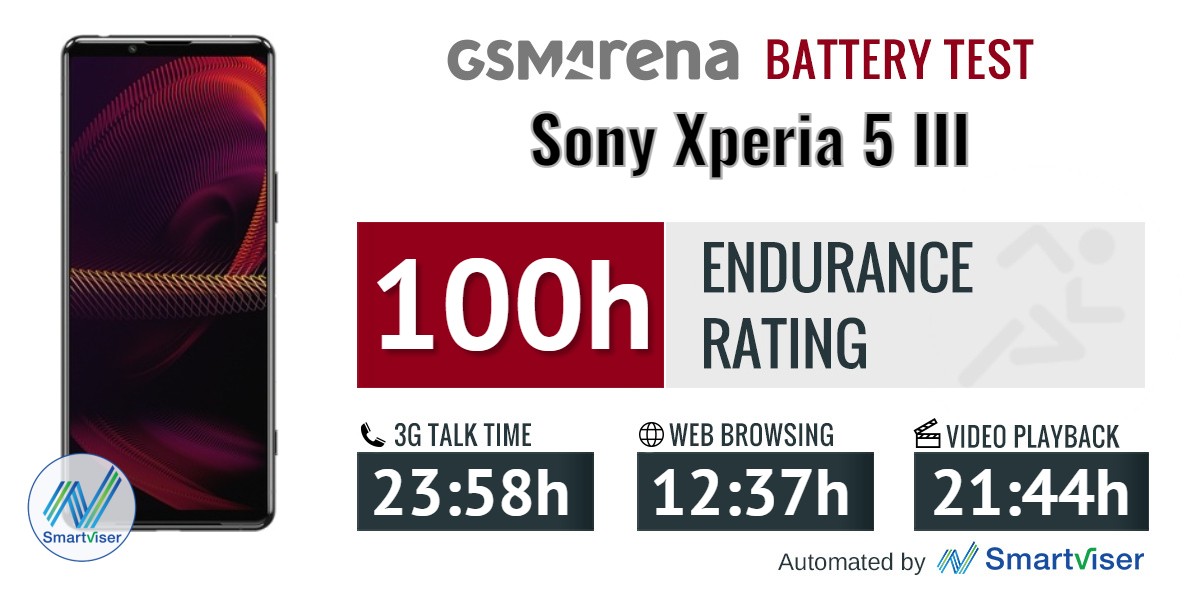 The Xperia 5 III ships with the company's 30W USB PowerDelivery adapter, the same one we got with the Xperia 1 III. The 5 III showed 49% in the battery indicator at the 30-minute mark, and a charge to 100% took 1:50h - virtually the same results we got out of the Xperia 1 III. 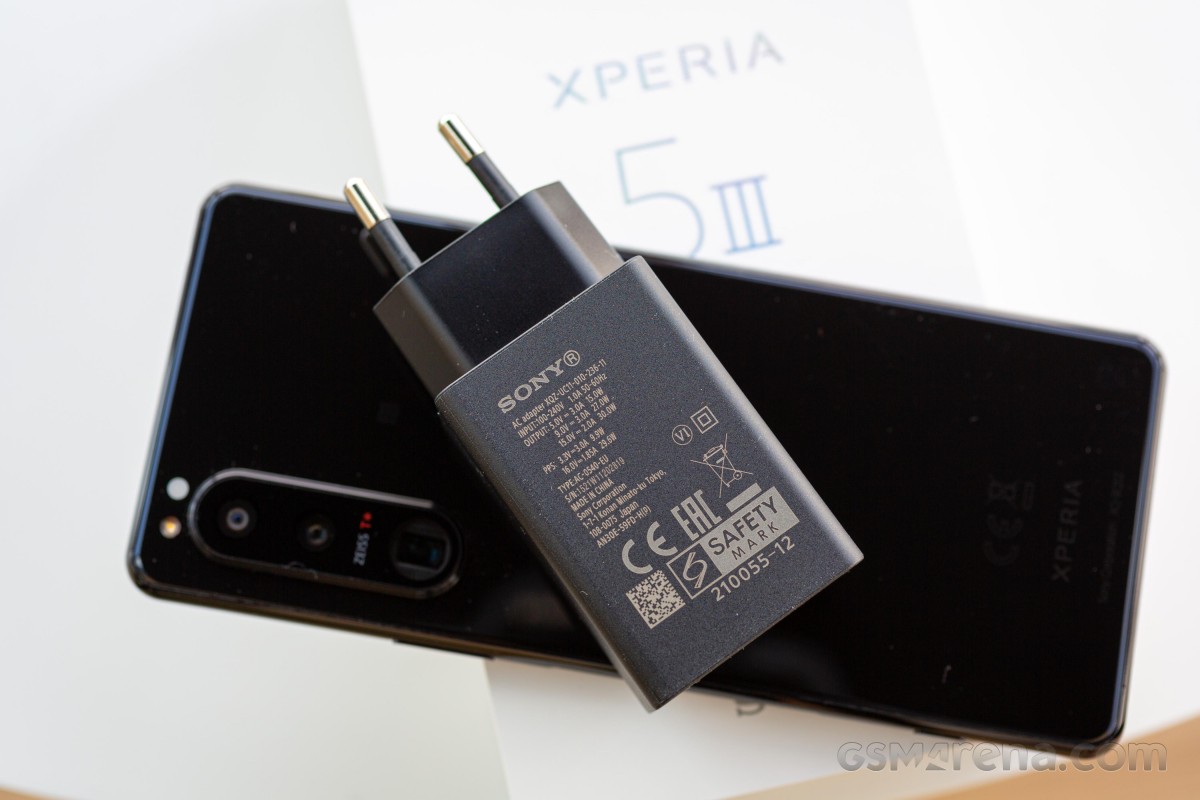 Sony has always insisted on preserving battery health in the long run - they mention your Xperia 5 III's battery will remain healthy even after 3 years of use, so the modest results for charging speed aren't remotely surprising. However, if you prioritize speed over long-term capacity preservation, you'd clash with the Xperia 5 III's charging practices.

Unlike the 1 III, the Xperia 5 III does not support wireless charging. Neither does the Zenfone 8, but the Galaxy S21 and the iPhone 12 (Pro) do, so there are alternatives if the feature is important to you.

The Xperia 5 III uses the classic Sony speaker setup with symmetrical drivers top and bottom, both firing forward, with the top one also serving earpiece duty. Another Sony peculiarity is that the earpiece is always the left channel in the stereo pair, and the phone won't switch channels if you're holding the phone in landscape the other way around - the location of the hardware buttons defines a correct way up.

The Xperia posted a Good score for loudness in our test, the same as the bigger 1 III - and with a nearly identical numerical result, too. Compact competitors like the Galaxy S21 5G and the Asus Zenfone 8 are in the same loudness ballpark, though the iPhone 12 Pro is measurably louder.

Potential rivals pack more punch in the low end, where the Xperia 5 III lacks presence. The Zenfone, in particular, outshines the 5 III when it comes to bass, and the iPhone is boomier too. Vocals out of the Sony do sound nice and clear.

If you want an amazing pocket camera, this is the one. If you want a faster CPU and better battery life try 5IV, if you want top battery life for a fast and good camera coupled device 10IV. Xperia is trully LIKE.NO.OTHER!

Not sure about this device. I'm a heavy user. Internet sharing for laptop, movies, music, navigation, camera, etc. Using like for a 8 months. And this is my personal experience. A) GSM data connectivity is weird. Stick to the st...

Have you thought of the Zenfone 9? Due to come out soon