The BRAVIA engine enhances contrast and colors by sharpening the image and reducing noise. These steps would normally lead to artifacts, but you'll have to look from really up close to notice. You can switch BRAVIA off, but we recommend keeping it on - it really improves the image quality.

There is no dedicated video player app on the Xperia P as in most of the droids out there. DivX, XviD and MKV videos are supported but the Xperia P has a rather selective filtering and not all videos got through.

The Xperia P managed to play every MP4 file we threw at it, even the 1080p videos. Most of the high-res DivX/XviD/MKV files did run too. Unfortunately, the Xperia P has rather patchy audio codec support, most notably AC-3 is not on the list. So, some videos played without audio and some with unsupported bitrate didn't pass at all.

There is no subtitle support and there is no way you can see video information (file name, codec, size, etc.).

Watching a video on the Xperia P

The Xperia P has the same music player that we liked on the Xperia S. You're welcomed to a Cover Flow-like interface and you can swipe left and right to skip tracks (complete with a smooth 3D effect).

This is the Playing tab, the second tab available is called My Music and it's where your music library is organized. Tracks are sorted by album, artist, playlist, all tracks, SensMe channel, favorites. There's also a link to Sony's Music Unlimited service.

Audiophiles will appreciate the rich selection of equalizer presets. There's a custom preset too - it lets you adjust five frequency bands and there's a Clear Bass slider too.

The More tab offers a Headphone surround option, which can be set to Studio, Club or Concert hall. If you're not using the headphones, you can turn the xLOUD feature on, which optimizes the sound for the Xperia P loudspeaker.

A new feature is the track info and playback controls available on the lockscreen, which let you control the player without having to unlock the phone. The music controls replace the clock, which might be annoying if you just want to check the time. Still, the clock slides out of view, so you have about a second to see what time it is (or just look at the small clock in the upper right corner).

Music player controls on the lockscreen

The Sony Xperia P is equipped with an FM radio, which has a really neat and simple interface. It automatically scans the area for the available stations and places "notches" on the frequency dial for easier scrolling to the next station. There's a Force mono option to use in case of poor reception.

The Sony Xperia P performed identically to its Xperia S sibling in the active external amplifier part of our test. The smartphone got excellent scores all over the field and had above average loudness, which adds up to a great performance.

What's even more impressive is that when headphones come into play the Xperia P is actually slightly better than its more expensive sibling. Granted, the results are so similar that it's almost certain that the audio chips inside the two are identical, but the P takes the narrow win here. The stereo crosstalk rises by a somewhat smaller margin and a tad less distortion creeps in. Volume on the P, just as on S are about average. 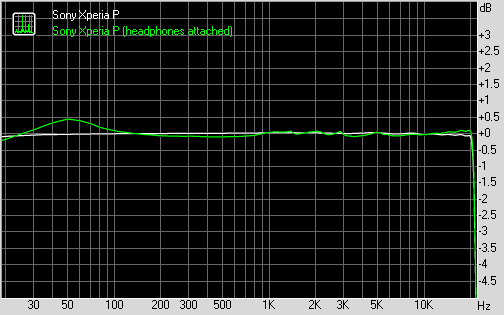