Album is your gallery

The Sony Xperia T3 comes with the custom Sony gallery, called Album. Images are organized into groups of thumbnails and sorted by date. You can change the thumbnails size by pinching.

Unlike previous versions there isn't a homepage that hosts all of your albums, instead you get the same swipe-able menu the app drawer is offering. There you can find all of your online and offline albums.

Unfortunately, this doesn't work very well for downloaded TV shows - it doesn't recognize the S01E02 naming convention and won't pull info about individual episodes. It gets worse, Gracenote seems to be lacking info on TV shows in general, we couldn't find even popular shows like The Big Bang Theory.

Unfortunately, there is more bad news - the video player does plays 1080p files hassle-free but the supported codecs are limited to Xvid, MP4 and MKV files. DTS and AC3 audio tracks are not supported, which makes the MKV compatibility pretty much obsolete. We know you can always get a proper video player app from the Play Store but it's a shame you can't just use the eye-candy default player for everything.

On the positive side the video player supports subtitles, and you can customize their looks. Unfortunately, you cannot manually pick the subtitle file, it has to reside in the video folder to load up.

The Sony Xperia T3 features an FM Radio with RDS. The app features multiple visualizations and integrates with TrackID to recognize the currently playing song. You can even directly send an "I'm listening to..." post to Facebook.

The Sony Xperia T3 did fairly well in our audio quality test, demonstrating clean output in the two test scenarios.

As usual we did the first test with the smartphone connected to an active external amplifier and it produced some very good scores. The Xperia T3 showed no weak points to its performance, except for the volume which was disappointingly low.

Plugging in a pair of headphones causes a somewhat big spike in the stereo crosstalk and adds some harmonic distortion, but the latter is hard to detect outside lab conditions. The volume levels are once again the only problem with the output, although quiet but clean output are generally considered satisfactory in this price range. 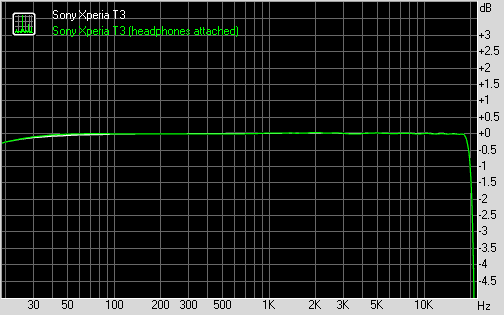 I faced same sim card problem... Then I contacted sony service center they told me to change my sim card to 64k or 128k

Stupid mobile gives me sim detection issues where same sim card was working fine on other mobiles...every time Ive to restart phone by removing sim card...moreover I bought it in Qatar when I go to India Sony center for service they won't do the serv...