Marshmallow with a dash of Xperia

Sony's new X line of smartphones comes with Android 6.0.1 Marshmallow out of the box. As usual, a few proprietary apps and features are baked in as well, but the company's always had a light touch when it comes to modding Android. 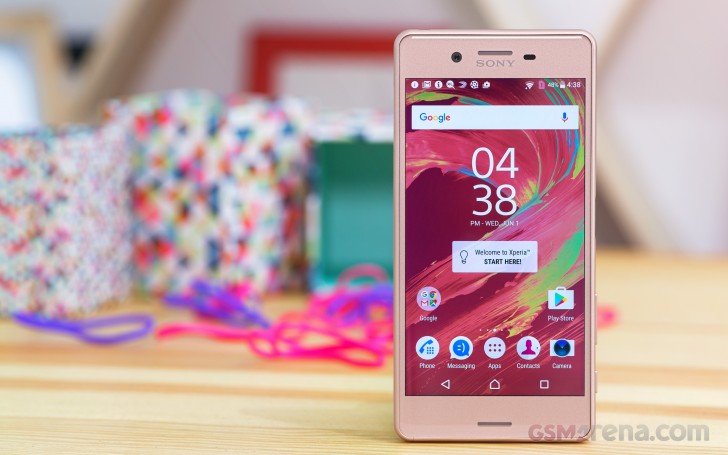 Keep in mind we use "light" in terms of the number of changes it makes, not how much storage it uses up. The X Performance is available with 32GB or 64GB of internal memory of which you're left with either 20GB or 48.6GB. On the positive side, if you need more storage, you can always add a microSD card unlike with many of the phone's competitors.

The fingerprint reader is a recent addition to the Xperia line and Sony firmly believes the best place for it is on the side, integrated into the Power button. We can't deny the convenience, as waking the screen and unlocking the phone are tightly related. It just isn't equally well suited to use with both hands.

Smart Lock gives you conditional security - trusted nearby devices, locations, faces, or voices can allow you to skip the security unlock protocol.

Also, the first feature is in the display settings, the second - in the homescreen settings. While there's clearly a logic behind such an arrangement, perhaps the best logic would be to have the two in one place, maybe?

We had a good experience with the fingerprint reader. It's fast and fairly accurate. There's an animation that slides the lockscreen away from your thumb (as if you pushed it out of the way), which helps hide the small delay, so it feels seamless.

It's the same animation that's played when you unlock with an upward swipe if you're not using any form of lockscreen security - it's a bit disconcerting to swipe up but have the lockscreen fade out to the left. You also can't swipe right to unlock - it's either left or up. We feel Sony could have worked a bit more on the user-friendliness of this interface.

The homescreen appears unchanged. This includes the swipe down gesture, which shows a screen of the apps you use most along with recommendations for new apps to install. A search field is highlighted so you can start typing the app's name immediately.

The traditional app drawer is still on board and it features an above average amount of vendor apps. Sony takes great pride in their AV prowess, so there is now way that they could have gone for the stock multimedia apps made by Google.

Themes are available (both free and paid) that can customize the look and sound of the Xperia X Performance UI.

The notification area is plain Android. You can re-arrange the quick toggle tiles and adjust the screen brightness. Note that just like in vanilla Android, there's no toggle for Auto brightness (you need to go into the settings for that). That's the one thing we don't mind skins changing and still, many manufacturers like to keep it stock.

The app switcher is similarly a vanilla Android affair with the 3D rolodex look. The small apps are gone, however, and there is no longer floating app multitasking.

What there is, is screen pinning, which locks the display on the current app, blocks incoming calls and prevents other apps from retrieving your location. You can think of it as a Toddler mode. To get out of it simply press and hold the back and recent apps keys simultaneously.

So is the app switcher (note: no small apps)  screen pinning

The Smart cleaner feature will periodically empty the cache of apps you haven't used in a while. You can switch this off or just manually tell it not to bother for certain apps.

Smart cleaner frees up memory of both kinds

One thing Android has been missing for years is a proper backup solution and Sony gives you one. It can backup applications, contacts, messages, phone settings. The backup info itself can be stored on your Sony online account, on the microSD card or an external USB device.

Backups can be scheduled, including conditions like "Connected to Wi-Fi" and "Charging device", depending on your preferences.

Scheduled backups are the best way to prevent data loss

Drop your cbrands smartphone more than 10 times and join to compare quality.

wow.. i dont know why google drop me in this page. but my opinion is still unchanged. this phone is such an overpriced failure without any good features. kbrands have far more superior devices with the same price. so shameful.. sony can't even beat...