The Sony Xperia XA retail box is deceptively simple, plain white on the outside with just Xperia's new X logo to catch the eye. When you open it, the sides provide a burst of color, well played, Sony.

The box we got with our review unit held only a microUSB port and a charger (1.5A). Note that Sony packages phones differently based on region (there may even be differences between carriers in the same country). Double-check what's in the box before you buy, if you were hoping for a fast charger or a headset.

The Sony Xperia XA measures 143.6 x 66.8 x 7.9 mm. As we already mentioned, this makes it the narrowest 5" phone in our database. It's light (137.4g) and thin too. The rounded front glass and metal sides flow smoothly and make it feel even thinner.

It's a bit tall for a 5" phone (especially for no hardware keys or stereo speakers), however, that's the dimension that has the least impact on usability. The weight is evenly distributed, so you don't feel like the phone wants to tip over.

Sony has always taken pride in the craftsmanship of its products and the Xperia XA is a strong effort. Yes, it follows the base Xperia design, but its the small tweaks that make it great. 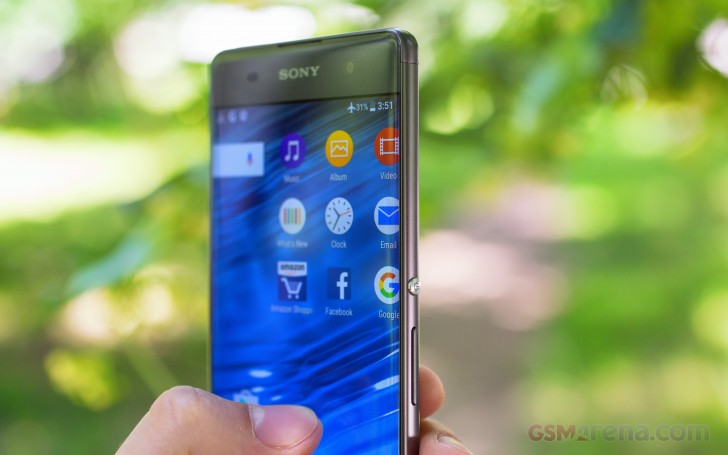 The 2.5D shaped glass, the narrow bezels, the metal frame, the proportions of the thickness and weight come together just right. It's not often that a mid-ranger can make you wish its flagship brother was more like it, but the XA pulls that off on the Xperia X and X performance.

It's a good quality material, soft and smooth to the touch, a bit prone to fingerprints, but flows into the sides just as smoothly as the front glass. And polycarbonate is more durable than glass, so the clumsier among you might actually be better off this way.

The old-school OmniBalance power key on the right is easy to reach with your index finger or thumb depending on which hand you use to hold the phone.

The volume rocker is cramped between the power key and the shutter key. It's reasonably easy to press with the left hand, but reaching it with the thumb of your right hand is a challenge.

Again, there's no fingerprint reader on the power key or anywhere else on the device. If it makes you feel better, US buyers of the Xperia X and X Performance aren't getting a fingerprint reader either. And given that it's a mid-range device we are talking about here we won't be taking away many points for that.

The other side of the Xperia XA is for the card slots, which are hidden under a flap. We have the single-SIM model, which offers spearate slots for a nanoSIM and a microSD card. There's a dual-SIM model too, there the microSD card remains separate.

Both sides have noticeable cuts near the top and the bottom corner. It's not the cuts that bug us, it's that the material clearly changes - the left and right sides are different from the top and bottom sides.

The front has fairly roomy bezels above and below the screen. The top one houses the earpiece, 8MP selfie camera, sensors (proximity, ambient light) and the notification light (small, invisible when off, positioned in the top left corner).

The bottom bezel is barren, though, Sony has reserved stereo speakers for the higher-end X phones.

An 8MP selfie camera, earpiece and sensors above the screen

The loudspeaker on the Xperia XA is actually on the bottom, a grill nestled in the corner next to the mouthpiece and microUSB 2.0 port. The secondary mic for stereo audio and noise cancellation is on top. There you'll also find the 3.5mm audio jack.

Loudspeaker on the bottom • microUSB 2.0 and mic too • 3.5mm audio jack on top

The 13MP camera on the back is put in the upper left corner with a single-LED flash below it. The camera is flush with the back, better still because of the back's curved shape it doesn't quite touch the surface when you leave it on a table.

The polycarbonate back is glued on tight. Don't even try to open it, we'll tell you what's inside - a 2,300mAh battery.

There are four color options available and the hue covers the whole phone - front, sides and back. You can pick from Graphite Black (the one we have), White, Lime Gold and Rose Gold.

It did not have enough space..it can even save up to 5apps

Please help me out with this issue that is troubling my phone, I have updated my phone and now is not more functioning as it's used to be. Please with the previous software