A Sony H4493 has passed through Geekbench, likely the Xperia XA3 or one of its variants (Plus/Ultra). The phone is powered by a Snapdragon 660 chipset, Sony’s first, which should provide a boost in performance compared to the previous generation (the XA2 phones used Snapdragon 630).

We say “should” as the scores posted by this model are not actually an improvement over the older phones. Still, it’s early days and the software may not be ready for prime time (Android 8.0 Oreo).

The Xperia XA3 boasts 6GB of RAM, which was only available on the top Xperia XA2 Plus in the previous generation. A previous leak points to an 18:9 screen with 1,080 x 2,160px resolution, following the lead of the XA2 Plus. 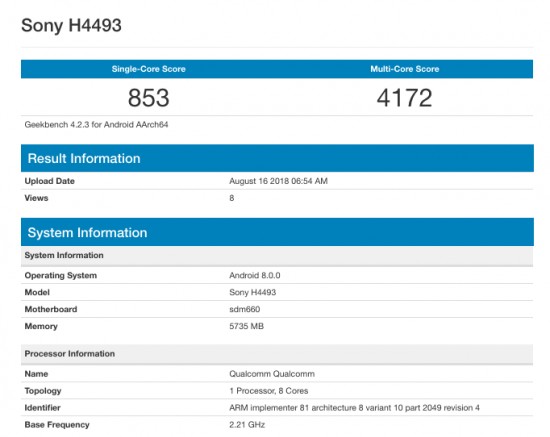 Beautiful Sony cell with little bezels and rounded side edges.