No point really beating about the bush here - Sony is threading pretty boldly into new territory with the Xperia XZ2. So much so, that it can't even stand upright on its own, next to its Xperia predecessors. Joking aside, however, devices like the Xperia XA2 and XA2 Ultra kind of hinted that Sony is looking into a curvier aesthetic, even if they didn't suggest a change as striking as the XZ2 and XZ2 Compact.

And even with all the changes in place, the XZ2 still has a certain Sony aesthetic. Hats off to the design team for that achievement. The Japanese giant has always put great emphasis on its design language and philosophy. This new evolutionary stem is titled "Ambient Flow".

Despite all the differences, under close examination, it isn't really a radically new aesthetic and still keeps some strong ties with the "Loop Surface" and the "Omni Balance" concepts before it.

For one, symmetry is still at the core of the design. In fact, probably now more than ever, with the camera module, additional sensors, flash and the rear-mounted fingerprint reader aligned neatly along the central axis of the curved back.

The attention to durability is also intact, with Sony going through the effort of certifying the Xperia XZ2 against both the IP65 and IP68 standards. The aluminum frame feels really sturdy and Sony claims excellent anti-twist and bend characteristics.

Let's kick the tour off around back - probably the most distinctive feature in Sony's new "Ambient Flow" design. The arch on the Xperia XZ2 is not nearly as pronounced as the one on the XZ2 Compact, but it is still quite a novelty in the Sony world. The slope is not limited to one axis either - the back actually comes down on all sides. We have to admit, the way glass transitions into the metal frame makes for an eye-catching appearance. The only real complaint we have in terms of aesthetics and it's a nitpicky one, is the way the back tapers into the frame of the phones, leaving a distinct edge, which you can feel with your finger. 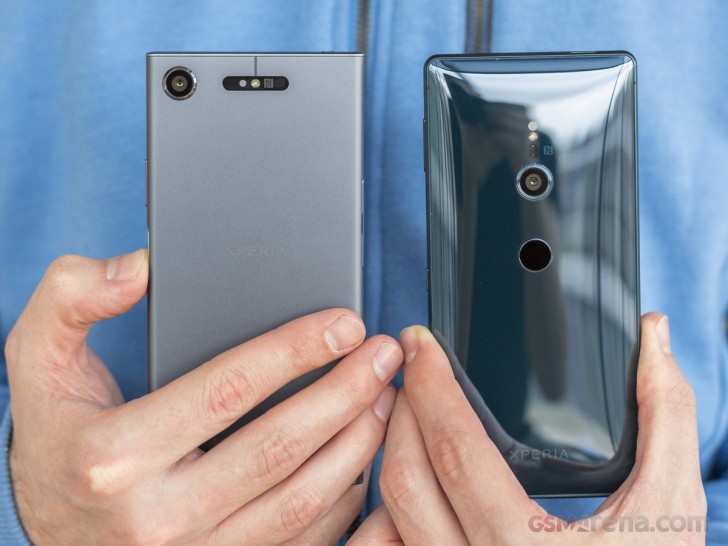 Sony has moulded the entire back from Gorilla Glass 5, curving it with the goal of making the body more ergonomic while creating extra space for the hardware inside. It also looks quite flashy at first glance.

However, while the phone indeed feels very comfortable in the palm, that doesn't change the fact that it's slippery enough to slide off any table and that it quickly turns into a fingerprint mess.

The phone's substantial thickness also means the adding a protective case on the back results in the phone feeling way too chubby for a modern-day flagship.

We couldn't shake the feeling that the back's reflective surface is quite like on the HTC U11, although, perhaps lacking some of the depth layered effect. The back comes in Liquid Black, Liquid Silver, Deep Green (or Petroleum Blue depending how you word your colors) and Ash Pink.

Overall, the back is stunning in looks, provided you manage to keep it smudge-free.

Xperia XZ2: back side • camera array • in the hand

The arched back also houses a fingerprint reader now - a first for Sony. We don't appreciate the relatively low position since it's actually the camera lens where you normally rest your index finger.

The reader here is still just as snappy as we remember from previous generations and, naturally, always-on. It wakes up the phone from standby as quickly as pressing the power button.

While the Xperia XA2 and the XA2 Ultra already laid the ground for the new fingerprint placement, the 18:9 aspect ratio of the XZ2's display is a real Xperia first.

Sony didn't do anything too crazy with the screen - it is thankfully still notch-free, but we now enjoy a more modern looking with a tall aspect ratio and reduced top and bottom bezels.

That being said, one thing we would have loved to see was the minimal side-bezel design of the XA2 and XA2 Ultra. For better or worse, the XZ2 has a generous amount of plastic on all sides on its extra-tall panel.

Sony Xperia XZ2 from the front

The slimmed down top bezel is perhaps the reason for the selfie camera resolution downgrade - 5MP, down from 13MP. Still, Sony did find enough room for a powerful stereo setup. In fact, they claim it is 20% louder this time around.

The earpiece still doubles as one of the speakers, while the other one is tucked away in a slot right between the bottom chin and the bezel of the device. Without spoiling the loudspeaker section too much, we will say Sony's loudness claims are not misguided. 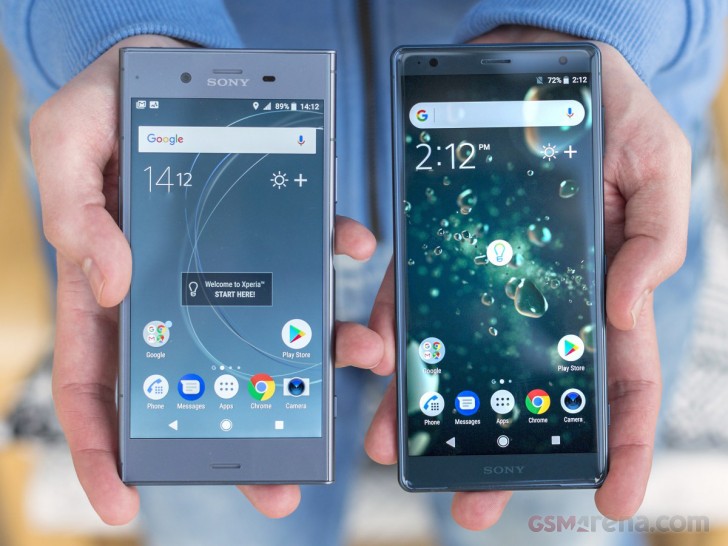 Also on the front of the XZ2, we have an RGB LED, tucked away in the top left corner and a sizeable Sony logo, this time underneath the display.

The entire front panel is covered by a Gorilla Glass 5.

The front glass has rounded edges on all sides attributing to an overall quite modern look - definitely our favorite feature of the new design.

On to the sides now. The back-mounted fingerprint reader is not the only novelty in the XZ2's control scheme. The volume rocker and power button have been moved around. The volume keys are now positioned way too far from the power key for comfortable use. The power key is also too small and doesn't have any distinct surface.

Double tapping the power key starts the camera - one of our favorite shortcuts on Android, however since Sony phone still come with a hardware camera key, which can also start the camera, there is a bit of redundancy here.

The SIM tray is on the top of the device. Since the phone, we're reviewing is Dual SIM, the tray is a hybrid one, which can take either two SIM cards or a SIM card plus a microSD card. The phone restarts every time you pull it out. Just like good old times.

Of course, there is also the elephant in the room - with the XZ2 Sony has officially joined the "courageous" ranks of manufacturers to ditch the 3.5mm audio jack.

At least, as some form of mitigation, every XZ2 and XZ2 Compact will ship bundled with an Y-style Type-C dongle, that allows for simultaneous charging and audio out.

Without an audio jack, the bottom of the phone is left with a single Type-C port, only accompanied by a small microphone hole.

Fingerprint reader in backside. Xperia performance it was power/fingerprint button and side mounted. And Sony is implementing that configuration back, because it's most logical placing of a button.