Sony Xperia XZ Premium leaks, due for release in May

Sony has a new 4K-screened Xperia coming out and it's the Xperia XZ Premium. A leaked press image shows the upcoming flagship with its Chrome mirror finish on the back (as on the Xperia Z5 Premium) and confirms it will continue using the current design scheme, established by the X series.

The leaked image has the date of May 7 under the clock which could point to a May release. The clock shows 10:35 - perhaps a hint the XZ Premium will use a Snapdragon 835 when it launches? 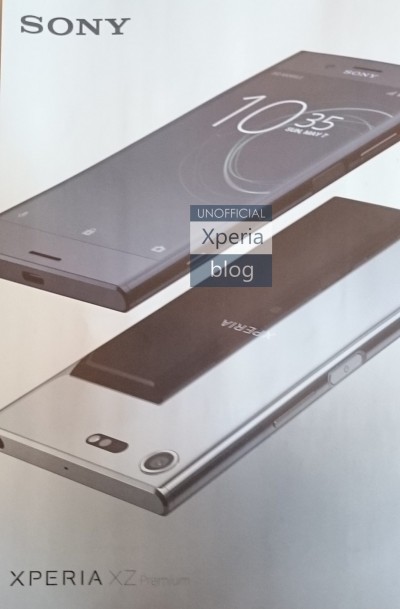 There's not much else to go on from the leak itself but rumors suggest the Sony Xperia XZ Premium will have a 4K HDR screen and a clever new 20MP camera with 1.22μm-sized pixels and the ability to shoot super slow-mo video at 960fps.

The camera will also have a Motion Eye predictive focus (perhaps similar to Sony's dedicated camera line's Eye AF), a new super low-light performance mode and an anti-distortion feature, which suggests the camera will have a wide angle lens like the Xperia XZ (24mm).

There's not much else here but we expect to find all about the Sony Xperia XZ Premium at Sony's event at the Mobile World Congress in two days.

Following up my earlier post of FEB. 26 regarding the SONY Xperia XZ Premium: Now that MWC has come and gone looks like we now know all about the new SONY flagship. SONY has finally made the needed improvements in RAM (up from 3 to 4 GB), but th...

I'm thinking Sony keeps making Xperias as a test bed for the hardware they later sell to the other manufacturers. They are actually doing good on that and the Xperias are actually making a profit now.

Pretty sure every Xperia phone show 10:35 clock, it has nothing to do with SD 835