The Sony Xperia Z1 Compact comes with the custom Sony gallery, called Album. Images are organized into groups of thumbnails and sorted by date.

You can resize the image thumbnails, either with a pinch gesture or a sideways swipe. The whole thing is very responsive and hundreds of thumbs fall in and out of differently sized grids in a smooth animation.

There is a second tab here, My Albums, which includes online albums (PlayMemories, Facebook, Picasa, Flickr) along with albums stored on devices in the local network. Alternatively, you can turn the Z1 Compact into a DLNA server and view photos from the device on a computer or compatible TV.

Also here are some special albums - Maps and Globe, which use the geotagging info to sort photos by the location at which they were taken, and faces, which groups photos by the faces of the people in them.

The video playing app is dubbed Movies and it too has a great custom UI, reminiscent of HTPC interfaces. It's connected to Gracenote, which helps you find additional information about the movies and TVs you have on the phone. It will even download posters for them and for movies, it will download metadata like genre, synopsis, director and cast.

The good news is that Sony has fixed up its codec support and the Xperia Z1 Compact plays just about everything - AVI (DivX, XviD), MP4 and even MKV. Just about. DTS, DD and AC3 audio are not supported.

Watching a video on the Xperia Z1 Compact

The video player does support subtitles and it gives you access to both sound effects (the same as the Walkman music player) and display settings (X-Reality, White balance and Brightness are of interest here).

The updated Walkman music player is part of the equipment of all recent Xperia smartphones. It features Music Unlimited integration and is not above trying to sell you songs, but you can hide the Music Unlimited stuff.

The Walkman interface is based on tiles that sort your music collection by Artist, Albums, Playlists, all songs and even the songs your friends are listening to (but you need to connect the player with your Facebook account).

The Now Playing screen shows a carousel with the tracks in the current playlist and the usual music controls below that. You can swipe left and right to move between tracks and view the current playlist (where you can rearrange the songs). If you tap on the album art three more buttons appear - add to playlist, star and the Infinite button. The latter will help you find the track's video on YouTube, look up info about the artist on Wikipedia and search for lyrics on Google.

Gracenote is used here too and it can automatically download information about your tracks and album art.

Dynamic normalizer evens out the differences in volume between tracks, which is great if you've mixed multiple albums from multiple sources.

Google's own music player called Play Music is also on board. The Listen Now feature tries to determine what you like and the sequence of your track-changing so that it can start offering you music you might like to play next.

The Sony Xperia Z1 Compact also features an FM Radio aboard complete with RDS support. The app features multiple visualizations and integrates with TrackID to recognize the currently playing song. You can even directly send an "I'm listening to..." post to Facebook.

Sony has updated the FM Radio app and as a results it's now more stable than it was on some recent midrange Xperia smartphones.

Audio output is clean but quiet

The Sony Xperia Z1 Compact did excellently in the active external amplifier part of the audio quality test. The smartphone posted great scores top to bottom with the below average volume levels being the only weak point to its performance.

Better still, there's only a slight quality drop when you plug in a pair of headphones. The stereo crosstalk rises significantly, but distortion remains undetectable and signal-to-noise ratio and dynamic range remain great. Volume levels are below average here as well, so we can't give perfect marks for overall performance. 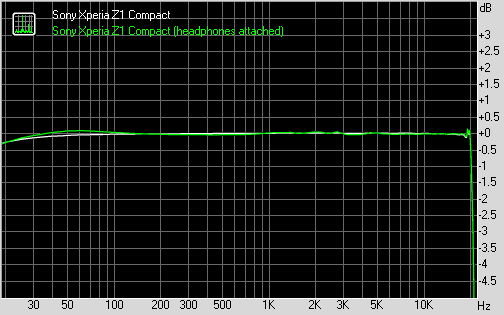 Its been 4 years that I have Sony Xperia Z1 Compact and never failed me. only 2 times I changed the battery and I can open heavy files with it easily. I Love it, it is a loyal phone :_)

How can I prepare battery for Z1 compact ?? Or how can I get new one