The Sony Xperia Z Ultra comes with the custom Sony gallery, called Album. Images are organized into groups of thumbnails and sorted by date.

Pictures is the main tab and one of its features managed to impress us: you can make the image thumbnails bigger or smaller, either with a pinch gesture or a sideways swipe. The whole thing is very responsive and hundreds of thumbs fall in and out of differently sized grids in a nifty animation.

There is a second tab here, My Albums, which includes online albums (PlayMemories, Facebook, Picasa) along with albums stored on devices in the local network. Also here are some special albums - Maps and Globe, which use the geo-tagging info to display photos where they were taken, and faces, which groups photos by the faces of the people in them.

Video player has good UI, codec support could have been better

The video player is dubbed Movies and it too has a great custom UI, reminiscent of HTPC interfaces. It's connected to Gracenote, which helps you find additional information about the movies and TVs you have on the phone. It will even download posters for them and for movies, it will download metadata like genre, synopsis, director and cast.

The Xperia Z Ultra didn't experience any difficulties playing 720p and 1080p videos. It loaded them pretty swtiftly and that's no surprise considering the hardware that's under the hood. MP4, DivX, X264 and MOV files played without a glitch, too.

However, Sony still refuses to pre-install codec support for AVI, MKV and XviD formats. The Movies player didn't play them at all, and neither did it open AC3-enabled DivX. That's easily fixable though with a quick stop over at the Google Play Store where you can get a hold of a third-party video player with an enhanced codec support

Watching a video on the Xperia Z Ultra

While that's certainly an option, you lose the Gracenote features - the Movies app always plays videos (or tries to, anyway) with its own player rather than what you've set as system default. We tried BS Player and it worked well with the aforementioned video formats.

The updated Walkman music player, which is present on all 2013-Xperia smartphones is also on board. It offers the same cool interface as before, but this time it has more options for sound enhancement.

And audio fans will be pleased as there is a configurable 5-band equalizer with bass adjustment. However dedicated audiophiles might want to consider alternatives off the Play Store, with support for a 10 or even 20-band equalizer.

Google's own music player called Play Music is on board as well. It features the Listen Now feature, which tries to determine what you like and the sequence of your track-changing so that it can start offering you music you might like to play next.

The Sony Xperia Z Ultra also features an FM Radio aboard complete with RDS support. The app features multiple visualizations and integrates with TrackID to recognize the currently playing song. You can even directly send an "I'm listening to..." post to Facebook.

Sony has updated the FM Radio app and as a results it's now more stable than it was on some recent mid-range Xperia smartphones.

The Sony Xperia Z Ultra performed excellently in the first part of our traditional audio quality test posting excellent scores top to bottom. And while there were no weak points as far as clarity is concerned, the surprisingly low volume levels bring the overall score from perfect down to excellent.

There's very little quality drop when you plug in a pair of headphones. The stereo crosstalk rises somewhat and some distortion creeps in, but neither of those is easy to notice without dedicated equipment. Volume levels remain average, but the overall performance is still very solid. 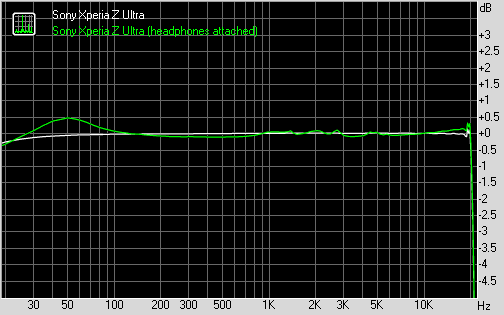 Why would the display turn off during calls? This singular fact rubbished whatever advantage the Z Ultra possesses. secondly the screen cracked at the slightest provocation. For me, durability is zero. No one want to buy and expensive item and...

I've got a Samsung s7 edge and it's a damn good device.. but you'd have to prize my Z ultra from my cold dead fingers before I'd part with it.