The TCL Plex is the company’s first own-branded smartphone and it became available in October. Today, the phone gets a major update, which delivers Android 10 and many improvements.

The main camera will be faster when shooting in 48MP mode, video recording should be smoother to boot. The selfie camera got a performance boost and improved skin color filters.

This Android 10 update also brings Dark mode and Game mode, gesture control for the Google Assistant plus 30 shortcuts for the smart key. Additional changes include support for music player controls on the lockscreen.

For Brits, VoLTE is enabled on EE and O2, VoWiFi is available in the UK market as well. 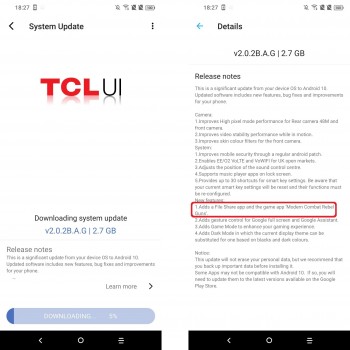 Note that the update, v2.0.2B.A.G, is a hefty 2.7GB download and it includes two new apps – File Share and Modern Combat Rebel Guns. The latter is an shooter by Gameloft, which has previously been preloaded on some Motorola phones (but we can't find it on the Play Store). You can remove the game, but it gets restored after factory resetting the phone.

This article is from January, but we are in April and the Android 10 is not available for my TCL Plex yet. I’ve checked with other TCL Plex owner and she is in the same situation. Still running Android 9 with December 2019 security package

Soooo, just bought this phone in Australia and I'm having some wicked wifi issues. Wifi driver stack just stops transmitting and receiving data a few times a minute. Had this issue 2 years ago when I tried to buy a Nokia 8 ended up returning that one...

This is no surprise to me. Actually I'm surprised this update doesn't have more bloatware (but more will come.) TCL also makes phones under the Alcatel brand name, among some other brands that they use(d.) This company is not to be trusted. They ...