Tecno is not exactly a globally renowned phone brand. They operate mainly in Africa, Southeast Asia, and Latin America. Tecno phones are, hence, designed in a rather locally-tailored manner and often aim to deliver the best possible value and lowest price point. A quick look at our Tecno page and you will see that they are not sitting still. They've started regularly coming up on our radar, and the Camon 16 Premier is the first Tecno device to officially make it to our grounds for a full review checkup. 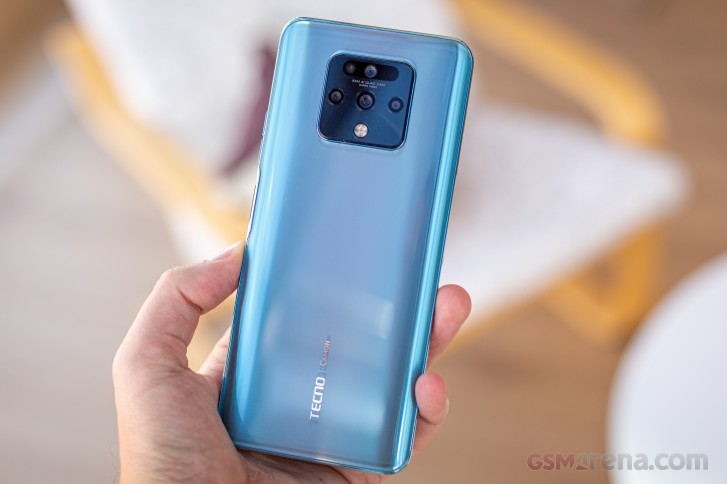 One noteworthy consequence of Tecno's aggressive price-subsidizing strategy is the high number of pre-loaded apps and various ads, baked right into their phone's OS. That, unfortunately, tends to be one aspect that instantly stands-out when looking at Tecno devices from a Western standpoint.

On the flip side, however, you can't complain that the their devices lack character and visual distinction.

Tecno's parent-company, Transsion, is not very well know to end-users by its name. Still, many consumers in the markets we mentioned will recognize at least one brand in their portfolio which also includes Infinix and Itel. For instance, the three brands counted together put Transsion group at the sixth spot among smartphone manufacturers in India just a year ago, just to put things into perspective.

With the introductions out of the way, the Tecno Camon 16 Premier is the latest device in Tecno's lineup. On paper, it seems to offer amazing value for its modest MSRP of about EUR 230 ($300). A large, fast 90Hz display, four cameras, including a 64MP Quad-Bayer main snapper, with 4K video capture support and EIS, two selfie snappers, one of which also a Quad-Bayer unit, a respectable MediaTek G90T chipset, with 8GB of RAM and 128GB of expandable storage and a sizeable 4,500 mAh battery, even complete with fast 33W charging.

If all of this sounds incredibly familiar to you, it should. Minor design differences aside, the Tecno Camon 16 Premier is almost a carbon copy of the Infinix Zero 8. A phone which we also recently put through our rigorous review process.

Just because Transsion and its subsidiaries, like Tecno have managed to carve themselves a nifty little niche, doesn't mean that they are universally beloved and free of controversy. On the contrary. After publishing our Infinix Zero 8 review and reading many of your comments and opinions, it seems that many users don't hold some of the company's practices in high regard. Especially the high volume of ads and sponsored content meant to subsidize devices and bring down costs.

For better or worse, that's the reality with the Tecno Camon 16 Premier, as well. Sure, there are certain differences between the Camon 16 and the Infinix Zero 8. But, overall, even on a software level, the two are nearly identical. Hence, you can expect us to frequently reference the Infinix Zero 8 review as we go along.

Straight off the gate, our first reference has to do with the retail box and accessory package of the Tecno Camon 16 Premier. Looking at it, next to the Infinix Zero 8, it is almost like both came out of the same factory. In fact, that might actually be true. Granted, the graphics on top of the box of the Camon 16 are nowhere near as eye-catching as those on the Infinix Zero 8. In fact, that's merely an extension to the fact that the Camon 16 Premier has a slightly tamer and less-distinct design than its sibling. 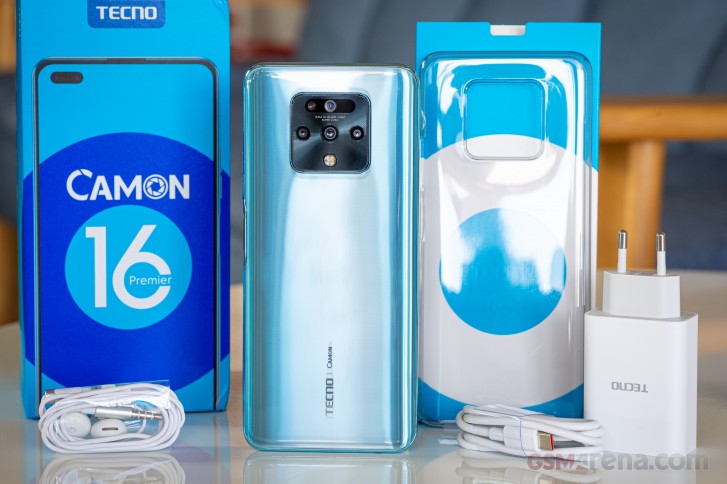 The box itself is still a sturdy, two-piece design, complete with a secure cradle, made from plastic, on the inside. No complaints there. In terms of accessories, you get a wall charger, rated at 5V@3A and 10V@3.3A, which is how the Camon 16 Premier gets its 33W of charging. Alongside that, a USB Type-A to Type-C cable, with a rigid rugged finish and orange accents on the connectors.

Also in the box - a pair of earbuds, complete with a microphone and the company branding. Nothing too spectacular in terms of quality, but solid enough for a free add-on. Same goes for the transparent plastic case, included in the box. Slightly hidden alongside leaflets, there is also a screen protector. It's also nothing particularly special, just a soft one.

Overall, this is the exact same accessory package that we saw on the Infinix Zero 8 and this is hardly a complaint. On the contrary, there is a lot of added value here. In fact, everything a new user might need to get up and running straight out the gate with the Tecno Camon 16 Premier.

I can't stop using tecno phones ooo because the has a guilty camera and the good battery 🔋 too, the phone too is original i love tecno phones

This phone is just another hype. Am very disappointed The camera is like an 8mp camera. Never buying anymore techno phone....try redmi phones they are so much class