Tecno doesn't really have a consistent look and a single design language, but there are still some noteworthy similarities to be observed across current families, like the Camon 19 and the Spark 9 lines. This year, the monolithic camera islands seem to have been replaced with this distinctive large dual camera lens/hump design on the back of the phones. 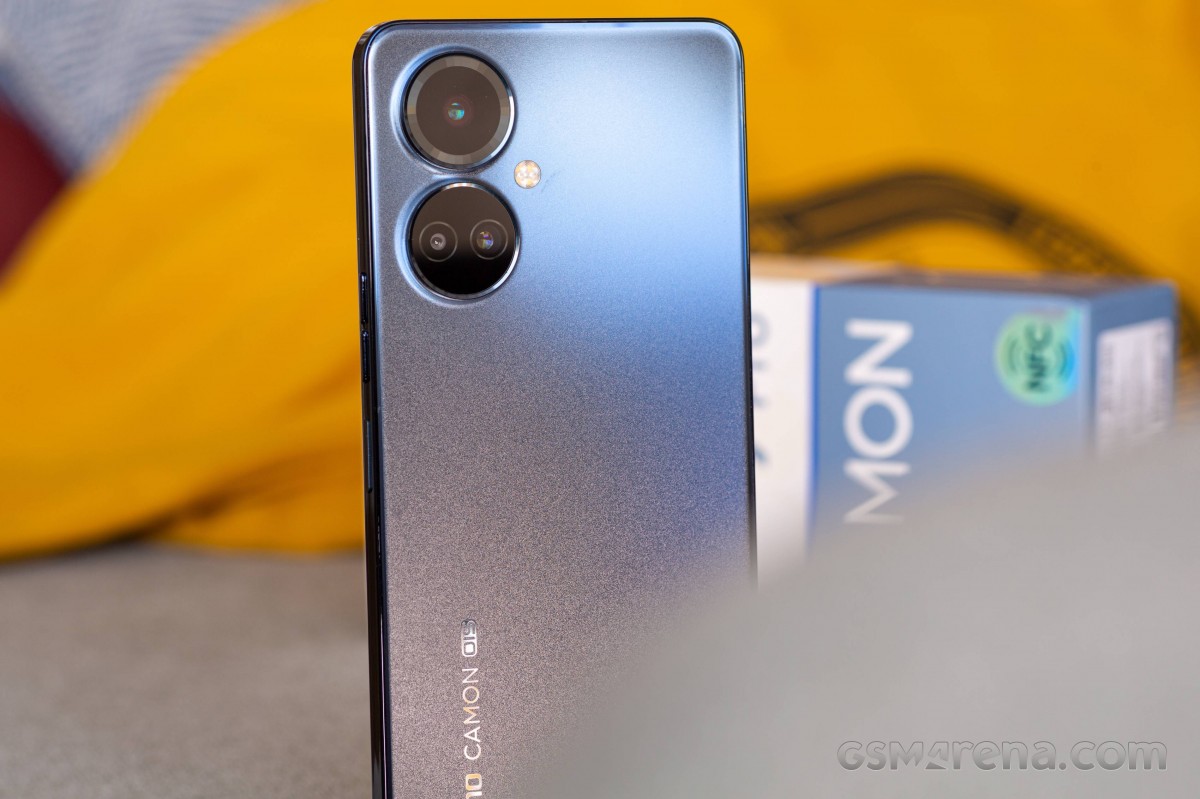 It is a bit polarizing around the office, but the general consensus is that the look is modern and in keeping with current trends. So Tecno has that going for it for sure.

The general shape of the Camon 19 Pro isn't particularly special. The mostly flat sides and rounded corners have a bit of an iPhone vibe to them, but the similarities are slim at best. The Camon 19 Pro is comfortable to hold, and its 204 gram body is well balanced and doesn't feel too heavy at all. Especially for its 166.8 x 74.6 x 8.6 mm size. 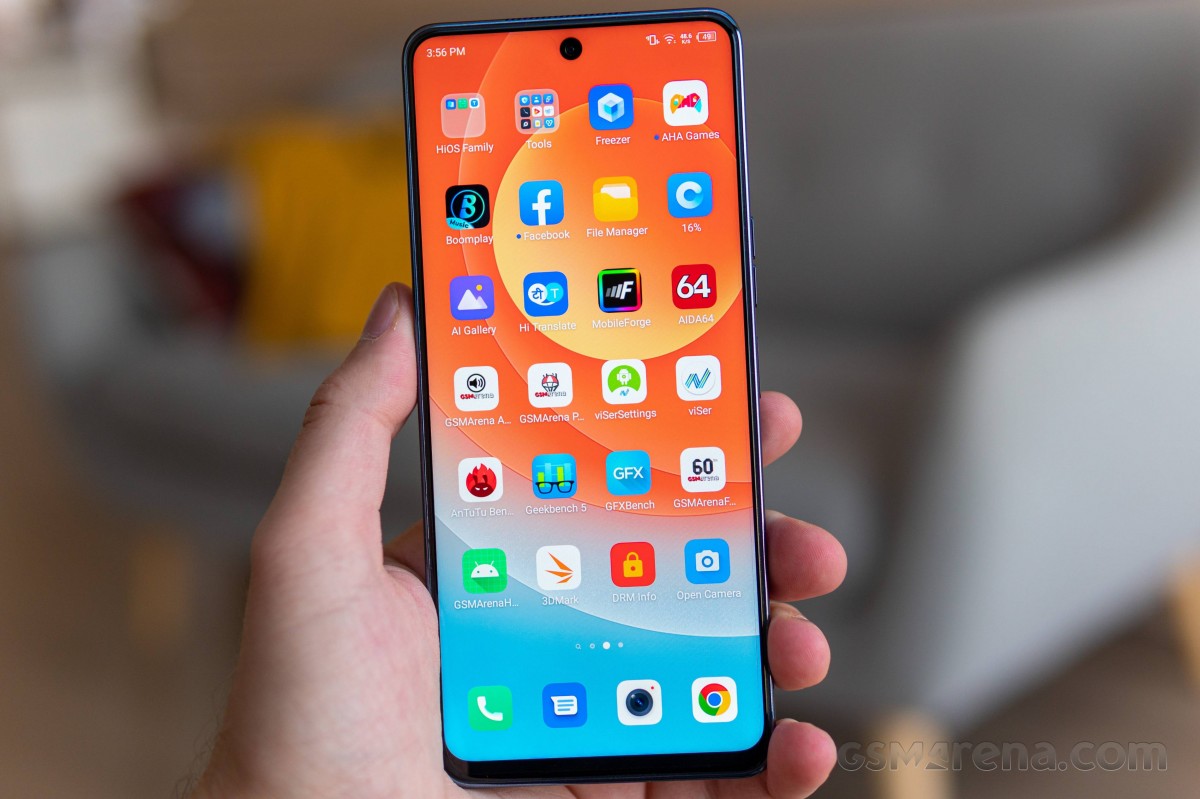 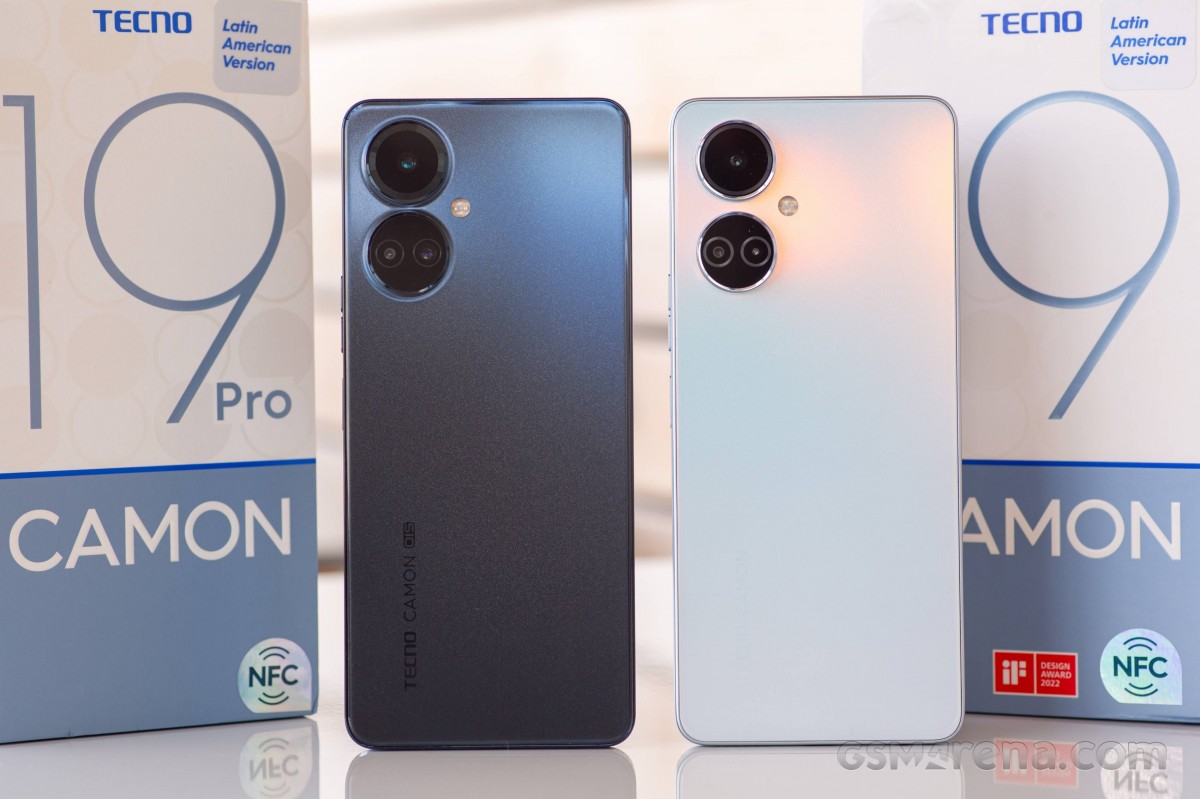 The Tecno Camon 19 Pro is available in two color options - Polar Blue and Eco Black. The former has that slick "oil spill" effect with a bunch of visible colors, depending on how the light hits it. The black one is much tamer in that regard. It looks kind of blue at some angles.

The finish on the back is silky to the touch and doesn't attract or retain too many fingerprints, which is good. The vertical Camon writing on the back seems to be embossed, which makes for a nice effect.

Overall, the phone looks good without unnecessarily trying to punch above its weight class and imitate any fancy materials or construction.

As we said, the Camon 19 Pro feels comfortable in its pretty much entirely plastic skin. There is a noticeable color and finish difference between the back panel and the middle frame, but both are still like Apple popularized "unapologetically plastic". 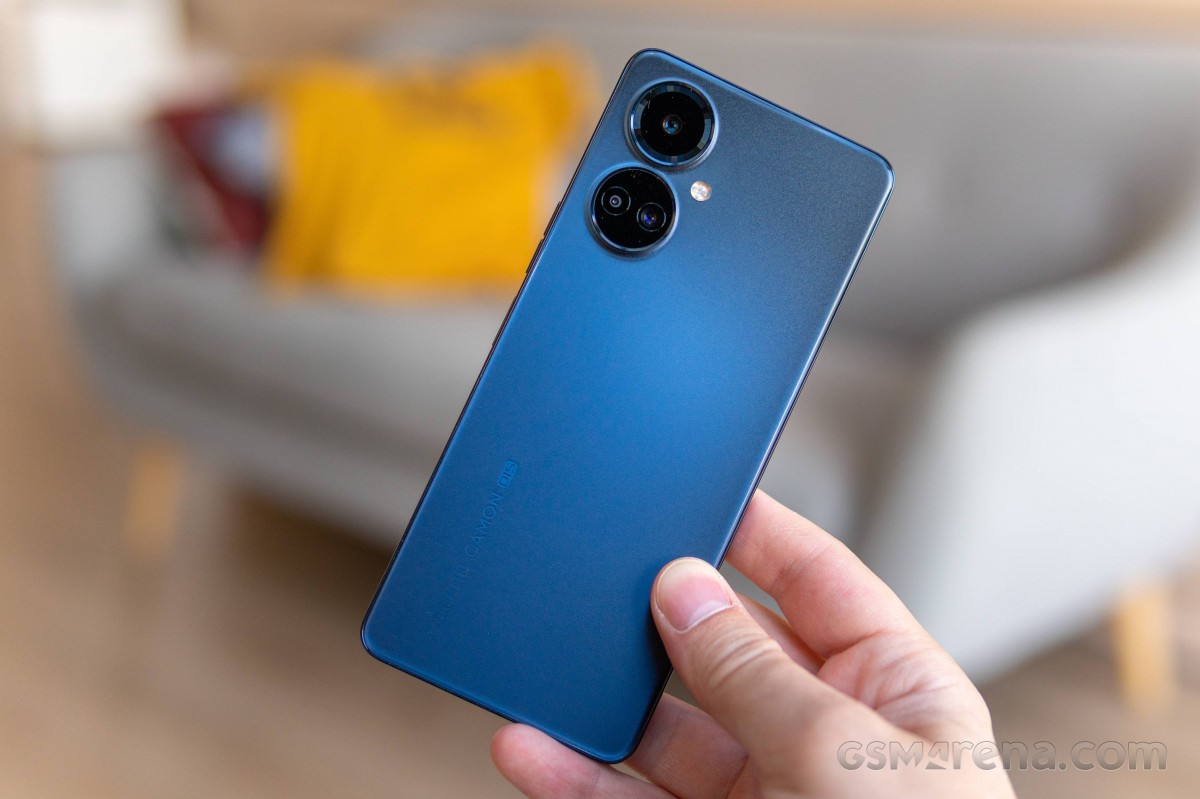 The Camon 19 Pro uses a standard "sandwich" design. The back panel is definitely plastic, which means you do have to take care of it since the finish is prone to scratching. We managed to scuff up our review unit fairly quickly.

That is not to say that it feels flimsy, though. On the contrary, the back panel is nice and firm with practically no flex and none of that annoying "hollow" feeling underneath it.

The middle frame is also all plastic, which allows it to be one solid piece, uninterrupted by any antenna lines. Its finish is a bit glossier than the back panel, which makes for a nice visual contrast. That, however, also means that it retains grease a lot easier and will almost constantly be dirty. 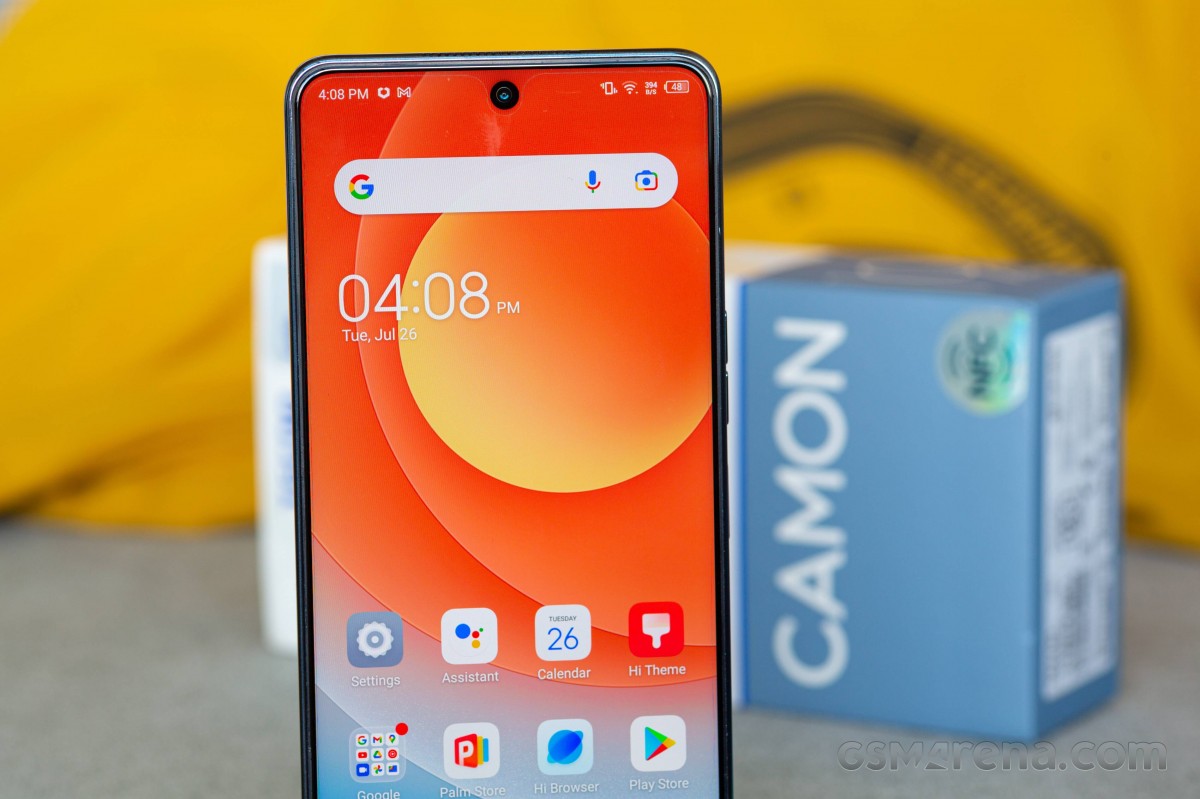 There is no mention of glass in the PR materials anywhere on the Camon 19 Pro. It is safe to assume that its front side is plastic too, which is a bit of a bummer. At least the phone ships with a pre-installed plastic screen protector. We would have preferred glass, but it is still better than nothing.

The Camon 19 Pro, unfortunately, lacks any formal ingress protection rating. That being said, though, a big red rubber gasket is clearly included around the inside of the SIM card tray, which means that it probably has the potential to survive some of the elements.

The Camon 19 Pro has a standard control scheme and layout. Its physical buttons are all on the right-hand side. These include a volume rocker, which offers nice travel and tactile feedback and a fingerprint/power button combo. 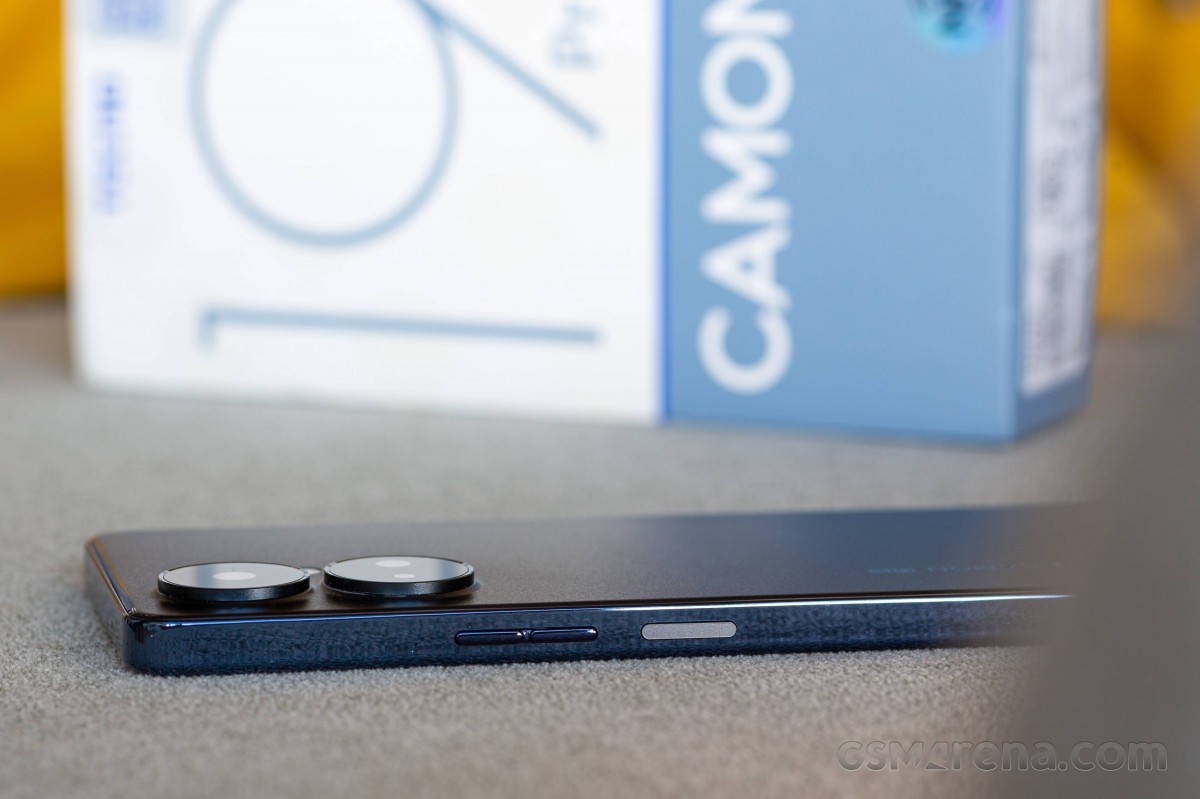 The latter is an actual button that can be clicked, though you don't really need to click it to unlock the phone since the fingerprint reader part is always on. The reader itself is a traditional capacitive one that works well and is both snappy and accurate. It is a bit on the slim side, which diminishes its usability a bit. 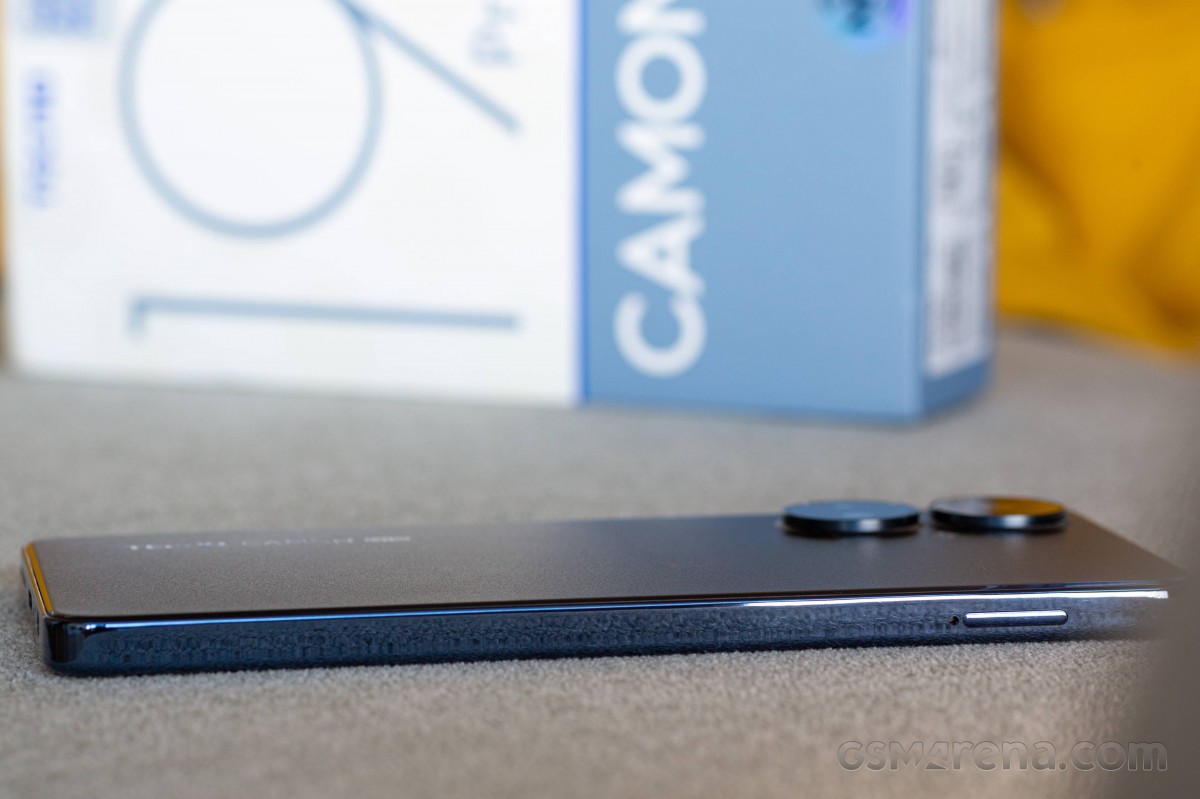 Also worth noting - the position of the power button is not ideal as it is way too low vertically on the frame. Perhaps that will be less of an issue if you have smaller hands, but we found the Tecno Camon 19 Pro a bit hard to unlock. 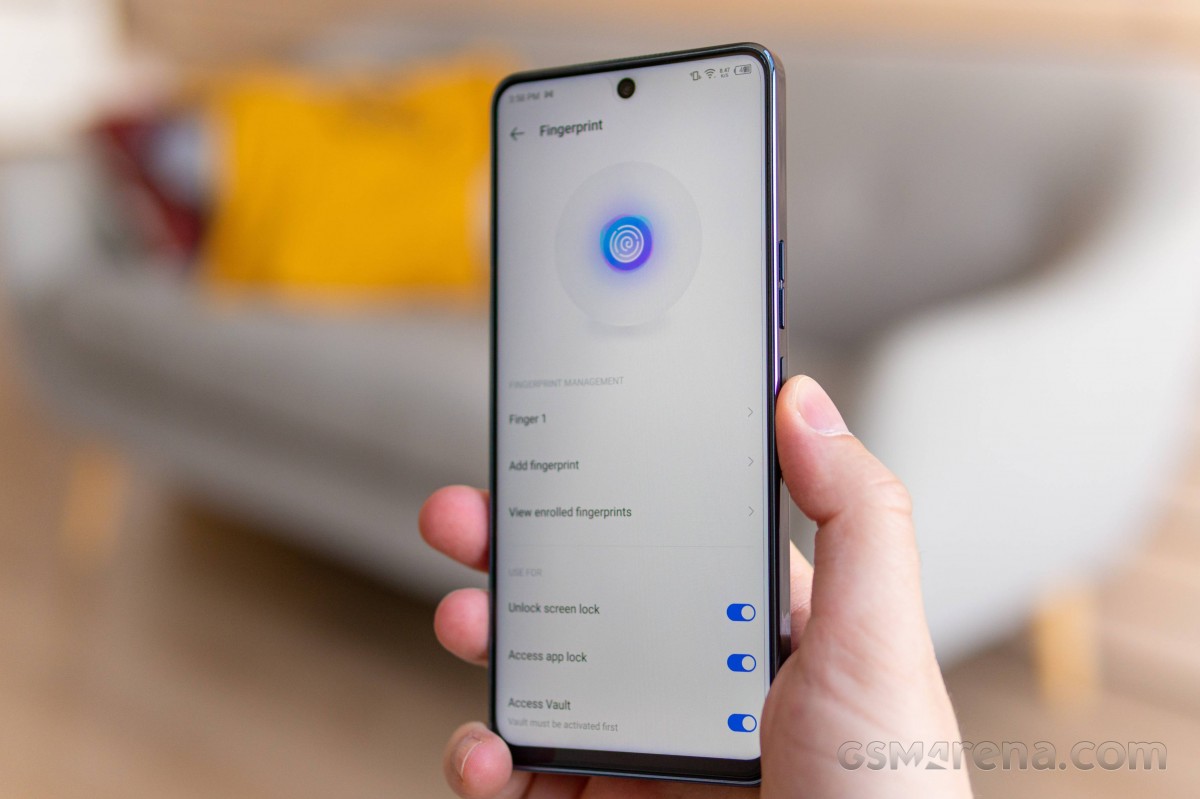 The top bezel of the Camon 19 Pro is mostly empty. Well, depending on whether you consider the earpiece grill as sitting on the front or the top of the phone. It is kind of in the middle, honestly and very well hidden. The very end of the same grill also houses the light sensor in a very minimalistic fashion. 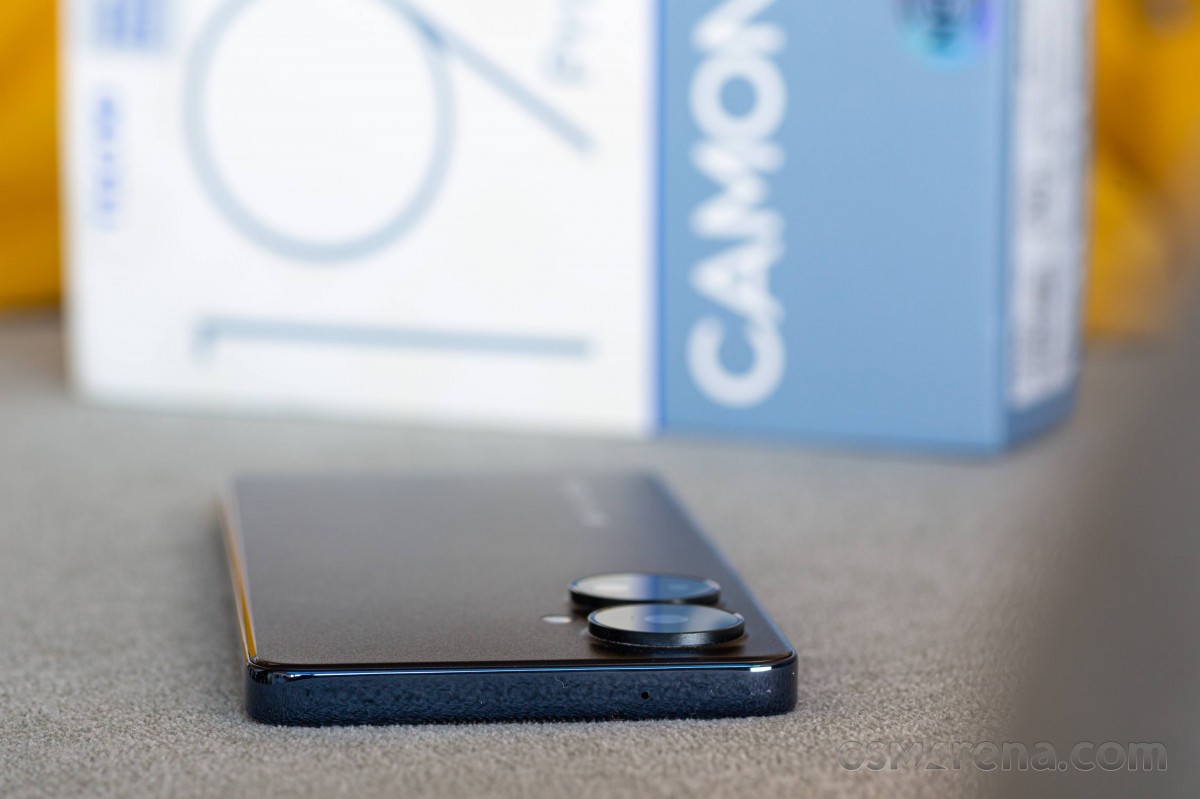 The bottom bezel is a lot busier. There is a single, bottom-firing speaker on one side, a 3.5mm audio jack, and a main microphone on the other. The USB Type-C port in the middle is wired for USB 2.0 data transfer, which means a maximum of 480 Mbps. It also has USB OTG functionality for attaching things like a USB thumb drive or HID devices like a mouse and keyboard. We tested all that, and it works well. There is no advanced USB Alt-mode functionality beyond that. No video out or anything like that. 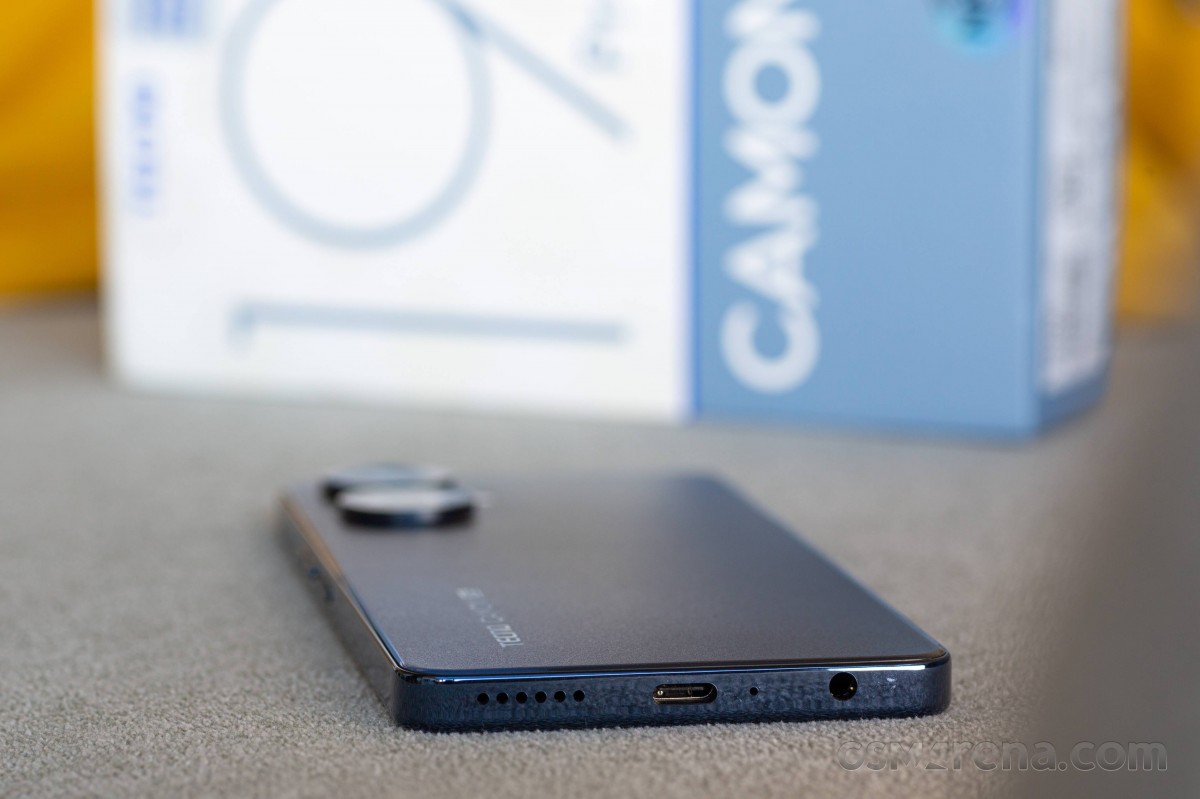 Speaking of things that are absent - there is no notification LED on the Camon 19 Pro, which is not surprising since it's been the norm for some time now.

On the flip side, the Camon 19 Pro does seem to have a full set of actual sensors instead of virtual ones. There is an icm42631 accelerometer, a qmc6308 magnetometer, a compass, an icm42631 gyroscope, a gravity sensor and an stk31860 light sensor. All of them seem to work just fine. The Elliptic Labs proximity sensor seems to be polled at a slightly slower rate by the system, so it might take a couple of seconds for the display to turn off during calls. Nothing major, though. 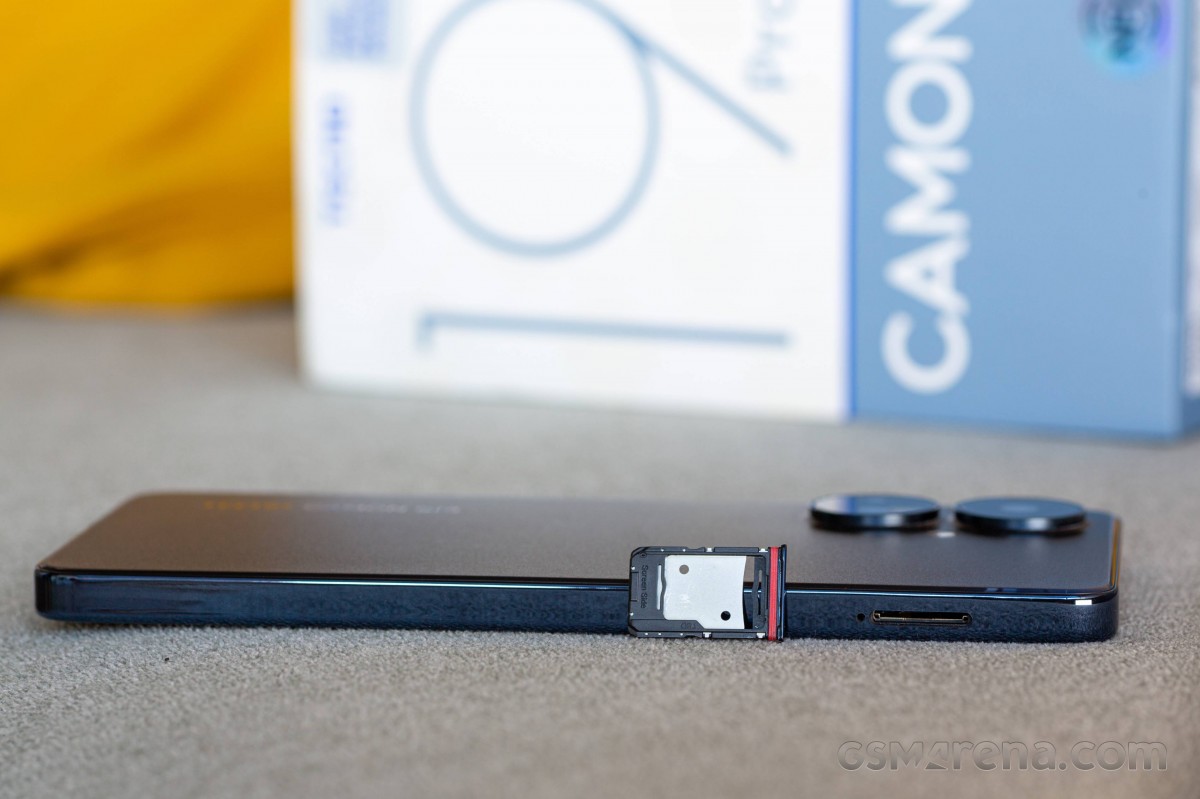 In terms of connectivity, beyond the USB we already mentioned, the Camon 19 Pro has Wi-Fi ac, Bluetooth 5.2 with LE, GPS, FM radio and NFC with Google Pay support. It is a dual-SIM device with two nano-SIM slots and dual 4G standby. The one notable omission is an SD card slot.

They are a million dollar tech company why do they need good comments on GSMArena.

It's simply false either way. No one copied here, a smartphone's design is never decided only 1 month before release, Zenfone 9's design and Tecno's design are both about half a year old if not even more.