The Realme 9 (4G) will be the company’s second phone with a 108 MP sensor, following the Realme 8 Pro. However, the 8 Pro used the older ISOCELL HM2, while the 9 is getting a brand new HM6 sensor.

The company will be marketing the new camera under the name “ProLight”. As it explains, the ISOCELL HM6 uses a new NonaPixel Plus layout (3x3 binning), which combined with other improvements will increase the sensor’s light gathering ability by 123% compared to the HM2. 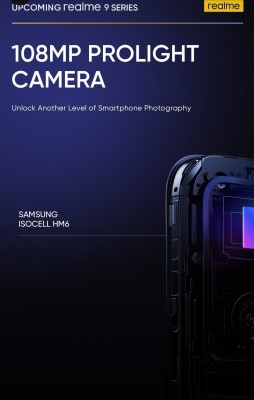 Based on internal testing, Realme says that the new camera produces brighter photos with better color reproduction when shooting in low light.

The Realme 9 will also use the “ultra-zoom” feature that is built into the HM6 sensor for lossless zoom using the main camera. Samsung is yet to officially unveil the new sensor – the Realme 9 will be the first to use it and the phone itself is still pending announcement. Expect to hear more details about the HM6 and the new NonaPixel Plus arrangement soon.

Realme 9 SE launches with an SD778G and 144Hz display, Realme 9 tags along

Our Realme 9 Pro video review is now out

They give all information expect SoC . Possiblities Helio G96 or 6nm new G series Snapdragon 680 or 732