The Redmi K40 will be a 5G phone, MIIT listing confirms

The Xiaomi M2006J10C is back – this will probably launch as the Redmi K40 or perhaps the Xiaomi Mi CC10. Earlier it was spotted at the 3C with a 33W charger, the same that comes in the Redmi K30 Pro retail box. Now the phone has appeared on MIIT.

The Chinese wireless regulator certified the phone for usage on 5G networks. Not surprising, perhaps as the K30 phones are already 5G-enabled thanks to their Snapdragon 865 and 765G chipsets. 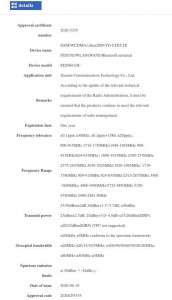 The vanilla Redmi K40 probably won’t use an 800-series chip, though. It was rumored to use the Snapdragon 775, which was supposed to be announced last week, but Qualcomm unveiled the Snapdragon 690 instead – the first 5G chipset in the 600-series and the cheapest of the family. It supports global 5G bands of the sub-6 GHz variety.

Of course, Qualcomm has other 5G chipsets that the Redmi K40 can use, but chances are that we’ll see at least several phones grouped under the K40 name – a K40 Pro, at least.

Xiaomi to launch Redmi 9 in China on June 24