We've been expecting the LG V35 ThinQ for a month or two now but just last week, a report claimed that the device will be AT&T exclusive and will have marginally better hardware than the LG V30S ThinQ. This is because the carrier didn't get LG's current flagship, the G7 ThinQ so this one probably serves as a compensation. 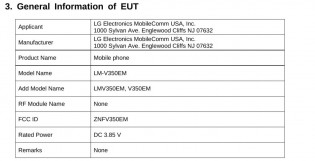 Still, if the earlier reports are accurate, we expect almost identical specs to the V30S ThinQ with the small exception of the camera configuration. The latter is said to include a double 16MP setup instead of 13MP. Also, we expect to inherit the advanced AI capabilities introduced in the G7 ThinQ.

In any case, the flagship phone should be arriving very soon, judging by the frequency of the rumors and the FCC certification.

LG G7 ThinQ goes up for pre-order in the UK

Agreeee But try sony, stay flat for 3years, but LG better than samsung, should fine

Slow down... Your opinion is not the world

"...Jobs said it best. Users don't know what they like, we tell them what to like..." Yeah, he also said the tablet was the device that would kill the PC and take us into the Post PC era. A few years later, the tablet is dying and the PC is as heal...