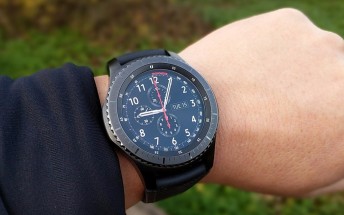 We've known for quite a while that T-Mobile would eventually start selling the Samsung Gear S3 frontier, and today the magenta carrier has thankfully given us some more details on the matter. T-Mobile will commence sales of the Gear S3 frontier on November 18, which is the watch's official release date for the US.

If you want to pick up this LTE-enabled smartwatch from T-Mobile, you'll need to shell out $399 full retail, which interestingly is $50 more than what AT&T is asking (and also what should be the frontier's recommended price). You can add the wearable to your existing smartphone plan at T-Mobile and you'll pay just an additional $5 per month for that.

The "un-carrier" hasn't started taking pre-orders for the Gear S3 yet, even if AT&T has taken that step around ten days ago. It's unclear if there will be any pre-orders for the watch at T-Mobile before its launch, but since that's in just three days anyway it probably doesn't matter.

David, I pre-paid $349 for the LTE Frontier at AT&T last week, it arrives in store tomorrow.

I will never change my mind that all those smartwatch category is total BS. But if have to be honest, Samsung Gear S3 frontier is the only one so far, that makes some sense to have it.