Samsung and T-Mobile have recently released an update for two Note devices: the Samsung Galaxy Note 4 and Galaxy Note Edge. While the update doesn’t bring Nougat, it at least brings the devices to Google’s March security patches. We are already in April, so T-Mobile and Samsung are a little behind with these models as they continue to age. 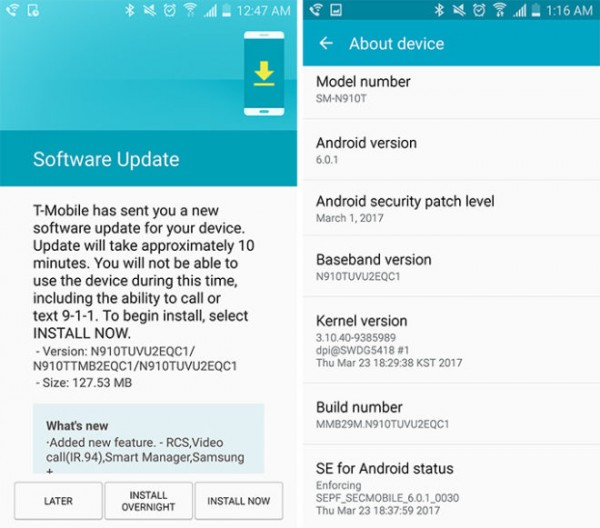 The incoming update is not very large at just under 128MB. The build numbers of the Galaxy Note 4 and Galaxy Note Edge updates are” N910TUVU2EQC1 and N915TUVU2DQC1, respectively.

We don’t expect these two Note devices to get Android Nougat any time soon. In fact, it hasn’t been that long since the AT&T Galaxy Note5 got the major Nougat update just about a week ago.

Ok, I got this update late last night and went to the web to try and figure out why it's made my phone so much faster. It looks better, feels snappy all of a sudden, made me check my system info because I wondered about what version I must be running...

Do you think at some point we will get Nougat on the Note 4? Thank you!

Yes, we got the update, now my phone no longer works. Great job on the update. You forked my phone tmobile