Twitter flips the switch for the new 280 character limit

Today, Twitter has lifted the 140-character limit for its general users to 280. The micro-blogging platform first tested the new limit on a select group of Twitter users, particularly those with large amounts of followers and celebrities. The test period took place over about six weeks, during which Twitter has collected some interesting data.

Only 5% of tweets sent were longer than 140 characters while only 2% were over 190. Mind you, this data was collected before the limit was changed for the vast majority of Twitter users. We’d be interested to learn if we’ll see long tweets all the time, or if people will just keep it short and sweet as they’ve been doing since Twitter launched. 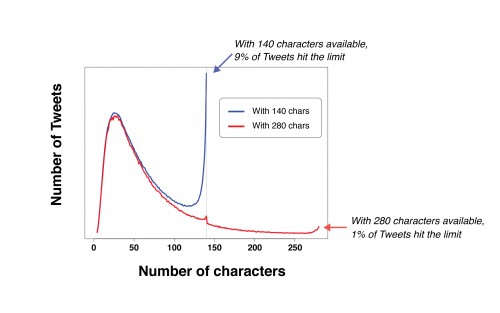 Twitter’s reasoning for the increase in character limits is to bring more users who want a bigger canvas to express themselves more easily. The limit is not being raised for Japanese, Korean, and Chinese users because these languages has much denser characters in their languages, thus not requiring them to cram very much.

Anyway, those whose limits have been raised will see a new circular character limit indicator, which replaces the digital counter.

My wonder is when they flip the switch for banning this social degenerate platform?